Slatoust ( Russian Златоу́ст ) is a major Russian city ​​with 174,962 inhabitants (as of October 14, 2010) in the Chelyabinsk Oblast . She is best known for making blades.

Zlatoust is located in the middle Urals , on the left Ufa tributary Ai , about 1750 km east of Moscow and 110 km west of the regional capital Chelyabinsk . The closest towns are Kussa (23 km northwest of Zlatoust) and Miass (33 km southeast).

Slatoust was founded in 1754 and got its name after the Byzantine saint John Chrysostom , who is called Ioann Slatoust in Russian ( Chrysostomos = "Goldmund" = Russian Slatoust ). The reason for the city's foundation was the establishment of an iron factory in the area of ​​today's city by the Tula industrialist family Mossolow. It is believed that the Mossolows particularly revered John Chrysostom and therefore named the newly founded factory after him, which then gave the city its current name. 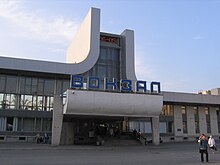 In 1815, in addition to the iron factory, a blade factory was founded in Slatoust, and masters from Solingen were also involved in building it up. In the 19th century, the craft of metal engraving developed in Slatoust, with which the Slatouster blade weapons were decorated. This made them known far beyond the town's borders, and metal engraving is still a traditional local handicraft in the city. In 1857, another arms factory was built in Slatoust, where the first steel cannons in Russia were cast.

In 1865, Slatoust was granted city rights and became a district center in the Ufa governorate , and in 1931 it was declared an independent city. During the Second World War , Slatoust housed over 20 industrial companies evacuated from the European part of Russia (including the First Moscow Watch Factory ). Due to its location far in the hinterland of the Soviet Union, the city was spared from the war, but it is estimated that around 40,000 Slatousters were killed at the front.

To this day, Slatoust is an important center of metallurgy in the Southern Urals, including the Slatoust metallurgy plant (founded in 1902) and the traditional blade factory, whose buildings from the early 19th century are among the city's main attractions. There is also a machine, a packaging and a watch factory in the city, as well as over 300 smaller industrial and service companies.

The M5 trunk road runs south of the city on the section between Ufa and Chelyabinsk . There is a long-distance train station within the city with connections not only to Chelyabinsk but also to Samara and Moscow , for example . The nearest airport is near Chelyabinsk. In inner-city public transport, buses and regular taxis play a role, and Slatoust also has its own tram network , which consists of two lines.