Since the 11th century, Russian colonists have been advancing from the territory of Greater Novgorod into the (western) Urals . In the 14th century a number of settlements were established in the northern Urals and incorporated into Veliky Novgorod . After the fall of the city in 1471, their property went to the Moscow State , along with the lands around the Kama River . After the fall of the Kazan Khanate in 1552, Russian influence expanded to most parts of what is now the Republic of Bashkortostan and Udmurtia on the western side of the Urals (now part of the Volga Federal District ). 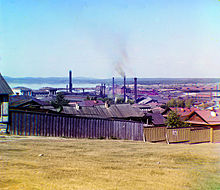 Ironworks on the Isset near Yekaterinburg around 1910

In the 17th century the eastern Urals in what is now the Urals Federal District were also increasingly populated. Russian settlers brought with them advanced technologies, farming methods and craft techniques. This changed the lifestyle of the area. An agriculture specialized in grain cultivation, pre-industrial trade (wood, leather, ceramics, blacksmithing etc.) and a trading network developed. At the same time, the national and social oppression of the indigenous peoples of the region, such as the Mansi , Khanty and Bashkirs, began . 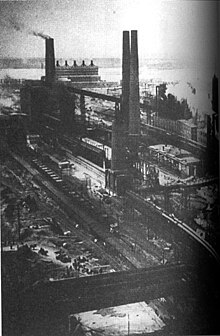 In the 17th century, rich and high quality mineral deposits were discovered in the Ural region. The first iron and copper works were built. From then on, the area of ​​today's federal district was assessed and expanded by the Russian government as a strategic raw material region. More than 60 factories were built in the first half of the 18th century and that number doubled in the 1950s and 1960s. Industrial activity declined in the early 19th century due to the crisis of the feudal system in Russia, and growth slowed in all sectors except gold mining . The largest industrial and commercial centers of the Eastern Urals at that time were Yekaterinburg , Orenburg and Irbit .

As a result of the termination of serfdom in 1861, most of the farmers in the Urals lost their land. The first joint-stock companies appeared in the Urals in the second half of the 19th century, including those with foreign capital. Many old ironworks were rebuilt and a number of new ironworks were built. The onset of industrialization affected the traditional gold and platinum industry, coal mining and mechanical engineering . Many new factories were built. Nevertheless, the Urals lost their status as the main mining region of Russia to the Donbass . The end of the 19th century saw rapid growth in the Ural cities and anti-capitalist movements . The prolonged exploitation of factory workers led to the establishment of social democratic committees demanding improvements in working conditions. These activities culminated around the October Revolution . There was a serious economic crisis which was accompanied by a decrease in agricultural production and a deterioration in living conditions. The situation only improved after 1920. In 1920-21, industrial production had fallen to 12 percent from pre-war levels. In 1926 production again reached 93 percent of pre-war production, and in 1937 it had already reached seven times the production volume. Large new industrial plants were built in Magnitogorsk (1932, iron and steel production), Yekaterinburg (1933, heavy machinery), Chelyabinsk (1933, tractors).

In the German-Soviet War (1941–1945) the Urals formed the industrial backbone of the Soviet Union, as the most important industrial companies had previously been dismantled from western Russia and rebuilt here. From summer to winter of 1941, 667 factories were evacuated to the Urals, and by the end of 1941, 62 percent of Soviet iron production was in the Urals. During the war, 40 percent of Soviet military production came from the Urals region. In 1946 most of the facilities were converted again for civil use. 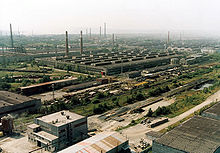 The Urals Federal District is one of the richest districts in Russia. Around 27 percent of all manganese ores , large silver , gold and iron ore reserves can be found here. Lead, nickel and hard coal are also mined in the region. In addition, over 90 percent of Russian natural gas and 65 percent of oil are extracted in the Urals region, especially in the Tyumen Oblast and the Khanty-Mansi and Yamal-Nenets Autonomous Counties .

The Sverdlovsk Oblast is the industrially strongest part of the Ural district. Large companies such as the Evraz Group , to which the NTMK belongs, the aluminum manufacturer SUAL , Uralskaja Gorno-Metallurgitscheskaja Kompanija , the Pervouralsk pipe works, the Uralelektromed combine and the metallurgical production association VSMPO-AVISMA are located in Verkhnyaya Salda . Uralwagonsawod and the United Machine Buildings ( Uralmash-Ishora Group ) manufacture lifting devices and products for machine and transport machine construction.

The Tyumen Oblast is economically interesting because of its extensive oil and gas reserves. 64 percent of Russia's oil reserves and 93 percent of gas reserves are in the north of the region. Russian oil and gas companies generate most of their profits in the region and pay their taxes there. The joint venture TNK-BP , headquartered in Tyumen, produces around 3,000 tons of oil there each year. The technology giant of the oil industry , the Schlumberger company , opened a Siberian training center for young professionals.

The Chelyabinsk Oblast is the metallurgy stronghold of Russia. 27 percent of all Russian rolling stock and 13.5 percent of steel pipes are produced here. The Magnitogorsk Metallurgical Combine is one of the 20 largest integrated steel mills in the world. Firms from the armaments sector, especially from the nuclear sector, occupy a special position. The Chelyabinsk Tractor Plant (TschTS) delivers its tractors, bulldozers and loaders to 30 countries worldwide. In the Oblast Kurgan , Russia's the greatest work is for the production of bridge structures, Kurganstalmost .