The administrative headquarters are in Rostov-on-Don . The largest other cities are Volgograd and Krasnodar . 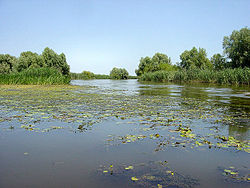 The district forms external borders with Ukraine , Kazakhstan , Abkhazia ( Georgia ) and the federal districts of the North Caucasus , Volga and Central Russia.

The district forms the warmest part of the Russian Federation. The subtropical vegetation zone runs along the Black Sea coast . The growing season lasts over six months a year, about a month and a half longer than in central Russia . Sochi , for example, has an annual average temperature of +14 ° C and remains frost-free all year round. 1570 millimeters of rain fall there every year. The main rainy seasons are mainly in winter. Only about 10 percent of the area is overgrown with forest, a low figure by Russian standards. The forests consist primarily of beeches and oaks . In addition, a large part of the area is ideal for agriculture. Sub-tropical fruits can be grown on the soils, which cannot be cultivated anywhere else in Russia. Wheat and rice are grown in the north . Kalmykia and the Volgograd Oblast have large sheep and cattle farms . The specialty of Astrakhan Oblast is melon cultivation in the Volga Delta . The farms in this region are among the wealthiest and largest in the country. Other important crops are sunflower , barley and sugar beet . The foothills of the North Caucasus offer favorable conditions for sheep breeding and fruit tree crops such as cherries , apricots , apples and plums . The strip of land between Anapa and Sochi forms the only cultivation zone for tea , citrus fruits and viticulture in Russia (apart from the Crimea ). On the territory of the federal district there is a national park , the Sochier National Park and the nature reserves listed below:

The fish on the left in the picture, the westernmost glaciated massif of the Caucasus

The Volga flows into the Caspian Sea in the northeast of the district . There it forms a large river delta in which there is a large and almost untouched diversity of animals and plants. The delta lies at an altitude of −28 meters. The Volga is on the Volga-Don channel with the Don connected, which in the Azov opens and vessel traffic from the Volga to in the Mediterranean possible. The Donbass coal district extends partly into the Rostov Oblast . A large part of the area of ​​the district lies in the Manytn lowlands, which are joined by the Caspian Depression in the east of the district . This means that the relief of the northern part of the circle is flat to wavy. The Caucasus begins south of the Kuban . The mountains in the south of the Krasnodar Territory and the Adygea Republic reach heights of 3,400 meters.

Russians make up the majority of the population of the federal district with 86 percent. The Kalmyks and Adygeja form large minorities . The largest cities are Rostov-on-Don (1,114,806 inhabitants), Volgograd (1,017,451 inhabitants), Krasnodar (829,677 inhabitants) and Astrakhan (530,863 inhabitants). The federation district is densely populated by Russian standards with 33 inhabitants per square kilometer.

Originally the republics of Dagestan , Ingushetia , Kabardino-Balkaria , Karachay-Cherkessia , North Ossetia-Alania and Chechnya as well as the Stavropol region also belonged to the federal district . These federal subjects were spun off by President ukas on January 19, 2010 into what is today the North Caucasus Federal District , which is actually located on the territory of the North Caucasus and its immediate northern foreland .

With the Krasnodar, Rostov, Stavropol and Volgograd regions, the district has both a strong industrial base and a strong agriculture. In the Krasnodar Territory, agriculture , fruit and grain cultivation are dominant. In the times of the Soviet Union, it was specifically developed as an industrial center, but today mainly oil refineries and large companies for the manufacture of tools and agricultural machinery , but also companies in the food industry can be found here.

Mainly oil from Central Asia and grain are shipped via the Black Sea port of Novorossiysk . The Black Sea district is also one of the most interesting tourist destinations in Russia. 73 percent of Russia's thermal springs are concentrated here, and the production of mineral water is accordingly important. In addition, the future gambling paradise “Azov City” is to be built on the Sea of ​​Azov between the Rostov and Krasnodar regions. The Russian Las Vegas is touted as a billion dollar project.

The district is an important cement and coal producer (bordering the Donbass ). There are also deposits of crude oil here, the reserves are estimated at five billion tons.

The German company Claas has been manufacturing combine harvesters and, most recently, tractors in the Krasnodar region for over five years. Knauf has had a plant in Mostovskoj in the Krasnodar region for the production of plasterboard since 2002 . Heidelberger Druckmaschinen has a service facility for overhauling used printing machines in Jesk in the Rostov-on-Don region.

New coal, grain, container and passenger terminals are to be built on the Black, Azov and Caspian Seas . It is planned to modernize the ports of Novorossiysk and Rostov-on-Don and to build new ports in Taman (Krasnodar region) and Olja (Astrakhan region), which should develop into important parts of the north-south transport corridor . The investment budgeted for this is 300 billion rubles. As a result, the throughput of these ports is expected to grow to 270 million tons. According to official information, around 180 million tons of freight are currently handled there each year. That corresponds to 36 percent of the total cargo handling in Russian seaports.

The Federal District of Southern Russia has moved into the public eye internationally thanks to the 2014 Winter Olympics in Sochi . A building boom set in in and around Sochi . Around twelve billion US dollars were spent on the construction of the buildings required for the games alone. In addition, there were investments in the infrastructure.

The south of Russia has been shaped for centuries by the culture of the free farmers living there, the Cossacks. From the 16th to the 18th century, the region was an almost dominant border zone, which the Don Cossacks settled, guarded and defended against attacks by Tatars . The culture of the Don Cossacks is still cultivated by their descendants today and can be explored in the individual cities of the region, especially on the Don . Southern Russia combines a warm climate, interesting landscapes, a rich cultural history since antiquity and a high natural spatial potential for adventure and sporty travelers.

The most important vacation spots in terms of the annual number of overnight stays are: Sochi , the ski resort Dombai , Anapa and Gelendzhik . But many other places in southern Russia also have high tourist potential. In addition, the cities and stanizen (Cossack settlements) of the Russian Cossack region Kuban offer further tourist destinations. The largest city of the Kuban and at the same time the informal capital of the Cuban Cossack era is Krasnodar .

On Mamayev Hill in Volgograd there is a large memorial dedicated to the Battle of Stalingrad in World War II , which attracts hundreds of thousands of visitors every year. The vast Volga Delta , which flows into the Caspian Sea , offers nature lovers a great variety of fauna and flora. The coast of the Caspian Sea is best known for its fish diversity and abundance of birds, which especially attract anglers and ornithologists.

The region is initially known for its seaside resorts on the Black Sea with 300 kilometers of beaches from the Taman Peninsula to Sochi. From May to October, most of Russia's summer tourism is concentrated along this stretch of coast. Dozens of coastal cities such as Adler , Khosta, Matsesta, Dagomys and Lazarewskoje receive millions of travelers from all over the world every year. The coastal region lies at the same latitude as the Adriatic Sea in Italy or the French Riviera and offers a comparable climate.

Travelers often combine holidays in the region with spa stays in the health resorts, which are located at the many mineral springs in the Pre-Caucasus. Krasnaya Polyana , 39 kilometers from Sochi, is the southern Russian center for alpine skiing and was the venue for the 2014 Winter Olympics .

The mountainous hinterland of the Black Sea - for example the Lago-Naki plateau with heights of up to 2200 meters in the Republic of Adygea - offers hikers, mountaineers and climbers favorable conditions. Modern and large-scale tourism infrastructures have emerged there in recent years.