The Volgograd Oblast ( Russian Волгоградская область / Wolgogradskaja oblast ) is an oblast in southern Russia . In the north, the Oblast is bordered by the Saratov Oblast , in the east by Kazakhstan , in the southeast by the Astrakhan Oblast and the Republic of Kalmykia , in the south and west by the Rostov Oblast and in the northwest on the Voronezh Oblast .

Steppe landscape near the Don River in Volgograd Oblast

The oblast lies in the southeast of the Eastern European Plain and borders Kazakhstan in the east . The Volga , Europe's longest river, and the Don flow through the area. The Volga divides the area into two parts: the eastern half is dominated by flat lowlands, the western part is characterized by a hilly relief, the Volga plate (up to 358 m high). The natural area is characterized by the transition from the forest steppe in the northwest to the semi-desert in the east. Only 4.3 percent of the territory consists of forest. There are about 200 rivers in the area that feed the Azov and Caspian Seas . These provide the habitat for a species-rich flora and fauna. There are over 9000 species of insects, 80 species of fish, 8 amphibians, 15 reptiles, 300 species of birds and 80 species of mammals in the region. There are seven nature parks in the Volgograd Oblast.

The Volgograd Oblast has black earth in the northwest and brown earth in the rest of the area . There is a continental climate with cold winters and little snow and hot dry summers. The average temperature in Volgograd is 7.5 degrees Celsius, in February -9.9 degrees and in July 24.2 degrees. The growing season is 181 days long. The long-term average rainfall is 450 mm per year in the northwest, 270 mm in the southeast, and 373 mm in Volgograd.

The Volgograd Oblast is one of the most economically developed regions of Russia with a balanced economic structure, which is combined by diversified agriculture and a variety of other industrial sectors.

Volgograd Oblast also has high natural resource potential. The area is rich in petroleum, so petrochemicals are also located here . There are also numerous other raw materials for the chemical industry, including for the production of fertilizers ( potassium , magnesium , sodium , phosphates ), material for the construction industry ( limestone , sandstone ), molding sand for the iron and steel industry, iron ore, non-ferrous and rare metals, e.g. B. titanium and zirconium .

In economic terms, metal processing and mechanical engineering (22 percent of Russian tractor production), oil refineries and the chemical industry dominate the industrial sector, which leads to severe environmental pollution, especially in the greater Volgograd area. The light industry (including shoes, furs, leather goods) is made up of 207 companies in the oblast. The textile industry is concentrated in Kamyshin .

Agriculture is characterized by the cultivation of cereals (all types), vegetables (especially potatoes) and oil crops. 61 percent of the cultivated agricultural area is cultivated with grain, 29 percent with fodder plants and 9 percent with sunflowers and mustard . In animal production, milk and cattle production predominate.

The Volga and Don form important waterways. Both rivers are connected by the Volga-Don Canal .

The area around Volgograd was already an important trade route in ancient times due to its geographical location on the isthmus between the Volga and Don . Here settled in the 5th century BC. BC Scythians . In the 8th and 9th centuries the area belonged to the Khazar empire , in the 11th and 12th centuries various tribes stayed here, including the Polovci . With the Mongol storm in the 13th century, it came under the rule of the Golden Horde , who built one of their centers with the city about 50 km east of Volgograd, on the Akhtuba River . In the 14th century, the area came under the rule of the Nogaier Horde . At the end of the 16th century, the area came under the Russian tsarism after it was crushed in a two-front war against Cossacks and Kalmyks. Between 1708 and February 3, 1781 it belonged to the Kazan Governorate . Then it came to Saratov. For a short time, 1781/1782, this was called Lieutenancy Saratov , then Saratow Governorate . The region remained part of this governorate until March 29, 1919. In 1919 the Tsaritsyn Governorate was formed, which existed until 1925. The region was fiercely fought over during the civil war . In honor of Stalin , the governorate was renamed Stalingrad governorate in 1925 . On May 21, 1928 it became part of the new Lower Volga Oblast . It was renamed Lower Volga Krai in June 1928 . In 1932 its capital was moved from Saratov to Stalingrad. On January 10, 1934, the Stalingrad Krai was formed and on December 5, 1936, the Stalingrad Oblast . The area was the scene of the Battle of Stalingrad during World War II in 1942/43 .

During the de-Stalinization era , Stalingrad Oblast was renamed Volgograd Oblast on December 10, 1961. 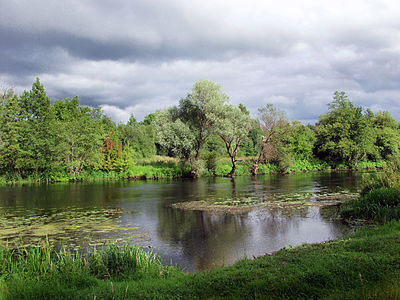 Landscape in the Volgograd Oblast

Note: the proportions refer to the total number of inhabitants. Including the group of people who did not provide any information about their ethnicity (2002 8,733 and 2010 44,541 people)

The Volgograd Oblast is divided into 33 Rajons and 6 urban districts . In addition to the Volgograd Oblast Administrative Center, there are two other large cities , Volzhsky and Kamyshin . There are a total of 19 cities and 18 urban-type settlements in the Oblast .