The Altai region ( Russian Алтайский край Altaiski krai ) - not to be confused with the smaller, autonomous Altai Republic in the southeast - is an administrative region ( krai ) in Russia .

The region is located in southern Siberia on the upper reaches of the Ob . It borders on Kazakhstan in the south and the Altai Republic in the southeast . It encompasses the western foothills of the Altai Mountains and extends to the west into the West Siberian lowlands .

The history of Russian settlement in the region began in the second half of the 17th century. The Russians make up the vast majority of the population today. The German National Circle of Halbstadt was founded in 1991 in the Kulunda steppe, near the border with Kazakhstan, to offer the predominantly German population there an alternative to emigrating to Germany. Today, however, most of the Russian Germans, whose ancestors had founded several German settlements here around 1900 or were forcibly resettled from the Volga regions during the Second World War , emigrated from the National District to Germany. They were only partially replaced by resettlers of German origin, most of whom no longer speak German, from other regions of the former Soviet Union.

There are numerous mineral resources such as lead, iron ore and manganese in the region. Important branches of industry are metal processing, the chemical and the food industry. Attempts are being made to give tourism in the region a higher priority.

The Altai region is divided into 60 Rajons and 12 cities or urban-type settlements directly subordinate to the regional administration .

The administrative center is Barnaul , other large cities are Bijsk and Rubzowsk . The historical mining center of Smeinogorsk and the spa town of Belokuricha are also well-known nationwide . There are a total of twelve cities and six urban-type settlements in the region . 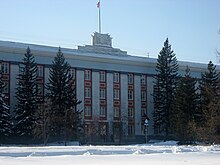