The Sakhalin Oblast ( Russian Сахалинская область / Sakhalinskaja oblast ) comprises the island of Sakhalin and the Kuril Islands, some of which are claimed by Japan . Sakhalin is an oblast in the Far East Federal District of Russia .

Volcanic crater on the Kuril Islands

Sakhalin Island is very mountainous. The extension from north to south is 948 km. The Kuril Islands extend over a length of 1,200 km. There are numerous volcanoes.

The climate is very harsh. Monthly highs of over 20 ° are reached in July and August. But from November to April they are between −7 ° and + 4 °. The monthly average temperatures at night from October to May are −18.4 ° to + 0.3 °. The climate is characterized by cold winters and humid summers. The weather is most pleasant in the south-east and the wildest in the north-west. The number of sunny days increases from north to south, the number of bad weather days decreases from west to east. 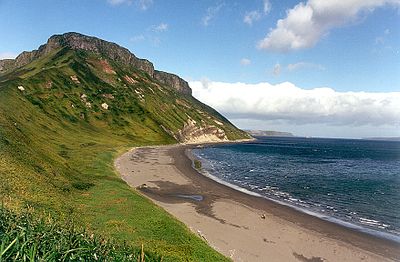 Coastline of a Kuril island

Note: the proportions refer to the total number of inhabitants. Including the group of people who did not provide any information about their ethnic affiliation (2002 3,387 and 2010 24,035 people)

The area's population is roughly 85% Russian. The Koreans (highest proportion in all of Russia) and Ukrainians are the most important ethnic minorities in Sakhalin Oblast. The number of Koreans - like the number of many other ethnic groups - is falling sharply, however. In contrast, the number of Niwchen, Kyrgyz, Uzbeks, Armenians and Azerbaijanis is increasing. Several thousand people have immigrated from the North Caucasus, Transcaucasus and Central Asia since the end of the Soviet Union, albeit in far fewer numbers than in other regions of Russia. 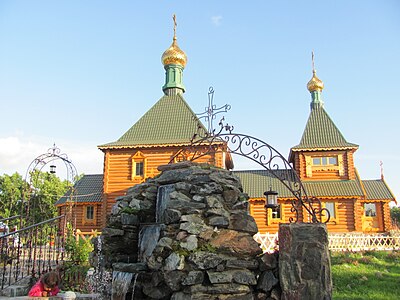 The Saint Nicholas Church in Yuzhno-Sakhalinsk

The natives of Sakhalin are the Niwchen , Nanai , Oroken (also called Ulta, Ulten or Uilta), Ultschen , Orotschen and Evenks . They are traditionally fishermen and reindeer herders . The Ainu who lived here until 1945 were deported to Japan. It is not known whether Ainus will be among the 219 Japanese in 2010. The locals now make up only a fraction of the population of Sakhalin Oblast and some of them are heavily Russified. Here is an overview:

The islands, which were annexed by Russia in the 19th century, were long disputed between Russia and Japan. At the end of the 19th century there were a number of labor camps on Sakhalin. It was not until 1945 that the Soviet Union conquered South Sakhalin ( Karafuto ) and the Kuril Islands from Japan and in 1947 formed the oblast in its present form, which has been limited to the northern part of Sakhalin since 1932 as part of the Far Eastern Region ( Krai ) or the Khabarovsk region .

The capital and only major city of the Oblast is Yuzhno-Sakhalinsk .

Other important industries are fishing and the timber industry.

From August 2007 to March 2015, the governor of the oblast was the former mayor of the city of Okha Alexander Khoroshavin, who replaced the resigned Ivan Malachov. After Khoroshavin was arrested in March 2015 and investigations into corruption were initiated, he was replaced by the previous governor of Amur Oblast, Oleg Koschemjako .

The oblast can be reached by ship from mainland Russia. There has also been a ferry connection to Japan since 1999. Sakhalin also maintains flight connections to Russia, Japan, South Korea and China. Since the Tatarensund between Sakhalin and the mainland is only seven kilometers wide at its narrowest point, there are plans for a fixed connection through a tunnel or bridge. So far, however, no start of construction is known.

There are three different modes of transportation on Sakhalin Island: by bus (regular bus service) or by car, by ship or by train. The Sakhalin Children's Railway runs on a 2 km long narrow-gauge line in Yuzhno-Sakhalinsk .