The Saratov Oblast ( Russian Саратовская область / Transkription Saratowskaja oblast ) is an oblast of the Russian Federation with almost 2,600,000 inhabitants and an area of ​​over 100,000 km². The oblast is located in the southeastern part of European Russia, on the border with Kazakhstan . The capital is Saratov .

Until its dissolution in 1941, most of the Volga German Republic was in the area of ​​today's oblast . There are important bases of the Russian armed forces in the area .

The oblast is located in the southeast of the Eastern European level in the European part of Russia . The oblast lies on both sides of the lower reaches of the Volga . The western part is characterized by the ridge of the Volga plateau with heights of up to 370 m above sea level. In the eastern part, the steppe level determines the appearance. The flat plain is only interrupted by dry depressions and valleys. In the east the foothills of the Obschtschi Syrt limit the plain, in the south the land descends to the Caspian Depression . The oblast lies on Russia's southeastern European border and borders Kazakhstan in the east . The oblast covers an area of ​​101,240 km². The extension is 575 kilometers in an east-west direction and 330 kilometers in a north-south direction. Saratov is located in the Samara time zone (Samara Time, VELVET). The time difference to Germany is therefore +3 hours (UTC + 4).

The mouth of the Tereschka in the Volga

The Saratov Oblast is located in the cool, temperate climate zone with a continental climate . The average temperature in January is −12 ° C and in June +22 ° C. The average annual rainfall fluctuates between 250 mm in the southeastern steppe area and 450 mm in the northwestern hill country of the Volga plateau.

Long, dry summers are typical of the region, with the temperature often rising above 30 ° C on the eastern bank of the Volga. The winters, however, are rather cold with an average of 12–15 days of precipitation, 4–10 days of fog and 4–10 days of snowstorms per month. Spring is usually very short and lasts on average from late March to mid / late April. In March, snow drifts are possible on an average of 5–7 days and fog on 5–9 days. When the thaw sets in, a driving ban for heavy traffic is usually issued on paved roads. The beginning of autumn and the duration differ greatly from year to year. A solid snow cover forms in the northern Rajons around November 25th, in the central and southern Rajons between November 29th and December 8th.

The most important body of water in the Saratov Oblast is the Volga , which flows through the Oblast centrally from north to south. The river is used here not only as an important waterway and transport route, but also for energy generation. Two reservoirs of the Volga-Kama cascade extend in the area of ​​the oblast . In the northern part of the oblast, the Saratov reservoir extends over a length of 230 km from Samara to Balakowo, where it feeds the Saratov hydropower plant . In the southern part of the city of Saratov, the Volgograd reservoir extends over a length of 400 km , which feeds the Volgograd hydropower plant near Wolschski in the Volgograd Oblast . The only section of the Volga that is still in its original, natural state lies between the two reservoirs. Tributaries of the Volga in the area of ​​the oblast are the Great Karaman , Great and Little Irgis , Jeruslan and Tereschka .

The extreme west of the oblast is shaped by the Chopjor , a tributary of the Don . The river comes from Penza Oblast in the north and flows through the Rtishchev , Arkadak and Balashov Rajons in Saratov Oblast , before continuing to Voronezh Oblast . Tributaries of the Chopjor in the Saratov Oblast are the Medveditsa , Balanda and Artscheda .

The oblast is divided into hill, forest steppe , steppe and semi-desert zones . The vegetation consists mainly of various sweet grasses . About five percent of the oblast is overgrown with trees. The tree population consists of elms , oaks , birches and linden trees and grows mainly in the northeast of the oblast and on the rivers. The Wolsk Rajon with its location between the Volga and the Volga plateau has the densest tree population .

On rodents there are ground squirrels , voles , gerbils and similar animals. There are also populations of brown hares , foxes , wolves , weasels and many other animals. Moose are native to the forests and saigas to the steppe . Various species of fish such as catfish , volga zander , bream and perch can be found in the rivers . The Chwalynsk National Park is located in the Oblast . 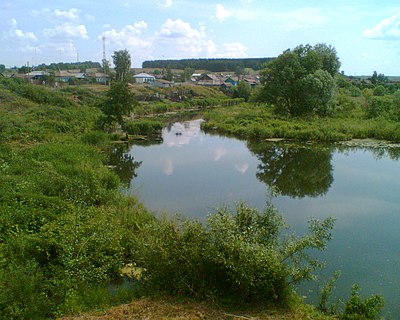 Note: the proportions refer to the total number of inhabitants. Including the group of people who did not provide any information about their ethnic affiliation (2002 13,420 and 2010 64,878 people)

The area's population is over 85% Russian. But the Kazakhs, Tatars, Ukrainians, Chuvashes, Mordvins, Volga Germans and Jews are also among the ethnic groups that have settled in the oblast since the times of the Tsar. These nationalities are the most significant ethnic minorities in Saratov Oblast. The number of Ukrainians - as well as the number of Chuvashes, Mordvins, Belarusians, Russian Germans and Jews - is falling sharply, however. Tens of thousands of people have immigrated from the North Caucasus, Transcaucasus and Central Asia since the end of the Second World War. The number of Kazakhs rose from 43,987 in 1959 to 76,007 today. The number of Armenians and Azerbaijanis in the same period of 1,046 resp. 602 to 23,841 resp. 14,868. In addition to the nationalities listed above, thousands of Chechens, Lesgians, Uzbeks, Kurds, Tajiks and Georgians also moved to the oblast. Thousands of Koreans also immigrated from the Far East and the Central Asian deportation areas (1979: 485; 2010: 4,206 people). 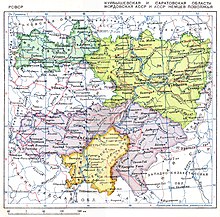 Russian settlement began in the 16th century with the construction of the Saratov fortress. The trade routes along the Volga have always been of great importance to the city.

The administrative predecessor of today's Saratov Oblast was the Saratov Governorate from around 1780 to May 21, 1928 . After the area had meanwhile belonged to the Lower Volga Oblast (until June 11, 1928), the Lower Volga Region (until January 10, 1934) and finally the Saratov Region , today's oblast was created by renaming the region on December 5, 1936.

On February 4, 1939, parts of the area were given to the newly founded Penza Oblast . Another part was spun off from January 6, 1954 to November 19, 1957 in an independent Oblast Balaschow .

On March 3, 2005, Pawel Ipatow was appointed governor of Saratov Oblast. He previously headed the Balakovo Nuclear Power Plant and was appointed on the proposal of the President of the Russian Federation, Vladimir Putin . Ipatov was inducted into office on April 3, 2005.

Former Saratov Oblast Governors and their predecessors were:

Chairman of the Duma of Saratov Oblast is since April 12, 2005 Pavel Vladimirovich Bolschedanow (Большеданов, Павел Владимирович) of the United Russia party .

The representative of Saratov Oblast in the Federation Council has been Sergei Alexevich Shuvalov (Шувалов, Сергей Алексеевич) since April 5, 2005 .

There are a total of 18 cities and 25 urban-type settlements in Saratov Oblast . Besides Saratov there are two other big cities : Balakowo and Engels . Other larger cities are Balashov and Wolsk .

Saratov, in the foreground the St. Alexius Monastery

Oil and gas production, aircraft construction, the chemical industry and food processing are economically important. The Saratov economic region also has extensive agriculture. Due to the Russian-German history, numerous German-Russian joint ventures are active in the region.

According to the population distribution, one focus of the transport network is centrally located in the Oblast around the city of Saratov . In this area, traffic flows ( railways and highways ) from the connections Volgograd - Samara and from the Voronezh Oblast to Kazakhstan intersect .

There are 9,940 kilometers of roads in the oblast, 9,530 kilometers of which are paved. This includes 741 kilometers of the Russian trunk road network. The Russian trunk road R298 leads from Saratow via Balaschow to Borisoglebsk and crosses the R22 there . The European route 38 (from Hluchiw , Ukraine to Qysylorda , Kazakhstan) also runs on the route of the R298 and crosses both the Oblast and the city of Saratov centrally in an east-west direction. The European route comes from the Voronezh Oblast to the Saratov Oblast southwest of Balaschow . The road leads from Balaschow via Kalininsk , Saratow, Engels , Pushkin , Jerschow to Osinki . The road crosses the border into Kazakhstan east of the city of Osinki.

There are three options for road traffic to cross the Volga within Saratov Oblast. In the city of Saratov, the 2,800 m bridge of Saratov, opened in 1965, and the new bridge (opened in 2005) about 15 kilometers north of the city. In addition, at Balakowo there is the possibility to cross the Volga via the dam of the Saratower reservoir.

The railway company Privolschskaja schelesnaja doroga ( Volga Railway ) is based in Saratov . The company is one of the regional administrations of the state railway company Rossijskije schelesnyje dorogi . Direct long-distance connections to Berlin , Prague , Sofia and Varna start from Saratov Central Station . Domestic connections lead to Moscow , Volgograd and Samara , among others .

In the oblast there are two ways for rail transport to cross the Volga. A few kilometers south of Saratov, at the level of the Privolschski settlement , there is a railway bridge. The Saratov railway bridge was opened as the first Volga crossing in 1935. Another crossing of the Volga is possible at Balakowo via the dam of the Saratow hydroelectric power station .

East of the city of Osinki in the Osinsk district is a border crossing for railways to Kazakhstan. The length of the railroad tracks in Saratov Oblast is 2,326 kilometers.

The most important airport in Saratov Oblast is Saratov Airport . From here the resident airline Saravia flies to national ( Moscow-Domodedovo and Surgut ) as well as international ( Yerevan and Khujand ) destinations. There is also the Balakowo Airport and several smaller airfields.

There were also several former military airfields, some of which were already abandoned during the Soviet Union :

Several missile silos of the strategic missile troops were already in the area of ​​the Saratov Oblast in Soviet times . In November 1997, the Defense Minister of the Russian Federation, Igor Dmitrijewitsch Sergejew announced that the first Topol-M (SS-27) ICBMs would be ready for action in December. The location of the first of these state-of-the-art rockets was the rocket silos of the Taman Division near the urban-type settlement of Tatishchevo ( Tatishchev district ). In July 1998, two more Topol-M missiles were delivered to the Tatishchev missile division. This was followed by the stationing of a second regiment with 10 more Topol-M missiles in 1999, a third regiment with 10 more missiles in 2000 and the stationing of a fourth regiment in 2003/04. As far as is known, a total of 40 missile silos equipped with Topol-M belong to the Tatishchevo missile division.