The Astrakhan oblast ( Russian Астраханская область Astrachanskaja oblast ) is an oblast in Russia with around one million inhabitants. The region on the Caspian Sea forms the eastern edge of the Federal District of Southern Russia of the Russian Federation .

The oblast lies in the Caspian Depression and occupies a narrow strip on the lower reaches of the Volga . South of the city of Astrakhan is the Volga Delta, the largest river delta in Europe, in which the Volga flows into the Caspian Sea. The oblast borders Kalmykia to the west, Volgograd Oblast to the north and Kazakhstan to the east . Despite the proximity to the Caspian Sea, the climate is strictly continental with little rainfall.

In addition to the Russians , the autochthonous population also includes the Kazakhs , Tatars , Nogai Tatars ( Nogai ) and Kalmyks . Other, smaller minorities in the region are Azerbaijanis , Armenians , Chechens and Ukrainians . About 25% of the population are Muslim. The oblast is sparsely populated; without the capital, the population density is less than 10 inhabitants per square kilometer.

Fishing is traditionally economically important, until a few years ago mainly for caviar in the Volga. More recently, oil and gas fields have been discovered that are being exploited.

Astrakhan Oblast is divided into eleven Rajons and two urban districts . A total of 11 urban and 153 rural communities are subordinate to the Rajons (status: 2010).

Astrakhan is the administrative center and only major city of the oblast . There are a total of six cities (including one “closed” ) and seven urban-type settlements in the oblast .

Bank of the Kutum, Volga River, in Astrakhan

The majority of the population in the area is now Russian. The Kazakhs and Tatars are the numerically strongest ethnic minorities in Astrakhan Oblast. Other indigenous peoples such as the Nogai and the Kalmyks make up only a small proportion of the total population. Since 1989 the population of Russians and Tatars has declined, while the proportion of Kazakhs has increased, as has the number of recently immigrated populations.

The proportion of Kazakhs in Astrakhan Oblast is the highest in any Russian region. In some districts near the border, this number is still well above the average of the oblast, for example in Volodarsk Raion (68.05% of the Kazakh population), in Krasny Yar (47.65%), in Kharabali (41.84%) and in Kamysjak (31.05%). Kazakh can be learned in many schools and there are numerous Kazakh associations and cultural centers. There is a Kazakh consulate in Astrakhan, and Ak Arna, a bilingual (Kazakh-Russian) newspaper, has been published in the oblast since 1991 . Since 2007, Kazakh language and literature can be studied at the Astrakhan State University . The Tatars also live mainly in some regions, especially in Priwolschski Rajon, where their population share is above average at 31.05%, and in Narimanow Raion (20.16%). The presence of the Kazakhs and Nogais in the region can be traced back to the Astrakhan Khanate .

The population growth of the region is mainly caused by an increase in the number of inhabitants in the city of Astrakhan itself.

The most famous sight of the capital Astrakhan is probably the Astrakhan Kremlin , with which the city has been trying to be included in the UNESCO World Heritage since 2009 . In Astrakhan, historical buildings from various epochs have been preserved to a large extent.

The Ulyanov Family Museum in Astrakhan 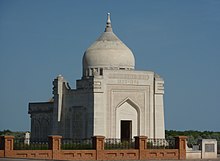 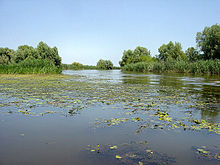 In the Volga Delta

There are several nature reserves in the area of ​​Astrakhan Oblast, including the Astrakhan Nature Reserve. It is primarily ornithologically interesting because of the massive migration of migratory birds in spring and winter; however, there is currently no ringing of migratory birds. Russian and German travel companies offer excursions to the nature reserve. Another big reserve is the Bogdo Baskunchak Nature Reserve to the Salt Lake Baskunchak .

Sand dunes in the steppe near Astrakhan

Large parts of the Astrakhan region are steppe landscape, in contrast to this is the Volga delta in the southern part . Several uninhabited islands in the Caspian Sea belong to the oblast, including Blinow and Batkatschny .

Species such as bee-eater , hoopoe and various limikoles can be seen in Astrakhan Oblast . The oblast is rich in various amphibians, but also reptiles such as turtles and snakes, due to the natural spatial diversity of the steppe, the floodplain regions of the Volga and Akhtuba as well as the Caspian Sea.

Igor Babushkin has been the governor of the oblast since September 2019 (as of June 2020). Alexander Schilkin was in office before him .

In the Astrakhan Oblast Duma, which has 56 members, the United Russia party has the largest number of 33 members. The second largest group is Fair Russia / Pensioners / Life with 7 MPs, followed by the Communists with 6 and the Astrakhan and Astrakhan Region groups with 4 MPs each.