The title of this article is ambiguous. Further meanings are listed under Astrakhan (disambiguation) .

Astrakhan ( Russian Астрахань ; pronunciation ? / I ) is a city on the Volga in Russia with 520,339 inhabitants (as of October 14, 2010). The old city names Etil and İtil are known; both names also refer to the Volga. The headquarters of the Caspian Flotilla of the Russian Navy is located in the city .

Since the 6th century, Astrakhan has been an important trading post between Europe and the Caspian Sea . This is also evidenced by the name “Astrakhan” for the curly fur of the lamb of the Karakul sheep (also “ Persian ”), which was mainly traded through this place. Settled by Volga Tatars since the 13th century (with the name Ashtarchan ), Astrakhan was for a long time the seat of a Tatar khanate , the Astrakhan Khanate . From 1554 it was Russian. In 1556, Tsar Ivan the Terrible besieged the city and burned it down completely. 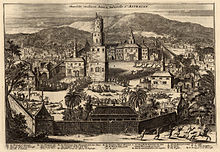 After the conquest by the Moscow state , the city was rebuilt in 1558 as a wooden fortress at its current location on a hill 12 km downstream, surrounded by arms of the Volga. A Tatar-Ottoman attack on the city in 1569 failed. In 1582 the place received a citadel with a stone wall with eight towers and a caravanserai . Free settlements (a so-called Sloboda settlement ) of the Astrakhan Tatars, Armenians and Russians formed around the Kremlin . The fortress, located on the periphery of the Russian Empire, was exposed to the attacks of the Cossacks settling on the Don, Terek and Volga rivers , the original regional population and neighboring empires of the former Golden Horde such as the Crimean Khanate . They defended themselves against the rule emanating from the Astrakhan Kremlin or viewed this and the Russian settlement as foreign rule and a threat (uprising of 1605/06, conquest of the city by the Don Cossacks under Stepan Razin in 1670/71 ).

During the 17th century, Astrakhan gained increasing importance as a transit point for the international raw silk trade. The route from Persia over the Caspian Sea up the Volga to the Baltic Sea and to Northern and Western Europe (Holland, England) was economically interesting, but it was and remained only a side route that never changed the importance of the land trade route through the Ottoman Empire Reached the Mediterranean. In intra-Russian trade with Nizhny Novgorod and Moscow , salt and fish remained the most important goods. Since 1717 Astrakhan was the capital of the Astrakhan governorate , and since 1787 part of a Caucasian governorship.

From 1722, Tsar Peter I had an admiralty, a shipyard and a port built and a fleet built up (cf. Caspian Flotilla ).

Fishing ( sturgeon , caviar ) became the most important branch of the economy; the viticulture fell short of the high expectations.

In the 19th century, Astrakhan's economic importance declined. In the fall of 1823 there were cases of epidemic cholera in Astrakhan. It was the first time that this was observed on European soil. In 1829 cholera broke out again; shortly afterwards she also appeared in Moscow. At the end of the 19th century, oil production in Baku led to a new boom. In the Russian Civil War from 1918 to 1920 , the city was fought over between White Guards and the Red Army . In the early Soviet Union, the city was administratively subordinate to the neighboring city of Volgograd to the north, but in 1943 it was elevated to an area capital.

As part of Operation Blau and the offensive on Stalingrad , the German Air Force carried out several bombing raids on Astrakhan and its oil refineries in the summer of 1942. On September 16, 1942, a long-distance spying group of Army Group A approached Astrakhan to a distance of 35 km southwest of today's city of Narimanow , which was probably the most easterly point reached by the German Wehrmacht during the war .

In the city there was a POW camp 204 for German prisoners of war of the Second World War . Seriously ill people were cared for in the two prisoner-of-war hospitals 5613 and 5761 .

The following overview shows the development of the population of Astrakhan.

Astrakhan has a continental steppe climate , consisting of warm to hot summers and cold winters. The extreme temperatures are 41.0 ° C and -33.6 ° C.

In Astrakhan, historical buildings from various epochs are preserved to a large extent. The styles range from Renaissance to Classicism to (neo) Moorish as well as especially Russian and Orthodox influences. Well-known sights are the Astrakhan Kremlin along with the Dormition and Trinity Cathedral, the English Court, the merchants' houses (including the stock exchange building and the city administration complex), the numerous churches (including the Ioann Slatoust Church, the Pokrovsky Church, etc.), the picture gallery (extensive collection of Russian art), the local history museum, the Khlebnikov museum, the museum of the Second World War.

There are six mosques in Astrakhan: The White Mosque , also known as the Tatar Mosque, is the oldest mosque in Astrakhan. As early as 1777 Gmelin reported about a white mosque that was still wooden at the time. It was the most important Tatar mosque in the city. In 1810 a stone building was built. Until the revolution there was a school belonging to the mosque. In 1930 the White Mosque was closed and later used as a kindergarten. It was not until 1992 that the mosque was returned to the faithful. In 1997 the first “madrasah” was established in Astrakhan Oblast, and the mosque was renovated in 2000–2008.

The Black Mosque was the mosque of the Bukhara merchants in Astrakhan. The stone building was erected in 1816, the mosque was closed in 1930, given to a school and later destroyed. 2005–2008 the mosque was rebuilt.

The Red or Kazan Mosque was built at the end of the 19th century with private funds from the Tatar mullah Abdrachman Abdul Wagap Aliyev; However, since he himself had too little money, he was dependent on the support of the Tatar trader Shakir Kazakow. The mosque was completed in 1898 - the name "Kazan Mosque" has nothing to do with the city of Kazan, but means that the mosque is just as beautiful as the Kazan mosques. During the Soviet period, the mosque was one of only two open mosques in Astrakhan. In 1941 it was closed and its building was used by a craft workshop, but in 1950 it was returned to the faithful. Today it is the residence of the Mufti of Astrakhan.

The Kruischiner Mosque was built at the beginning of the 20th century according to oral evidence around 1907-1909. In 1932 it was closed by the Soviet authorities and used as a storage room. In 1990 it was almost completely destroyed. After the mosque was returned to the faithful in 1997, the Azerbaijani diaspora began the reconstruction of the mosque in 2004. Since it is a Shiite mosque, administered by the Azerbaijani diaspora and is also located on Baku Street, it is also called the Baku Mosque .

The Persian Mosque was built by the Persian community in Astrakhan in 1860. It was led by a special council and could only be entered by the curious with special permission. In 1939 the mosque was closed and turned into a sewing factory. The building was severely affected by renovations, the four minaret towers on the sides are still missing.

The Caucasian Mosque , located in the popular Bolshiye Issady municipal market , was built in 1894 or 1900. The mullah of the mosque was the Tatar Feisulla Fetchullin in the first third of the 20th century. In 1935 the mosque was closed and given to a hygiene awareness center. In 1990 the mosque was returned to the community, and from 1993 to 2000 it was reconstructed. The mosque is mainly visited by Caucasians - Avars, Darginers, Laken, Lesginern, Sunni Azerbaijanis, but also Tatars, Nogais and Kazakhs - hence its name. The community of believers consists of around 300 to 500 people, and on public holidays up to 1,500 believers visit the mosque.

The Catholic Church in Astrakhan

Paul Fleming wrote poems about Astrakhan as a member of the Holstein Expedition. Astrakhan is also mentioned in an episode of Grimmelshausen's Simplicissimus . Astrakhan as a literary place in Russian literature is mainly shaped by the most important native Astrakhan writer, Velimir Chlebnikow , but Konstantin Paustowski also wrote from and about Astrakhan. The historian, religious and local historian Alexander Markow chooses Astrakhan as the setting for his historical novels, such as Tainy sowetnik (The Privy Councilor).

Narimanovo Airport (IATA: ASF ) is an international airport in Astrakhan. It is operated by the company OAO Aeroport Astrakhan . After its renovation, the new construction of the international sector, which was opened in February 2011, and further work to be carried out in 2011, it is one of the most modern regional airports in Russia. There are direct flights from Astrakhan to Aktau , Baku , Yerevan and Moscow . In addition, the regional airline Ak Bars Aero opened new connections to and from Kazan, Istanbul and St. Petersburg . In summer there are also flights to Sochi on the Black Sea.

Astrakhan was opened in 1907 with a branch line of the Ryazan-Ural Railway (Рязано-Уральская железная дорога) from Verkhny Baskuntschak . The main station was originally designed as a dead end station. In order to ensure the supply of the Eastern Caucasus, the line to Kisljar was extended in autumn 1942 to connect to the North Caucasian Railway . There are 4 daily connections to Moscow and at least once a day to all major cities in Russia, including direct to Murmansk. The tracks belong to the Volga Railway (Приво́лжская желе́зная доро́га). In addition to the long-distance routes, 4 suburban lines, called Elektritschka , are operated.

Astrakhan is the terminus of the R22 Kaspi ( Moscow - Volgograd - Astrakhan), R216 ( Cherkessk - Stavropol - Svetlograd - Astrakhan) and A340 (to Kazakhstan) highways . R22 and A340 are part of the European west-east corridor E40 from Calais to Ridder on the Chinese border in Kazakhstan. The R22 is also part of the E119 from Moscow to Baku . However, there is currently no connection between Astrakhan and Makhachkala . A north bypass is currently being built to connect the M6 ​​and A340 in order to bring through traffic to and from Kazakhstan from the city center.

Four suburban lines ( Elektritschka ) are operated with a length of almost 150 km.

Trains of the type ED9T are used.

Astrakhan has had a trolleybus network since November 5th, 1967 with four lines (1, 1A, 2, 3) shown in the 2012 timetable. Line 4 was canceled in 2011 as it largely corresponds to line 2. The two additional stations to the Zwestnij Stadium were dismantled. Line 1A is an extension of Line 1 to the airport and is only operated in the summer months. Line 3 (Soljanka Airport) is only manned when required. There are currently (2012) 24 buses available, 20 of which are in daily use.

There are currently (2012) 22 bus routes in operation, two of which are metro buses and two that have been awarded to private companies. In addition, 79 lines for small collective buses ( marshrutka ) are licensed.

The football club FK Volgar Astrachan competes in the third-class Perwenstwo PFL and plays its home games in the central stadium . From 1931 to 2016 there was another football club, FK Astrakhan . FK Astrakhan used to be the shipyard's club and accordingly called itself Sudostroitel , shipyard worker. He played his home games in the municipal stadium in the south of the city in the Narimanowo district near the airport. The GK Astrachanotschka, a well-known women's handball club of the Russian league, is based in the city.

The new musical theater in Astrakhan

Astrakhan has one of the oldest theaters in Russia, as well as a theater that specializes in children's and youth culture and the "South Russian State Opera House of Astrakhan".

The former German member of the Bundestag, Wolf Bauer , was the first foreigner since 1917 to be awarded honorary citizenship in 2001 for his long-term commitment to international understanding.