Elektritschka ( Russian электри́чка ) is the Russian (colloquial) name for electric multiple units of the railroad , which are used as suburban trains. It is common in most of the successor states of the Soviet Union .

The term is the slang term for "электропоезд пригородного сообщения" ("Electric multiple unit for suburban traffic"). Since the official name is too long and too inconvenient in everyday use, the name "Elektritschka", which is used today, quickly developed. For example, the Russian-language arrival and departure schedules for suburban trains use this name officially. However, people with little connection to the railroad, sometimes also from (Russian-speaking) mass media, use the term incorrectly for non-electric suburban traffic, or for electrically operated trains (also with locomotives) in general, i.e. H. not only used in suburban traffic. 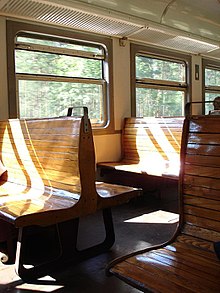 Historically, the name of the trains is explained by the fact that the Soviet state railway initially electrified almost only island networks around the big cities and only then did longer long-distance routes and the linking of these island networks. Even today, the electrical suburban networks of some cities in the successor states of the Soviet Union are not connected to the rest of the electrical network and are used exclusively for suburban traffic, for example in Kaliningrad , Vilnius , Riga or Tallinn . Long-distance passenger and freight traffic in these networks is served with diesel locomotives even if there is an overhead line.

Elektritschkas can in principle be compared with Western European suburban traffic and S-Bahn traffic, but sometimes extend much further into the outskirts of the cities, some Moscow suburban routes extend up to around 200 km into the surrounding area. They are served by electric railcars , rarely have their own pairs of tracks and therefore have to share the route with long-distance and freight traffic. That is why they do not have a regular schedule . Almost all of the railcars came from the Riga wagon factory , which produced these vehicles for the whole country during the Soviet era. A characteristic of these electric kas was the generally low level of comfort. Many trains were equipped with wooden benches. There are no car class differences in these Elektritschkas. Since the financial means were often lacking after the dissolution of the Soviet Union , many railcars were outdated and in some cases in poor condition.

In Russia and the Ukraine, however, more modern successor vehicles have been developed since the 1990s and are increasingly used. In Russia, the mechanical engineering company Transmashholding, with the Demichowo machine factory (near Orechowo-Sujewo ) and the works near Torzhok, is currently the most important producer of electric local trains.

Elektritschkas operate at the local transport tariff, which is well below the long-distance tariff. However, there are also a small number of railcars that run over longer distances and at long-distance tariffs and therefore require a reservation. These are known in Russian as "elektropojesd powyschennowo comforta" (электропоезд повышенного комфорта). For this purpose specially equipped electric kas are used, the equipment of these trains is different depending on the train route. In the third car class, the seats correspond to the usual Elektritschkas, some with wooden benches. The second and first carriage classes (not both are offered on all such trains) have upholstered seats. Electric multiple units with increased comfort have their own train number range from 800 to 849 (occasionally trains run at local tariffs in this number range), while normal electric trains as suburban trains have four-digit train numbers. To improve comfort, the 1st and 2nd class of these trains must be reserved. Only in Georgia are Elektritschkas also in use as long-distance passenger trains with 600 train numbers. The corresponding deployment concept is also available for diesel multiple units, which are then usually referred to as electric multiple units with increased comfort regardless of the drive principle.