The Rostov oblast ( Russian Ростовская область / Rostovskaya oblast ) is an oblast in southern Russia . The capital of the oblast is Rostov-on-Don with 1.1 million inhabitants. The administration of the Federal District of Southern Russia is also located here .

In terms of natural space, the area is located in the south of the Eastern European Plain and in the Pre-Caucasus . Located on the lower reaches of the Don , the relief is flat to hilly.

The Don, which flows into the Taganrog Bay of the Sea of ​​Azov, and its right tributary Seversky Donets flow through the oblast . 2.8% of the area of ​​the oblast is forested and lakes cover only 0.4%. Part of the Zimlyansk Reservoir lies within the Rostov Oblast.

Due to the clashes with the Crimean Tatars , the area was devastated and deserted when fortified farmers, the Cossacks , settled here since the 16th century . The center of the Don Cossacks was their capital Cherkassk . The Cossacks had personal freedom, had no obligations and paid no government taxes. The Ottomans owned a fortress in the city of Azov . This strategically important object was conquered by Russians several times in the 17th century (including in 1696 under Peter the Great ); It finally fell to the Russian Empire in the 18th century , giving it permanent access to the Sea of ​​Azov.

In the 18th century the region became an official part of Russia. As irregular troops, the Cossacks formed a significant part of the Russian armed forces . Empress Catherine II pursued an active policy of population and colonization in the region. In 1760 a new fortress, today's Rostov-on-Don, was built. Later the fortress became an important economic and military center of the Don region, which was also called "the gateway to the Caucasus". In 1779 the Armenians were moved here from the Crimea.

Due to the settlement of the Don area, the local agriculture developed. At first, wheat, wine and tobacco were mainly grown. The Dont tobacco was of high quality and was also widespread abroad. The Don Cossack region was also known for its horse breeding, which had a long historical tradition in the region. The industry developed very slowly and focused on the refinement of agricultural products. Industrial development began at the beginning of the 20th century as a result of foreign capital investments. The Donbass , which is partly in the Ukraine, is very rich in mineral resources, including in particular lignite and hard coal. Up until 1917, three quarters of all Russian coal was mined here. In 1913 the share of today's Rostov Oblast in Russian steel production was 6.6%, and in Russian coal production 9.7%. The First World War , the Revolutions and the Russian Civil War were also waged in the Don area and ruined the region's economic development. More than 6600 Cossack farms were burned down within the boundaries of today's oblast. The mass arrests and expulsions of the Cossacks began in 1919. The Communist Party decided to destroy the Cossack way of life, it was forbidden to wear the Cossack uniform, and many Cossack settlements and farmhouses were renamed.

Since 1922 the restoration of industry and agriculture, which had been destroyed by the war, began. Large-scale industrial development began in the Donland in 1926. The Second World War severely affected Rostov Oblast, the city of Rostov-on-Don was badly destroyed. The pre-war population of the area of ​​2.95 million people was not reached again until 1954, the final reconstruction was not finished until the end of 1960.

The Rostov Oblast developed very differently from region to region. Large parts of the area, especially in the east, are still dominated by agriculture and sparsely populated. The cities of Shakhty , Novoshakhtinsk and Krasny Sulin in the northwest of the oblast, near the border with Ukraine, on the other hand, form the easternmost part of the Donbass , a densely populated industrial and mining area. Rostov itself is also an important industrial location. Taganrog and the surrounding area are not only important as an important port, but also as a tourist destination.

After the collapse of the Soviet Union , Rostov Oblast was overtaken in economic terms by the neighboring Krasnodar region .

The Don in Rostov Oblast 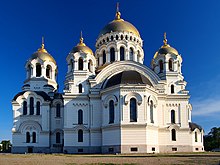 Around 89% of the population are ethnic Russians; the second largest group are the Armenians . The Armenian minority has a long tradition in the Rostov region. The larger village of Chaltyr and its surroundings are still mostly inhabited by Armenians, and the Rostov district of Nakhichevan on the Don has been a center of Armenian culture for centuries. Another part of the Armenians has immigrated from Armenia and other former Soviet republics since the collapse of the Soviet Union. The number of Armenians in Rostov Oblast has almost doubled since 1989.

Historically, there was a significant Ukrainian minority in Rostov Oblast, which today is only a few percentage points as a result of long assimilation. In the Taganrog district, the westernmost part of the oblast, over 60% of the population described themselves as Ukrainians in 1926, around 34% in the district around the city of Rostov itself and just under 39% in the area around what is now Kamensk-Shakhtinsky .

Note: the proportions refer to the total number of inhabitants. Including the group of people who did not provide any information on their ethnic affiliation (2002 7,507 and 2010 76,735 people)

About 90% of the population of the area is Russian. The Armenians and Ukrainians are the most important ethnic minorities in Rostov Oblast. The number of Ukrainians - as well as the number of Belarusians, Russian Germans and Jews - is falling, however. This is partly due to a decline in the birth rate and emigration, and partly to assimilation. In contrast, the number of Armenians, Turks, Azerbaijanis, Roma / Zigans, Koreans and Georgians rose. Tens of thousands of people have immigrated from the North Caucasus, Transcaucasus, Anatolia and Central Asia since the end of the Soviet Union. In addition to the nationalities listed above, there are also many Dargins (1989: 6,179; 2010: 8,304 people) Udinen (1989: 162; 2010: 1,866), Assyrians (1989: 845; 2010: 1,774), Yazidis (1989: none; 2010: 1,771) and Kurds (1989: 34; 2010: 830). A large part of the non-ethnically Russian population lives in the larger cities of the region, where their proportion is correspondingly higher.

In terms of transport, the oblast is extremely conveniently located on the route from Moscow to the Caucasus and the Middle East . The transport infrastructure is well developed: a dense road and rail network is supplemented by two international ports ( Taganrog and Azov ), which are kept ice-free all year round, and the inland ports in Rostov and Ust-Donetsk . Access to the Volga and the Caspian Sea is via the Volga-Don Canal . There are direct flights to Rostov international airport from Frankfurt / Main and Vienna. There are five border crossings with Ukraine.

Taganrog harbor on the Sea of ​​Azov

Industry is highly developed, and Rostov is the industrial and economic center of southern Russia. In addition, the industry is concentrated in the next largest cities Taganrog , Shakhty , Novocherkassk , Volgodonsk , Novoschachtinsk and Bataisk . Mechanical engineering occupies the leading place in the industrial structure (electric locomotives, steam boilers, combine harvesters, sewing machines, helicopters, aircraft and vehicles, navigation systems, heating systems). But metal processing (black and non-ferrous metallurgy), chemistry and the petrochemical industry are also of great importance. Leading companies in the oblast include a. the agricultural machinery manufacturer Rostselmasch , the TagAS automobile plant in Taganrog, the agricultural holding Jug Russi , the Rostwertol helicopter plant , the Novocherkassk electric locomotive plant , Rostov Gasoapparat , the Belaja Kalitwa aluminum plant and the Tagmet metallurgical plant . The Rostov nuclear power plant is located near Volgodonsk .

Agriculture and the food industry are of great importance for the region. Intensive agriculture is practiced on the fertile black earth soils. Wheat, barley, rice, fruit, vegetables and aromatic plants as well as wine are grown. The region is the second largest supplier of agricultural products within Russia (after the neighboring Krasnodar Territory ). Within Russia, Rostov Oblast ranks first in the production of sunflower seeds, second in the cultivation of grain and bean crops, fourth in meat production, and eighth in vegetable cultivation. The main raw material deposits are coal, gas and natural building materials - limestone, chalk, sandstone, clay and quartz sand. This creates a good basis for the regional building materials industry.

The educational offer is considered to be well developed. There are five major universities and a number of colleges in the oblast. The main higher education institution is the South Federal University in Rostov, with almost 57,000 students.

Rostov Oblast is divided into 43 rajons and 12 urban districts .

To major cities include not only the main and big city Rostov-on-Don , the big cities Taganrog , Shakhty , Novocherkassk , Volgodonsk , Novoshakhtinsk and Bataisk and the historical significance of Azov . There are a total of 23 cities and 7 urban-type settlements in the oblast .

The territory administration with the Budjonny monument
See also : List of cities in Rostov Oblast