The title of this article is ambiguous. Further meanings are listed under Azov (disambiguation) .

Azov is located on the Don , 7 km from its confluence with the Sea of ​​Azov . 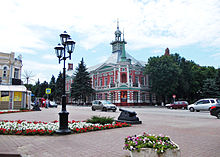 To the north of today's Azov are the remains of the ancient Greek city of Tanais , once an important trading center.

Under the rule of the Kyptschaks , the place was mentioned in 1067 as azak (i.e. lowlands), from which the current name is derived. The city flourished during the time of the Golden Horde in the 13th and 14th centuries. Venetian and Genoese merchants established a trading post they called Tana. Large parts of the trade in Tatar and Russian slaves were carried out via the trading colony, which was dominated by Venetians in the 14th and 15th centuries , although the constant rival Kaffa in the Crimea , controlled by Genoa, carried out this trade on an even larger scale. In addition, Tana was an important center for trade between the northern and southern Black Sea and a transshipment point for goods from the Far East, as the city was at the end of the so-called via mongolica (an arm of the Silk Road ) and relatively during the rule of the Golden Horde was sure.

In 1471 Azov was conquered by the Turks and converted into a fortress ( Turkish Azak ). 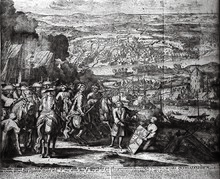 A first attack by Cossacks under Dmytro Wyschneweckyj on Azov failed in 1559. In the summer of 1637, the Don Cossacks captured the fortress, which was defended by 4,000 Ottoman soldiers with 200 guns. In June 1641, the Cossacks withstood a long siege by the Ottoman army . In 1642, after the Turks withdrew, Tsar Michael I decided to hand over the fortress to avoid a conflict with the Ottoman Empire . Before they left the fortress, the Cossacks destroyed all defenses.

After the first Asowfeldzug a siege had remained unsuccessful by Russian troops in the previous year, captured Peter I in the first successful battle his reign on July 28, 1696 Fortress Azov back. After the defeat in the Battle of the Prut in 1711, however, he had to return it to the Ottomans. In the Peace of Belgrade in 1739, the city fell back to Russia , which was finally confirmed during the reign of Catherine II in 1774.

For seven years, Azov was the capital of its own governorate, but as Rostov-on-Don grew , the city lost its importance.

During the Second World War , Azov was occupied by the German Wehrmacht on July 27, 1942 . On February 7, 1943, the city was liberated by the southern front of the Red Army .

On May 5, 2017, Azov was nicknamed the City of Military Bravery ( Russian Город воинской доблести ). The corresponding memorial column was erected on May 8, 2018 on Berjoska Square. 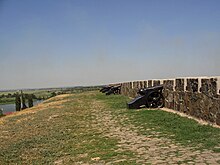 The area between the later city of Taganrog and Rostov-on-Don is being investigated by the DAI in cooperation with Russian archeology (see web link).

As early as 1823, the archaeological remains of IA Stempkowski, which were still visible at the time, were associated with ancient Tanais. PM Leontjew confirmed this a few decades later through test excavations. Systematic major excavations that began in 1955 and continued by DB Selow until 1993 were able to provide further insight into the structure of the ancient city. The main interest was essentially the history of the city in Rome. Only the investigations by the DAI led to findings about the archaic settlement. The agora of the Hellenistic period was also found, and the gate, which was laid out in the manner of a propylon , was the gateway to the agora from the port for two hundred years. The redesigns up to Roman times could also be examined more closely. The late antique development corresponded to a well thought-out urban planning scheme.

On January 1, 2012, the Asov city population was 94 percent ethnic Russians . Three percent were Ukrainians . A significant and long-established Armenian minority lives in Azov . Altogether more than 20 different ethnic groups live in Azov, including some Russian Germans .

From the 1950s onwards, Azov regained increasing economic importance and was one of the leading cities in the region in the field of construction and industry . Today Azov belongs to the Rostov agglomeration and is considered a dynamically developing business location with a well-developed infrastructure. Due to its favorable location on the Don, Azov will in future increasingly function as a logistical hub connecting southern Russia with national and international markets.

The main industries in the city are engineering and the food industry . There is also a sewing factory and a factory for the production of dietary supplements .

The agriculture plays an important role, they are mainly in the Azov area wheat , corn and sunflower grown.

With the Asower Institute for Economics, Administration and Law, the city has its own university . There are also three university branches.