The Sea of ​​Azov ( Ukrainian Азо́вське мо́ре (Asowske more), Russian Азо́вское мо́ре (Azovskoye more), in ancient times also Palus Maeotis or Maiotis ) is a tributary of the Black Sea and is connected to it by the Kerch Strait . The city of Azov at the mouth of the Don is named after the inland sea . 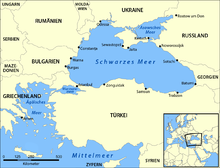 The location of the Sea of ​​Azov in Eastern Europe

At 37,600 km², the area is around 70 times as large as Lake Constance and slightly larger than Baden-Württemberg , but the maximum depth is only 14 meters. With this, and with an average water depth of only 8 meters, the Sea of ​​Azov is the shallowest sea on earth, which means that water temperatures of 25 to 30 ° C can easily be reached in summer , while it can freeze over for two to four months in winter. The salt content is on average eleven per thousand, in the northern parts it is only two to four per thousand.

The main tributaries are the Don and the Kuban . Due to their permanent inflow of freshwater, they ensure a relatively low salinity, which is only a quarter of the salinity in the Black Sea. The Greek historian Polybios (2nd century BC) reported this peculiarity in his historical work (Book IV.40-42).

The north coast of the Sea of ​​Azov has a number of partly very elongated spits :

The neighboring countries are Ukraine in the west and north and Russia in the southeast. The Crimean Peninsula and the Taman Peninsula separate the Azov from the Black Sea, with which it is connected by the Kerch Strait . The western end of the sea is formed by the Sywasch , a flat, salty system of bays and inland lakes.

According to a 2003 treaty between Russia and Ukraine, the Sea of ​​Azov is considered inland waters; Both states can control boats everywhere, which are also allowed to operate everywhere. This is "ideal for disrupting" traffic, wrote the NZZ : In 2018, primarily the Russian border guards made use of the control rights and held up merchant ships "from all over the world" every day, at times for up to several days.

The port cities of Berdyansk , Mariupol , Taganrog , Yeisk and (a little up the Don) Rostov-on-Don lie on the Sea of ​​Azov , as well as the city of Azov (at the mouth of the Don), from which the sea owes its name.

The climate on the Sea of ​​Azov is temperate continental. While the temperatures in January are 0 to 6 ° C, in July they reach values ​​of 23.5 to 24.5 ° C. The average annual temperature is around 9 to 11 ° C. The annual rainfall varies between 220 and 500 mm. In winter, strong frosts, thaws and foggy weather conditions often take turns. In the period from late December to early March, a permanent ice cover forms on the northern bank. Hurricane-like winter storms are notorious, sometimes pushing the drift ice into the Kerch Strait and blocking the passage.

A rich flora and fauna can be observed in the Sea of ​​Azov because of the high nutrient and oxygen input from the rivers as well as the good mixing of the water, accompanied by strong warming. The high plankton and benthos content also contributes to this diversity. Up to about 350 species of invertebrates and about 80 different species of fish are observed in the fauna of the Sea of ​​Azov, including perch , bream , minnow , coregonus , bullhead , herring , carp , mackerel , mullet , sea roach, plaice and sturgeon. Anchovies and sardines are particularly common. Numerous fish species are freshwater fish, the saltwater fish are predominantly immigrants from the Mediterranean. In the times of need after the Second World War, the supply of the population from this abundant fish stock was particularly important, although it was greatly reduced by predatory fish such as sturgeon and perch.

The area around the sea around 1600, the Crimean Khanate dominates the coast ( Azov and the cities on the southern coast of Crimea belonged directly to the Ottoman Empire)

The fish-rich waters became known in Greece through the journeys of the Milesians and Ionians ; there were colony foundations, z. B. in Pantikapaion and Phanagoreia . The Greek name was Maiotis limne , the Latin Maeotis palus . In the Hebrew Book of Anniversaries , the name is Meat . The Greek historian Polybios discussed in detail in his historical work (Book IV.39-40) the cause of the silting up of the sea. In the Middle Ages, the name Khazarian Sea was also common. The areas around the Sea of ​​Azov look back on an eventful past, because not only the Greeks founded colonies here; also very different peoples, z. B. the Avars, the Bulgarians, the Huns or the Goths passed through here during the migration period from the third to the ninth centuries. The area was under the rule of the Tatars for around 300 years, until the entire coast of the Azov Sea was passed over to the Russian Empire and the later Soviet Union from 1783. Since 1991 the north-west bank has belonged to Ukraine, the east bank to Russia.

Belonging to the Crimea is currently the subject of the Crimean crisis .

In addition to tourism, the very abundant fish stock is an economically important factor for the residents. Because of its flat sandy beaches and warm, dry summers, the Sea of ​​Azov is particularly popular with families with children. Hotels and sanatoriums with therapeutic treatments are important pillars of tourism.

After the annexation of Crimea by Russia in 2014, tourism on the Ukrainian bank increased; the number of tourists in Berdyansk in 2018 was several times the number before 2014. Shipping, on the other hand, suffered massive damage from the war in Donbass and the opening of the Crimean Bridge; in Mariupol, sales halved from 2013 to 2018. Planned expansions became obsolete. According to the director of the port of Mariupol, these economic effects are intended by Russia.

Since the Don through channels on the Volga with the Caspian Sea , Baltic Sea and the White Sea is connected to the Sea of Azov is a vital link for shipping towards the Black Sea. Because of the shallow water, navigating ships with a draft of more than 7 m is problematic and dangerous.

After the annexation of the Crimean peninsula between 2015 and 2018, Russia built the Crimean Bridge over the Kerch Strait. Until they opened there was a ferry service.

The Ukrainian government had protested against its construction since 2015: only ships up to 33 meters high can pass under the bridge, and the bridge cemented Russia's claim to the annexed Crimea. Shipping is additionally impaired by Russian controls in Kerch, where ships in traffic with Ukraine usually have to wait three days, but also up to 7 days for clearance; the same waiting times then apply to their exit.

Services such as MarineTraffic show that ships are jammed in the roads in front of the bridge passage. The logistics of the passages (permits, controls) are inadequate or deliberately disrupted.