Nomadization areas of the Nogai hordes. Orange: Nogai Khanate at the end of the 13th century under Nogai Khan; Darker orange on the Ural / Yaik river : remaining horde end of the 16th century; Violet: small horde; Light orange: Large horde in the mid-17th century after emigrating from the Kalmyks; Yellow: Uzbek khanate under the Janids.

Nogai Horde (alternative spelling is also Noghaier horde , Nogai Ногъай Ордасы NOGAJ Ordasy ) was the name of a historical Tatar Horde ; it existed from 1260/80 to the beginning of the 17th century.

It was traced back to a Mongolian prince or emir from the Gengiskhanids . This emir, known as Nogai, was originally a subhan within the Golden Horde .

The Nogaier Horde also had the reputation of "steppe vagabonds", as the Horde also accepted outcasts and outsiders . From this Nogai horde the present-day Turkic people of the Nogai developed in the period that followed .

In the 2nd half of the 13th century, from around 1260, Emir Nogai rose on the western flank of the Golden Horde, in the area of ​​today's Ukraine , to become the actual ruler of the "southern Russian steppe". In his function as emir he was de jure subordinate to the Khan of the Golden Horde and responsible, but after 1280 Nogai neglected his loyalty to the Khan and introduced his own coinage and the area ruled by Nogai became de facto independent. He also sought close diplomatic alliance with the Mongolian Ilchan dynasty in present-day Iran , which wrestled with the princes of the Golden Horde for the Caucasus region.

In late 1299, Emir Nogai was defeated and killed in a war with the rightful Khan. The Horde under his control was disbanded and their population dispersed in the areas of the Golden Horde. Some of them were settled in the Aral Sea , others in the southern Ural region, for example .

A son of Nogai, Chaka , was later killed in Bulgaria and a grandson named Qara-kesek escaped to Podolia .

During the 14th century, the khanate of the Golden Horde deteriorated. Numerous petty princes joined together to form new tribal federations. In the 15th century, the Nogaier horde moved back into the focus of history. For example, an influential emir named Edigü († 1419) was called "Lord of the Nogaier or Mangit Horde". The Mangit were originally a Mongolian clan , which was completely Turkic as early as the 14th century and had settled between the Volga and Emba , among other places . 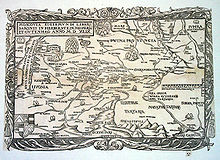 Map of Russia (Moscovia) by Sigismund von Herberstein, 1549. The Nogai Tartars (Nagayski Tartars) are drawn on the Volga

So far it has not been clearly clarified in which relationship the Nogaiians stood to the Mangit and how the mutual use of the names of "Nogaiians" and "Mangit" in the various Russian, Crimean Tatar and Ottoman sources of the 15th century came about. Personal ties between the two clans cannot be ruled out entirely.

In the course of the 15th and 16th centuries, the groups of the "Nogaier" and the "Mangit" wandered through the southern Russian steppes under the leadership of various princes from the Edigus family. They initially had a center on the Urals and were located between the Astrakhan Khanate and the "Little Nogai Horde". The Nogai accepted various outsiders into their tribal federation and, as allies of the Astrakhan Khanate, they also took part in the internal power struggles of the Golden Horde:

Under pressure from the Russians and the Kalmyks

A Tatar prince named Qasim formed the Astrakhan Khanate in 1466, which was closely allied with the Nogaiians. It was conquered (like the Kazan Khanate before ) in 1555 by the Russians of Tsar Ivan IV , and the Nogai were also defeated. After that, the Nogaiians gradually split up into groups: the "Great Horde" under Khan Ismail (ruled approx. 1554–1563 / 4) on the Ural River and the "Small Nogai Horde" under Khan Qasim (ruled approx . 1555–1601) near Azov , which was practically under the protection of the Crimean Khanate there and spread further west into the areas of Jedisan , Budschak and Dobruja, which were directly controlled by the Ottoman Empire . The Nogai, as members of the Umma , thus also contributed to the spread of Islam in the Ukraine , Romania and Bulgaria .

At the beginning of the 17th century, the Kalmyks emigrated from western Mongolia and, under Khu Urluk († 1644), became a threat to the Nogai "Great Horde" on the Ural River. These and the "Little Nogaier Horde" had to deal with them around 1616 and lost. After further heavy defeats around 1633, the majority of the Nogai people gave up the settlement area on the Ural River and fled westward to the area of ​​the "Little Horde", to Azov and beyond the Don . The Kalmyks were usually allied with Russia afterwards. Tsar Peter I also used the Kalmyks of Khan Ayuki (r. 1670–1724) against the Nogai people. This is why the Nogai people increasingly settled on the Kuban and in the Caucasus in the 18th century , an exodus that intensified after the conquest of the Crimean Khanate by Russia under Tsarina Catherine II in 1783.

Another part of the Nogaier or Mangit migrated with the Uzbeks around 1500 to Qarshi and Bukhara , whereby it can be assumed that other groups followed them in the 16th to 18th centuries. When the Astrakhan khanate fell to the Russian tsar in 1555, an Astrakhan prince fled to the Uzbek khanate and married into the ruling family. During the Janid dynasty in Bukhara (1598–1785), which came from Astrakhan, the Nogai people also had great influence there. A Nogai named Muhammad Rahim (ruled 1753–1758) even usurped the throne of Bukhara himself. The last Janid Abu'l Ghazi (1758–85) was followed by his son-in-law, the Nogai Ma'sum Shah (r. 1785–1800), who founded the Emirate of Bukhara and whose Mangite dynasty remained in power there until 1920.

in the Yaik Volga region: