According to the depiction of Raschid ed Din published around 1303, Nogai was the son of Prince Tatar. This made him the grandson of Boal and great-grandson Jochis. Nogai was the great-nephew of Batu Khan , the actual founder of the Golden Horde.

General of the Golden Horde

Nothing is known about the early years of Nogai. He first appeared in 1259 as the general of Tulabugha , a prince and later Khan of the Golden Horde. He led a Mongolian army in a campaign against Poland. In 1260 he took part - this time on behalf of Berke Khan , reigning Khan of the Golden Horde - in disputes over possession of the Caucasus . In 1261 he allied himself with the Byzantine Emperor Michael VIII and took part in a war against the Bulgarians; In gratitude he received tribute and a daughter of the emperor, Euphorasyne, whom he took as his wife. The son Tschaka Nogai also emerged from this marriage . In the period between 1262 and 1263 and between 1265 and 1267 he undertook several campaigns that were carried out in the context of the disputes between Berke and the related Ilchanat . In the process, Nogai lost an eye. 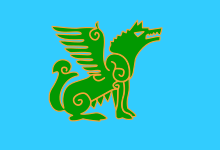 Ethnic flag of the Nogai people

From around 1270 Nogai created his own nomadic following, with whom he directly ruled the steppe areas in the south of the Golden Horde from the Dobruja to the lower Volga and the Caucasus and independently intervened in the politics of surrounding countries. He adhered to the Mongolian religion and customs for a relatively long time - while Berke Khan and the first nobles of the Mongol Empire had already converted to Islam; this made him popular with other aristocrats and parts of the Mongolian population. However, he was tolerant in religious matters, and his main wife was also a Christian. In the course of his ascent, however, he also converted to Islam in 1271. Islam was hardly widespread among his troops until Nogai's death.

When a campaign by the Golden Horde against Lithuania failed in 1275, Nogai raised his own army and undertook a new campaign. Shortly afterwards he put down a Bulgarian uprising.

Around 1280, when Berke's successor Möngke Khan died, Nogai began to loosen his ties to the higher-ranking Golden Horde and to neglect his vassal duty towards the Khan. So he founded the practically independent Nogaier horde and led z. B. an independent coinage. The coins were inscribed in Greek .

His power base lay in the Crimea and in large parts of today's Ukraine as well as in parts of the Caucasus region . Nogai maintained close ties with neighboring Ilchanat . For example, his son Turai was married to a daughter of the Ilkhan Abaqa. His son Tschaka was married to a daughter of the Bulgarian Cuman ruler Georg I Terter, who had already become a vassal of Nogais in 1285 . Tschaka replaced Georg I. Terter as Tsar of the Bulgarians between 1299 and 1300, so that the territory of the Nogai Horde was extended to the Volga and Danube .

Falling out with the khan

From then on, Nogai began to pursue foreign policy independently. So he took the administration of the Russian fiefdom in hand, in particular he independently appointed Dimitri I as Grand Duke of Russia. He led a campaign against Serbia , Bulgaria , Macedonia and Thrace and undertook an incursion of Mongolian troops into Hungary and Poland between 1285 and 1287 . In particular due to the high losses in the latter, he began to fall out of favor with the reigning Khan of the Golden Horde.

Since Nogai did not come from the line of Batus, he could not become Khan himself (although various Russian sources refer to him as " Tsar ", whose Mongolian equivalent was "Khan"). He and his followers believed that those territories that could be achieved under his leadership belonged to him personally and not to the Golden Horde.

In particular with his great-nephew Tokta (r. 1291-1312), the reigning Khan of the Golden Horde, he soon got into a violent dispute. He supported various Toktas brothers, who in turn claimed the title of khan and thus power in the Golden Horde. Nogai later led his own campaigns against Tokta, which he was able to win mostly because of his military skills.

But in 1299 Nogai was defeated by Tokta near Kükanalik (on the Dnepr ?) And killed on the subsequent escape. This defeat, and with it Nogai's death, can be traced back to his sons, who quarreled with several of Nogai's commanders during the campaigns; they then went over to Tokta with their associations and took part on his side in the decisive battle against Nogai.

Nogai's death sealed the independence of his territories, which were firmly reintegrated into the Golden Horde. The population, who continued to call themselves "Nogai", was resettled in the area between the Aral Sea , the Lower Volga and the Urals , so that the name of the Horde shifted to the east.