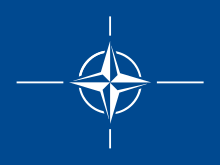 The command structure is under the political leadership at NATO headquarters in Brussels with the North Atlantic Council as the decisive body and the NATO Military Committee as the highest military body. The NCP is supplemented by the NATO Force Structure , which consists of the national armed forces of the member states and national or multinational headquarters at the tactical level. 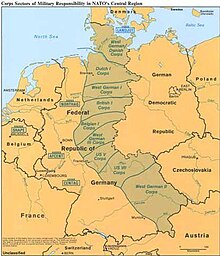 Since the founding of NATO in 1949, the command structure has repeatedly been adapted to the military-political realities. During the Cold War , this consisted mainly of three command areas:

At the second level are the ACO the following two "Operational commands" ( Operational Commands assumed):

The Joint Headquarters Lisbon ( JHC-Lisbon ) in Lisbon , Portugal was dissolved in December 2012.

The NATO Airborne Early Warning & Control Force Command ( NAEW & CFC ), which is stationed together with SHAPE in Casteau near Mons, Belgium, is also subordinate to SACEUR .

The operational commands, supported by commands from the armed forces, conduct operations such as SFOR , Operation Active Endeavor , KFOR (both in Naples) as well as ISAF and Air Policing Baltic States (Brunssum).

The tactical level consists of the Allied Air Command AIRCOM in Ramstein with two Combined Air Operations Centers (CAOCs) in Uedem , Germany and Torrejón , Spain and a Deployable Air Command and Control Center (DACCC) in Poggio Renatico , Italy. The Allied Air Command Izmir and the CAOC's in Finderup , Denmark and Larisa , Greece were dissolved.

And since December 2012 the Allied Land Command LANDCOM in Izmir , Turkey. The previous land force commands in Heidelberg and Madrid were dissolved in April and June 2013.

In addition, the headquarters of rapidly deployable corps are available to ACO , including the Allied Command Europe Rapid Reaction Corps (ARRC). However, as national or multinational headquarters, these themselves do not belong to the NCP, but to the NATO armed forces structure.

ACT is subordinate to a number of training, testing and research facilities, including the Joint Warfare Center ( JWC ) in Stavanger , Norway, the Joint Force Training Center ( JFTC ) in Bydgoszcz , Poland, the Joint Analysis & Lessons Learned Center ( JALLC ) in Monsanto , Portugal, the Center for Maritime Research and Experimentation ( CMRE ) in La Spezia , Italy and the NATO school in Oberammergau .

In addition to the Strategic Commands, NATO Headquarters reports directly to a number of other institutions, including the Canada-US Regional Planning Group ( CUSRPG ), the Combined Joint Planning Staff ( CJPS ) in Mons, Belgium and the NATO Defense College in Rome , Italy.