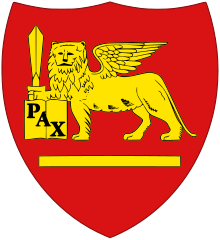 Coat of arms of the AFSOUTH and the later JFC Naples

From March 2004 the main command Allied Joint Force Command Naples ( JFC Naples ) was transformed from the previous structures of AFSOUTH .

The countries: Portugal , Italy , Greece , Turkey , from 1982 also Spain and from 1999 Hungary belonged to the former area of ​​responsibility of AFSOUTH . It also included the Black Sea , the Sea of ​​Azov , the entire Mediterranean and the accesses from the Atlantic to the Strait of Gibraltar east of longitude 7 ° 23 '48 ”W as well as an area around the Canary Islands and the associated airspace . The region was geographically separated from the AFCENT region by the neutral states of Switzerland and Austria .

AFSOUTH's commander was an officer with the rank of four-star admiral or four-star general of the United States.

Structure in the Cold War