The Greek Navy has existed since the Wars of Independence against the Turks in 1821, and at the time of construction consisted primarily of ships from the merchant fleet of the Aegean islands.

The Greek Navy has a special responsibility in protecting Greece and its citizens, which results from Greece's maritime dependence. International conflict prevention and crisis management are also at the forefront of the Navy's range of tasks.

The Greek Navy today consists of around 100 maritime units, divided into combat units and support units, as well as helicopters for submarine combat and electronic warfare . A number of anti-ship missiles are stationed on the mainland and also under the navy. The main bases of the navy are on the island of Salamis and in Souda on the island of Crete . The Navy maintains its own special unit (OYK combat swimmers), which is based on the principle of American SEALS .

For the further modernization of the Navy, the procurement of several AAW ships, further aircraft for maritime surveillance as well as a rescue ship for submarines and an LPD ship are planned. 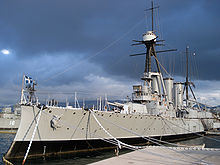 Cruiser Georgios Averoff , flagship of the Greek Navy in the Balkan Wars , now a museum 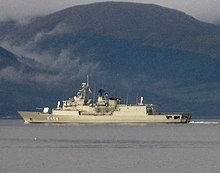 Command structure of the Greek Navy

The official management of the Navy is incumbent on the Chief of Staff (gr. Αρχηγός του Γενικού Επιτελείου Ναυτικού, ύ / ΓΕΝ for short) of the Navy in Athens.

The Greek Coast Guard ( Greek Λιμενικό Σώμα Limenikó Sṓma ) is subordinate to the civilian control of the Ministry of Merchant Shipping in times of peace. In the event of war, it is under the command of the Ministry of Defense. The Coast Guard was founded in 1919 by the then Prime Minister Eleftherios Venizelos .