Electronic warfare ( EloKa ) includes telecommunications and electronic reconnaissance (Fm / EloAufkl) and electronic combat (EK). It records and evaluates opposing electromagnetic and acoustic emissions. Electronic combat measures such as disrupting, deceiving and neutralizing the opponent's capabilities for electronically assisted guidance, clarification and the effect of his forces and means are restricted, diverted or switched off. At the same time, the electronic warfare ensures the use of the electromagnetic and acoustic spectrum for the guidance of one's own forces and provides the effectiveness of the reconnaissance and weapon systems, etc. a. through electronic protective and countermeasures , safely. It contributes to information operations and to the effect in the information space. 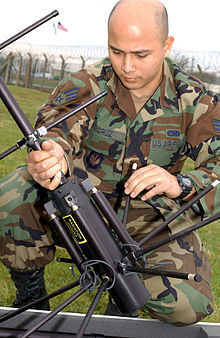 A US Air Force soldier assembles a PSC-5 tactical satellite radio at the British Air Force Base in Fairford.

Electronic warfare is divided into the following categories:

The radar devices for air reconnaissance are a means of electronic protective measures , for example to protect a ship of the navy from surprise attacks from the air. The opponent now uses telecommunications and electronic reconnaissance equipment to measure the frequency range of the radar device used from a great distance. This frequency powerful interference generator is ( English radar jammer ) set, which as an instrument of the electronic countermeasure is classified: This should substantially reduce the range of the radar or (through import of false information by overloading the radar receiver (noise or impulse noise) false targets ) mask your own target characters. The disturbed radar device now uses special assemblies to reduce the effect of the interference radiation or to render the interference ineffective. These interference suppression devices are devices of electronic protective measures .

The EloKa telecommunications unit of the German Armed Forces as an electronic warfare instrument is combined in the cyber and information space organizational area. There, the Strategic Reconnaissance Command leads, among other things, an evaluation center for electronic warfare and four EloKa battalions. In the army there are no longer any EloKa forces that can be deployed autonomously. Which the Marine below reconnaissance ships (fleet service boats) are also used by the Strategic Reconnaissance Command. Its crew is provided by the 2nd / Battalion Electronic Warfare 912 in Nienburg / Weser . In addition, the navy's frigates and corvettes have autonomous EloKa systems (FL1800 II, KORA, UL5000k, MRBR, RIGEL). The combat aircraft ( Eurofighter , Tornado ) of the German Air Force also have self-protection systems that work in the electromagnetic spectrum. In the future, the field of optronics will also be one of the tasks of the EloKa telecommunications team, which will also include the detection of laser signals.

The four EKF Abt 51-53 have to create, operate, maintain and secure an operational electronic reconnaissance system (Op EA Syst) and a tactical electronic reconnaissance system (Takt EA Syst). The systems are designed for the greatest possible mobility and efficiency. Their primary area of ​​application is the acquisition of short-term information about movements of the opponent for tactical decisions. During the European Football Championship in 2008 , departments 51 and 52 performed assistance.

Department 46, which mainly operates from permanent locations, deals with the procurement of strategic information at the army level.

Operational and tactical electronic reconnaissance is a means of obtaining information that is important from a security policy and military point of view by recording and evaluating external electromagnetic emissions. This essentially includes telecommunication connections (any type of wireless telecommunication traffic). The acquisition of news by the operational and tactical COMINT has the purpose of providing the commissioning body with contributions to assess the situation. The COMINT organization responsible in each case has the function of a news and information source. Funds for electronic countermeasures are currently lacking, but their acquisition is planned.