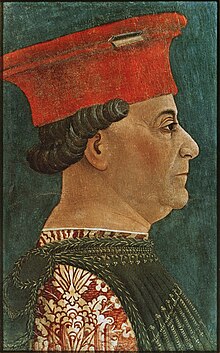 Portrait of Francesco Sforza by Bonifazio Bembo , around 1460, Pinacoteca di Brera , Milan.
Sforza insisted on being painted with the old hat he wore as a condottiere .

Francesco was the illegitimate son of Muzio Attendolo Sforza and Lucia of Torsano. After his father's death in 1424 he took over the leadership of his mercenary troops , for which he qualified on the one hand through physical strength (he was famous for bending metal with his bare hands), but later also as an exceptional tactician and commander.

He served the Visconti against Venice and then Venice against the Visconti, attacked the Pope, drove him out of Romagna and later defended him.

Francesco Sforza was his first marriage on October 19, 1418, Polissena Ruffo, daughter of Carlo Ruffo, Count of Montalto . With her he had a daughter who was also called Polissena and died in 1420, the same year the mother also died. In 1441 he married Bianca Maria (around 1424–1468), the only daughter of Filippo Maria Visconti , Duke of Milan . He received Pontremoli and Cremona as a dowry as well as the promise of succession in the duchy. The short-lived Ambrosian Republic , established by the Milanese when Visconti died (1447), was subjugated by Francesco, who triumphantly entered the city as Duke on March 25, 1450. In the Peace of Lodi in 1454 he achieved the recognition of his rule by the Republic of Venice, which the other Italian states soon followed. He suppressed an uprising in Piacenza , allied closely with Cosimo de 'Medici (1389–1464) and Louis XI. of France (ruled 1461–1483) and ruled Lombardy , some areas south of the Po and even Genoa .

He had the Porta Giovio fortress rebuilt, the great hospital and the Martesana Canal, which connects Milan with the Adda ; his court, which he filled with Italian scholars and Greek exiles (as a result of the conquest of Constantinople ), quickly became one of the most distinguished in Italy. His daughter Ippolita was famous for her Latin speeches. Francesco left several sons, including Galeazzo Maria , Ludovico , called "il Moro" ("the dark one" or "the Moor"), and Ascanio Sforza , who became a cardinal .

Francesco is mentioned several times in Machiavelli's "Il principe" ( The Prince ); he is consistently praised for his abilities as regent, but also presented as a warning not to associate with mercenary troops. On behalf of his son Ludovico Sforza, Leonardo da Vinci was busy planning a monumental equestrian statue of Francesco Sforza from around 1489 , but it was never executed.

With his second wife Bianca Maria Visconti he had the following children: