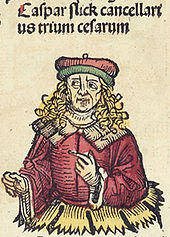 Kaspar Schlick (* around 1396 in Eger ; † July 19, 1449 in Vienna ), Count of Passaun and Weißkirchen, was Chancellor of the Holy Roman Empire ; he was the first incumbent to be a layperson and of civil origin. The Freising Bishop Heinrich II. Schlick was his brother.

Kaspar Schlick was born as the son of the businessman and councilor Heinrich Schlick and the Constantia di Collalto Margravine of Treviso in Eger, the second oldest of eight children. He attended the university in Leipzig and then entered the service of the Bohemian King Sigismund . From 1415 to 1417 he accompanied the king on his travels to Spain , France and England . In 1416 he was appointed scribe, 1426 royal secretary, 1427 protonotary , 1429 royal vice-chancellor and 1433 imperial chancellor of Emperor Sigismund.

Schlick was Imperial Chancellor from 1433 to 1437 under Emperor Sigismund and Chancellor under King Albrecht II and Friedrich III. In 1435 Kaspar Schlick and his brother Matthäus received Gut and Herrschaft Falkenau from Emperor Sigismund as a gift. As the emperor's influential politician, he took part in several campaigns against the Ottoman Empire and the Hussites , negotiated in the name of the king in Prussia , Poland and Lithuania, and conducted domestic negotiations with the Hussites. He accompanied Sigismund to the Council of Basel and took part in his imperial coronation in Rome . In his position he acted as a negotiator with the Pope. Even under King Albrecht II, whom he supported in enforcing the royal succession in Bohemia, Schlick remained in office, despite domestic political opposition.

Schlick was in 1442 in the royal council of Friedrich III. and reappointed Chancellor in 1443. However, his influence diminished over time as his ideas did not always coincide with those of the king. He campaigned for his younger brother Heinrich to be appointed Bishop of Freising , although the cathedral chapter there had chosen a different candidate. In 1449 he retired from his office, but then took part in the royal succession of King Ladislaus , on whose behalf he had negotiated in Milan in 1447 .

In addition to politics, Schlick was also interested in art and science. He supported talented artists and scientists such as Enea Silvio Piccolomini . For his services he received lands in the Egerland as well as in the then Hungarian Weißkirchen ( Holíč , now Slovakia). Schlick was raised to Baron von Weißkirchen in 1422, Imperial Count of Passaun ( Bassano , in northern Italy) in 1437 and Count of Passaun and Weißkirchen in 1438.