The German Fleet Association (DFV) was an amalgamation of individuals and associations who wanted to work towards an expansion of the German Reich's fleet. He had a decisive influence on navalist politics in the German Empire . It was founded on April 30, 1898 in Berlin and existed until its dissolution by the National Socialists in December 1934. From 1919 to 1931 it operated under the name Deutscher Seeverein .

The purpose of this fleet association was to arouse and cultivate the understanding and interest of the German people for the importance and tasks of the Imperial Navy and to take care of the members of the fleet, provided that the legislation and administration of the German Reich was sufficient Couldn't guarantee care.

Advertisement for the German Fleet Association 1902

The German Fleet Association sought to achieve its goals through lectures and the publication of magazines:

The first German fleet, the Reichsflotte , was founded on June 14, 1848. At that time, the Frankfurt National Assembly decided to build a fleet to break the Danish naval blockade in the war against Denmark . Reich Minister of War Arnold Duckwitz and Rear Admiral Karl Rudolf Brommy managed to provide a number of ships, even if their clout was still low. After the revolution was suppressed, the Reichsflotte became the property of the restored German Confederation. He saw no willingness among the member states to pay for a fleet. In 1852 he therefore decided to dissolve the fleet.

The North German Confederation from 1867 onwards again founded a navy. This North German Navy took over the Prussian one. Until the naval war in the Franco-Prussian War of 1870/1871, however, it again failed to make a decisive contribution to victory at sea. The fleet only became large and important in the period after 1871, in the German Empire.

After 1880 there was a race for the division of the earth among the great powers (“ colonialism ”) and after a great economic upswing Germany also wanted to assert “its place in the sun ” and its claim as a “ world power ”. With Kaiser Wilhelm II. , Who had announced the departure into world politics in 1896, many politicians, journalists and business leaders were convinced that Germany had to give up its role as a calming factor in European politics and pursue world politics in order to avoid its great power status in the long term endangered in Europe. Without a powerful fleet, following the example of Great Britain and increasingly Japan, world politics could not be pursued in the opinion of many and thus the construction of battle fleets played a decisive role. From 1897, the driving force behind it was the State Secretary of the Reichsmarineamt , Alfred von Tirpitz , for whom the Fleet Association opened up good propaganda opportunities.

Since all the great sea powers had started building large ironclad ships in 1880 , Germany was in line with the naval policies of other great powers with the planned construction of capital ships. The worldwide armament "set the first modern arms spiral in motion, the extent, cost intensity and risk potential of which exceeded the parallel armament of the land forces ".

The Fleet Act of 1898 and various amendments to the fleet in the following years resulted in rapid German naval armament in the race with the British battle fleet construction. The cost was gigantic; In the last years of peace, 25% of the total armaments budget was used to build the fleet. “In 1914 the German and British fleets faced each other in a ratio of 10: 16. "

The construction of the battle fleet pursued by Tirpitz was supposed to make every war with Germany a real risk for Great Britain (“ risk fleet ”). The idea that Great Britain could be forced to the side of Germany in this way turned out to be a great foreign policy illusion, because the forced German fleet building promoted Great Britain's willingness to compromise with France and Russia and ultimately led to the anti-German coalition, the so-called Entente before the First World War . 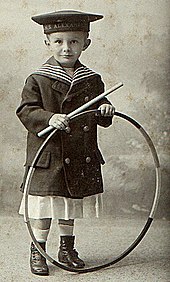 The Flottenverein was founded in April 1898 by representatives of economic interests ( heavy industry , especially Krupp , shipyards and banks), politicians and public relations experts who Tirpitz had gathered in the "news office" of the Reichsmarineamt . The aim of the association was to make the construction of the battle fleet a popular task for the entire nation on its way to world power. Within a very short time, the association succeeded in mobilizing a broad public for its goals through an endless flood of cleverly presented propaganda material created by Tirpitz's news office. The support from the Reich authorities and authorities of all kinds down to the village level was helpful, which gave the association a semi-state character.

On this basis the association developed a very effective form of military lobbyism over the years . The mobilization of the public was intended to convince the members of the Reichstag of the need for broad approval of the increasingly expensive fleet proposals.

The popularity of the sailor suit and the young people's passion for collecting postcards with ships of the fleet can be seen as a symbol for the fleet enthusiasm generated by propaganda campaigns in broad sections of the population .

Despite the success in recruiting members, there was a club crisis at the national level in 1908. Many members criticized the semi-governmental character of the association and formed a "radically anti-governmental wing". In 1908 this wing had to retire. In order to compensate for the decline in membership, advertising was intensified.

In the Second Moroccan Crisis of 1911, the Fleet Association went public for the first time with a meeting. In July 1911, the German Reich had sent the gunboat Panther demonstratively to the southern Moroccan port of Agadir ( Panthersprung nach Agadir ) to protest against France's efforts to make Morocco a French protectorate. As a result of this threatening gesture, Great Britain and France moved closer together as they saw important interests threatened. The crisis threatened to escalate; Europe was on the verge of a major military confrontation. It was only after long negotiations that a compromise was reached at the beginning of November: In return for a small amount of colonial compensation, the German Reich recognized the French protectorate over Morocco .

During the crisis there was a wave of national excitement in Germany. In public, doubts have been expressed about the ability of the constitutional monarchy to struggle for existence. Wilhelm II was accused of being sloppy and the fact that the government had entered into negotiations constituted treason for many nationalists. The national associations wanted to seize the opportunity to increase military spending.

On October 3, 1911, the Reichsvorstand called on all local groups to hold general meetings from October 8 to 16, in which speakers “clearly point out the current situation and the need for an accelerated expansion of our armed forces at sea ... with sparkling Give speech a picture of the current situation, highlight the necessity of the fleet to maintain our independence ... ... The armored cruisers so necessary for the fleet, which are twice missing in a war with the British-French coalition, must be built as quickly as possible. ”A pre-formulated speech and material for leaflets were included. A ready-made resolution followed on October 6, 1911, which was to be sent to the Reich Chancellor by telegram and submitted to the Reichstag.

During the First World War, the Tirpitz-style battle fleet proved to be a misconception, a grandiose failure. At no time has it been able to significantly influence the course of the war since the summer of 1914. You could neither prevent the effective British remote blockade nor force a decisive battle in the North Sea, because the risk of a total loss of the fleet because of the superiority of the Grand Fleet was too great. In the course of the war, the battle fleet became an auxiliary weapon of the U-boat war and provided escorts for the incoming and outgoing submarines. Great Britain remained the undisputed greatest naval power in the world.

At the end of October 1918, the naval command ordered an attack by the fleet on Great Britain in order not to have to surrender without a fight (and thus dishonorable according to the point of view of the time). The sailors refused this senseless order, extinguished the fires under the steam boilers of the battleships and thus triggered the Kiel sailors' uprising and the November Revolution and thus the end of the German Empire. As a result, there were further withdrawals from the fleet association.