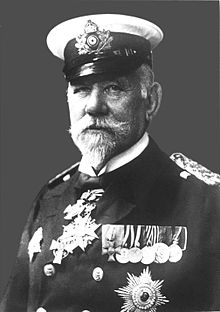 Grave in the north cemetery in Kiel

Hans Koester was the son of the author of the same name and a temporary member of the Reichstag. On June 21, 1859, he joined the Prussian Navy , which was at the very beginning, as a cadet candidate. In 1875 he was promoted to corvette captain , until 1880 he was deployed on various training ships as first officer , most recently on the covered corvette SMS Prinz Adalbert , with which Koester made a world trip from 1878 to 1880. His first long independent command as commander of the brig SMS Undine led him in 1874/75 on a 15-month trip to North, Central and South America.

In 1881 Koester was promoted to sea captain. Until his appointment as Rear Admiral in 1889, his most important posts were in 1883 in command of the training ship frigate SMS Niobe , in 1884 in command of the ironclad SMS Württemberg and in 1887 in command of the armored frigate SMS König Wilhelm , the largest ship in the Imperial Navy at the time . From autumn 1884 to 1889 he was head of the staff of the Admiralty in Berlin for two and a half years and chief shipyard director in Kiel for one and a half years . In 1892 he was promoted to Vice Admiral. Until 1903 he occupied the post as head of the command of the naval station of the Baltic Sea in Kiel. In this position he strongly encouraged the development of the ambitious garrison town. In 1897 he was promoted to admiral , in 1899 he was appointed inspector general of the navy. After a violent dispute between Tirpitz , Senden-Bibran and Koester in autumn 1903 about further naval policy, Kaiser Wilhelm II decided to dismiss Koester as general inspector. On June 28, 1905, he was the first German naval officer to receive the rank of Grand Admiral, six months later he was dismissed on December 31, 1905 at his own request.

In 1908 he was elected President of the German Fleet Association, founded in 1898 . He resigned from this position in October 1919, but became honorary president of the association that was now called the Deutscher Seeverein. During the First World War he worked as a delegate of the Imperial Navy for nursing. On September 18, 1902, he was awarded the Order of the Black Eagle , on September 17, 1905, he was appointed a member of the Prussian mansion for life and on June 21, 1909, the Black Eagle was awarded the diamonds. On April 29, 1914 he was granted honorary citizenship of the city of Kiel .

Koester was buried in a grave of honor in the north cemetery in Kiel , and Koesterallee in Kiel was named after him as early as 1906.

From 1935 to 1947 the bank opposite the former Reichsmarineamt in Berlin-Tiergarten was named after him as "Großadmiral-von-Koester-Ufer"; today again “Schöneberger Ufer”.