Order of the Crown of Italy 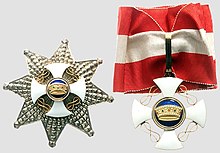 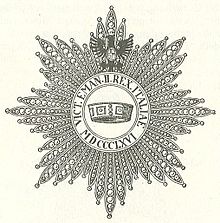 Star of the Grand Cross

The Order of the Crown of Italy ( Italian: Ordine della Corona d'Italia ) was founded on February 20, 1868 by King Victor Emanuel II as an Order of Merit in memory of the unification of Italy . It was intended to reward extraordinary services in the direct interest of the nation by Italians and foreigners.

Wearing method of the order (from left to right) V. to I. class

The order was divided into five classes and the number of members was limited:

The medal is a gold-braided, white-enamelled Ruppert cross , through whose corner golden love ropes loop and in whose gold-braided sky-blue heart shield the iron crown of Lombardy , which here stands for the crown of Italy, is in a plastic representation. The lapel of the medallion is gold, inside a crowned black eagle with the Savoy-Italian white cross in the red oval breast shield.

The grand cross was carried on a sash from the right shoulder to the left hip as well as with an eight-pointed breast star . The medallion of the breast star, which is surmounted by a black eagle, is surrounded by a circlet with the inscription VICT. EMAN. II. REX. ITALIAE MDCCCLXVI  ((Victor Emanuel II. King of Italy 1866).) Grand officers wore the award as a neck medal in addition to an octagonal star with an overlaid medal. Commander decorated without a breast star, officer and knight on the ribbon on the left breast side. A rosette is also attached to the officers' band.

The band is light cherry red with a white central stripe 1/4 of the band width.

Commons : Order of the Crown of Italy  - Collection of images, videos and audio files

Order of the Kingdom of Italy