The city of Hochheim is located about 35 meters above the Lower Main level on a step on the southern edge of the Main-Taunus foreland. The southern slope of this terrain step, which extends over a length of about five kilometers , consists of vineyards , partly up to the banks of the Main . From the vineyards and the southern outskirts there is a distant view as far as Darmstadt , the Neunkircher Höhe in the Odenwald , the striking peak of the Melibokus on the Bergstrasse 38 kilometers away and finally to Oppenheim in Rheinhessen . The city skyline is visible from a great distance from the south.

The major cities of Frankfurt am Main , Wiesbaden and Mainz are in the immediate vicinity .

Hochheim borders in the north on Hofheim am Taunus , in the east on Flörsheim am Main , in the south, separated by the Main, on Rüsselsheim am Main , Bischofsheim and Ginsheim-Gustavsburg (all three districts of Groß-Gerau ) and in the west on the districts of Mainz- Kostheim and Delkenheim in the Hessian capital Wiesbaden .

Hochheim consists of the core town of Hochheim, the southern town located around the train station on the banks of the Main, which is separated from the old town of Hochheim by vineyards, and the district of Massenheim , which was incorporated in 1977 and has around 2000 inhabitants. Since that time the Wiesbadener Kreuz has also been part of the Hochheim city area.

A Celtic princely grave was found in Hochheim . In Roman times the area was already densely populated and viticulture was introduced. The name Hochheim goes back to the Alemanni who settled there in the 4th and 5th centuries , followed by the Franks .

At the Reichsdeputationshauptschluss , Hochheim fell to the Principality of Nassau-Usingen in 1803 , which in 1806 was united with the Principality of Nassau-Weilburg to form the Duchy of Nassau . On November 9th and 10th, 1813, the last battles of the Napoleonic troops before their withdrawal from Germany took place at Hochheimer Kippel. In this battle near Hochheim 1,800 casualties were complained about on the French side and more than 200 on the Allied side. A memorial exhibition was on view in the town hall of Hofheim am Taunus in April and May 2014.

From April 1817, Hochheim was the seat of a ducal Nassau office , and since 1820 the place has been run as a town without any documentary evidence of the granting of town charter. After the annexation of the Duchy of Nassau by Prussia in 1866, Hochheim came to the Prussian province of Hessen-Nassau . The previous Nassau offices were grouped into counties; Hochheim initially belonged to the Main district and later to the Wiesbaden district . When it was dissolved in 1928, the city was assigned to the Main-Taunus district. After the end of the Second World War , Hochheim and the former Prussian province of Nassau became part of the newly founded state of Hesse .

On January 1, 1977, the previously independent community of Massenheim was incorporated in the course of the regional reform in Hesse .

The city of Hochheim am Main has a coat of arms and a flag.

Description of the banner: “The colors of the city are white-blue-red. The banner is split white-blue-red with the coat of arms above the middle. "

a percentage of the valid votes cast 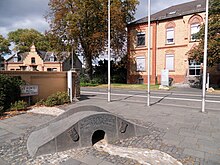 Hochheim has had a partnership with the town of Le Pontet in the Vaucluse département near Avignon since 1987 . There are also city friendships with the Hungarian city of Bonyhád in Tolna County (since 1997, also has a Hessian lion in the coat of arms) and the Thuringian city of Kölleda .

In Hochheim and Massenheim, 185 cultural and historical objects were placed under monument protection. These include the old town of Hochheim and the village center of Massenheim with many restored half-timbered houses. For the undisturbed view of the entire Hochheim complex, the vineyards sloping south towards the Main are considered a green area worth protecting. The view from the south has remained unchanged since the city wall was torn down at the beginning of the 19th century. The city has only grown to the north, east and west since then.

The eye-catcher in the southern silhouette of the city is the church of St. Peter and Paul , a baroque style church with frescoes by the German baroque painter Johann Baptist Enderle, who was born in Söflingen ( Ulm ) in 1725 . The restoration of the frescoes, which began in 1999, was completed in 2005.

In the old town there are two museums, the Weinbaumuseum and the Otto Schwabe Heimatmuseum, as well as gallery areas in the Hochheim art collection and exhibition space in the stairwell of the Hochheim town hall.

As part of the Rhine-Main Regional Park , north of Hochheim in the area of ​​the “Silbersee” gravel pit, the wooden bird's nest viewing platform was inaugurated in 2001 . 40 steps of a steel spiral staircase lead to the 7.5 m high viewing platform , which offers a good all-round view of the area. Approx. 600 m east of the 10 m high observation tower is within sight of the Hochheim play park with a 15 m high “tunnel slide”, the 13 m high “Tarzanschwinger” and other attractions. 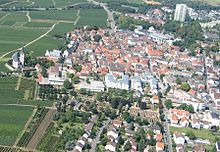 Old town - in the foreground: the old cemetery

Südstadt - at the left edge of the picture: sewage treatment plant

The industry to which the city owes its fame in the first place is viticulture . The name of the city has become a synonym for Rhine wine in general and for wine from the Rheingau in particular since the British Queen Victoria visited English-speaking countries in 1845 as Hock .

According to tradition, because of the good taste of Hochheimer wines and their nutritious suitability, the proverb established at the British court : “A good Hock keeps off the doc!” In a sense: A good Hochheimer replaces any doctor , or keeps the doctor away.

With 241 hectares of vineyards, Hochheim is one of the largest wine-growing communities in the Rheingau. The Hochheim district forms the core of the Daubhaus large area . The most famous locations are the Domdechaney and Kirchenstück locations below the old town as well as the small Königin-Viktoria-Berg , which is located east of the city above the railway line in the middle of Hell , where the neo-Gothic monument to the visit was made to the Queen Victoria remembers the Queen in Hochheim. Other locations are Berg , Herrnberg , Hofmeister , Reichestal , Stein and Stielweg . In addition, there is the Schlossgarten location in the Massenheim district. 80% of the vineyard area is planted with Riesling vines , 15% is made up of Pinot Noir and 5% is made up of Kerner, Müller-Thurgau and other grape varieties. The Domdechant Werner'sche Weingut is reminiscent of the connection to the Mainz clergy.

Every year at the beginning of November, the city is dominated by the Hochheimer Markt , one of the largest autumn markets in Germany. It has been held since 1484 and attracts almost half a million visitors for a weekend from Friday to Tuesday with a mixture of general, amusement and cattle markets.

On the first weekend in July there is a wine festival in Hochheim that attracts over a hundred thousand visitors.

The economic structure of the city of Hochheim had been subject to constant change since the Second World War. The internationally best known company based here is Tetra Pak , which has had its German headquarters here since 1965.

The federal motorway 671 runs on the western edge of the city with the junctions Hochheim Süd and Hochheim Nord. The federal highway 40 leads through the city to Mainz in the west and Flörsheim in the east. State road 3028 also leads to Flörsheim and Wiesbaden-Delkenheim.

The city lies within the Rhein-Main-Verkehrsverbund on the Taunus-Eisenbahn . At the Hochheim (Main) station, trains on the S1 line of the Rhein-Main S-Bahn between Rödermark-Ober-Roden , Frankfurt am Main and Wiesbaden stop . Since the timetable change in December 2018, the regional express lines RE 4 and RE 14 between Frankfurt Hbf and Mainz also stop here every hour . Every two hours, the RE 14 line continues towards Mannheim Hauptbahnhof via Worms and Frankenthal . The platform on tracks 2 and 3, where trains to Frankfurt start or stop and end from the opposite direction, is not barrier-free .

Hochheim is part of the pilot area in the Rhine-Main Regional Park with several developed and planned cycle paths, the following of which lead through the city or along the banks of the Main:

The following people were born in Hochheim, but mainly worked elsewhere:

Other personalities who lived and worked in Hochheim: