This article refers to Röhe as a district of Eschweiler. Further meanings can be found under Röhe (disambiguation) . 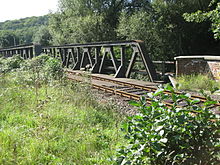 Röhe is a western district of Eschweiler in the North Rhine-Westphalian city ​​region of Aachen . Röhe lies almost entirely on a hillside on the edge of the Eschweiler Indetal , along a Napoleonic road that is now the B 264 . In addition, the A4 motorway divides Röhe into north and south.

The very sloping Röher Straße, which bends from the main road at the Hotel Schwan orientation point towards Aue , is popularly called Lazy Hering , which probably refers to the former swamps in the valley of the Inde.

In Röhe there was a Franciscan monastery and the Helene Nickel monastery .

Röhe is probably the oldest clearing site in the Eschweiler area before the 10th century. The original name Riuti with t lives on in the dialect in the possessive adjective rüet (röher) (common: Rüete Jonge: Röher boy i. S. v. Waschechter Röher) . Röhe was first mentioned in a document in 1346. Just like the two Eschweiler districts Bergrath and Röthgen , Röhe has belonged to the Eschweiler district in the Duchy of Jülich since the 16th century at the latest .

In 1879 the composer and music director Wilhelm Rinkens was born in Röhe .

In the spring of 1998 a 12 hectare Roman estate was found in Röhe . Neolithic finds are also known.

The Catholic Church of St. Antonius on Bundesstrasse 264 is a hallmark of Röhe. Until 1845, Röhe belonged to the parish of St. Peter and Paul in the city center. The construction of the chapel, consecrated to Saint Lucia in 1706 , by Franciscan hermits was the first step on the long road to independence. Although the French bishop of Aachen, Marc Antoine Berdolet , elevated the chapel to the branch church of Eschweiler in 1806 and appointed Father FJ Geller, a Franciscan of the Röhe order, which was repealed in 1802, as the first pastor of Röhe, but only two years later this was reversed, because the completely impoverished congregation did not bring about the required new church building. In 1843 the well-known Aachen church builder Johann Peter Cremer built today's St. Antonius Church. The classicist hall church, deliberately kept plain and simple, was made of local rubble stones. It was on August 26, 1845 consecrated , at the same time the final survey was conducted for the parish church . During the Second World War , the church was severely damaged and could only be used for worship in 1948 - poorly restored. Immediately after extensive renovation, the church was destroyed to the ground by fire on May 15, 1977. During the reconstruction, the interior was given a completely different face. It is mainly characterized by the effect of the unplastered quarry stone masonry. The interior design, windows and entrance portal are kept strict and modern overall. The St. Sebastianus Schützenbruderschaft 1856 belongs to St. Antonius . Since January 1st 2010, St. Antonius is again a branch church of the parish of St. Peter and Paul.

The Parkklinik Röhe is a clinic and day clinic for psychotherapeutic medicine . It has 19 inpatient and 14 day clinic treatment places. Individual and group therapies based on depth psychology, systemic-integrative family constellations , behavioral therapy , creative therapies as well as systemic couple and family therapies are carried out on an outpatient basis. The Academy for Psychosomatics in the Working World is affiliated . The medical director is Wolfgang Hagemann. The carrier is the Röher Parkklinik GmbH . The Parkklinik was founded in 1996. The Röher Villa has been part of the Röher Parkklinik since January 2007. The park of the clinic thus amounts to more than 9000 square meters.

The six Röhe bus stops Aachener Straße, Am Römerberg, Kirche Röhe, Röhe Villa, Schwan and Wasserwerk are served by the AVV bus lines EW4, 28 and 52 and connect Röhe directly with the Eschweiler bus station , the districts of Aue, Hehlrath , Kinzweiler and St. Jöris as well as with Aachen and Alsdorf.

The next motorway connections are Eschweiler-West on the A 4 and - somewhat further away - Broichweiden on the A 44 . Röhe lies along the B 264 .

The nearest links to the rail network are the Euregiobahn -Haltepunkt Eschweiler West at Valley Railway line and Eschweiler Hbf at the Cologne-Aachen high-speed railway .

In 2007 Franz Surges dedicated a composition to his long-standing place of creativity Röhe and named it the Röher Messe .