The title of this article is ambiguous. Further meanings are listed under Quickborn (disambiguation) .

Quickborn is a town in the Pinneberg district in Schleswig-Holstein (Germany).

The city of Quickborn is located about 20 kilometers northwest of Hamburg, on the eastern edge of the Pinneberg district , which is also the largest municipality in terms of area. The city is located on the federal highway 7 between Hamburg and Neumünster . Quickborn is integrated into the transport network of the Hamburg Transport Association via the Hamburg-Altona-Neumünster railway line of the AKN suburban railway and bus lines . To the northwest of Quickborn is the Himmelmoor , the largest raised bog in Schleswig-Holstein (approx. 605 hectares). It has been used for peat extraction for a long time . For this purpose, a narrow-gauge railway was built through the moor. South of the city is the 110 hectare Holmmoor nature reserve . Quickborn is divided into three districts. In addition to the town center, there is the more village-like Quickborn-Renzel and Quickborn-Heide , which mainly consists of single-family housing estates and an important industrial area. 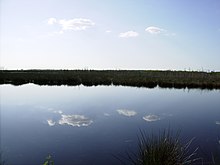 The annual precipitation is 836 mm and is therefore rather high as it falls in the upper third of the values ​​recorded in Germany. Lower values ​​are registered at 70% of the measuring stations of the German Weather Service . The driest month is February, with most precipitation falling in July, which is 1.9 times that of February. The rainfall varies moderately. Lower seasonal fluctuations are recorded at 63% of the measuring stations. 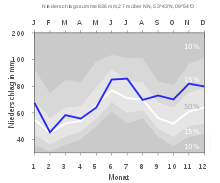 According to the Schleswig-Holstein State Development Principles Act, Quickborn has been the outskirts of the city since January 1, 1974, with partial functions of a sub-center. The city is also the focus of development on the Hamburg - Kaltenkirchen development axis in accordance with the resolutions of the Joint State Planning Council Hamburg-Schleswig-Holstein. The law obliges the city of Quickborn to perform supply functions for the area of ​​integration assigned to it - that is, the communities of Ellerau , Hasloh and Bilsen . The city of Quickborn fulfills this task by maintaining facilities of central importance (e.g. city library, medical center, open-air swimming pool, schools) and ensuring the supply of electricity, gas and water.

Quickborn was first mentioned on January 25, 1323. Church buildings have been documented since 1588, and since 1809 one of the few classicist churches in Schleswig-Holstein in Quickborn has stood at the center of it, the Marienkirche .

In the late morning of May 4, 1945, British soldiers occupied the place. 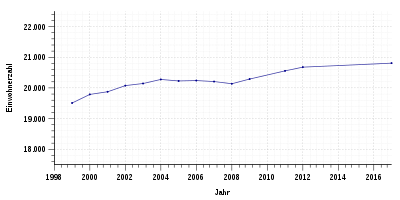 The blazon reads: "In red on a silver fountain post that grows out of the middle of a rectangular, bricked silver fountain basin and sends a stream of water in an arch into the basin, a seated golden owl in front view, accompanied by two silver sea leaves."

The central figure of the fountain in the coat of arms of the municipality of Quickborn is the "talking" symbol for the place name. This namely means "living spring" or "rapidly gushing spring". The fountain in the coat of arms refers to the artificially created "Born". The place, first mentioned in 1369, was located on one of the main trading routes, the Heerweg or Ochsenweg. This artery was of particular importance because for centuries herds of cattle were driven from Jutland to Hamburg on it. At the “Uhlenkrog” tavern in Quickborn, people and animals rested on their way through. The owl is in the coat of arms to commemorate this inn, which made the place famous beyond its borders. The two sheets of the lake represent the two large bodies of water in the municipality, the “Groten See” and the “Lütten See”. The colors predominantly used in the coat of arms are red and silver to emphasize the affiliation to Holstein.

The coat of arms was designed by the Brunsbüttel heraldist Willy "Horsa" Lippert .

Description: "In the middle of a white flag cloth bordered by a red stripe at the top and bottom, the city coat of arms, slightly shifted towards the pole."

The Himmelmoor peat railway is one of the last regularly running peat railway in Schleswig-Holstein. In the summer months, tours are offered for visitors.

The potter Irene Czechne has been based here with her own pottery workshop in the oldest building in town, a thatched house from 1788.

A former military service provider has built a private warning service museum since 1998.

Due to the close proximity to Hamburg, many residents commute to the Hanseatic city and find their jobs there. In Quickborn and its districts, there is little agriculture, but also handicrafts, trade and service companies. In recent years, the city has also succeeded in locating large and well-known companies in the Halenberg industrial park, located directly on the BAB 7:

The city of Quickborn takes on important supply functions for the surrounding communities. In order to make the city center more attractive and to keep purchasing power in place, the area around the train station was redesigned.

Eulenstadt is also used as an epithet for Quickborn . The reason: the owl is in the Quickborn coat of arms . Every year after the summer holidays there is an owl and rifle festival .

Both the plot of Mik Berger's novel Growing - The Seventh Day and the German-language novels about the time-traveling Christoph ("Lost in History") are set in Quickborn and the surrounding area.

Municipalities in the Pinneberg district