Fruits made from marzipan

Marzipan ( that or that ) is a confectionery made from ground almonds , sugar and - depending on its origin - added flavorings . The mass made from blanched and peeled almonds and sugar is called marzipan raw mass ; the ratio of raw mass and further added sugar determines the quality of the marzipan. The Lübeck marzipan , the Mazapán de Toledo from Toledo ( Spain ) and the Königsberg marzipan are world-famous .

The origin of the word marzipan is still controversial today. What is certain is that the word was borrowed from the Italian marzapane in the 16th century . There have been and still are numerous speculations and hypotheses about further etymology, including derivations from the Latin Marci panis ("Markusbrot"), the Persian marzbān or märzäpan (" Margrave " - see also the Arabic proper names Mortaza ) or the Greek maza or massa ( "Flour porridge"). In Spain , the vernacular points to the sight of the basic mass for making Turron de Jijona and Mazapán as Massa de Pan , i.e. a bread dough.

According to a theory published in 1904, marzapane is derived from the Venetian matapan , a Venetian coin that was first minted in 1193. Its name is said to be derived from the Arabic mautaban after the verb wataba ("to sit still"), which means "one who does not leave his place". At the time of the Crusades, this is said to have been the mockery of a king who sat idly on his throne and did not fight his enemies, and also for a Byzantine coin that showed a figure of Christ sitting on the throne on one side . This theory is based on the post-classical Latin word marzapanus , which has only been handed down in a single Syrian source and denotes a tithe tax . On the island of Cyprus it was said to have specifically referred to a box that contained the tenth part of a Malters (old grain measure). In the 14th century, the name was no longer used for the box, but for the contents, marzipan. For phonetic reasons, however, this theory is problematic, and the change in meaning appears to be quite unlikely.

According to another theory, marzapane is ultimately derived from the Burmese city ​​of Martaban , which was and is known for the ceramic pots made there, in which various spices and sweets were stored and sold. In Persian, Arabic and Urdu , the toponym martaban became the term for jugs and in the late Middle Ages it was also borrowed from various Romance languages with this and similar meanings ; a transfer of meaning from the vessel to the contents could thus be considered as an explanation for the name of the candy.

Cultural historians largely agree that marzipan has its origins in the Orient , even if a local legend is said to have originated in Lübeck after 1407 . This “bread” is said to have been invented there after a famine when there was only sugar and almonds in the city. The same is reported from Königsberg in 1409. The legend is not plausible because almonds and sugar were very valuable in the Middle Ages and could have been exchanged for larger quantities of bread or fish at any time.

Marzipan was probably first made in Persia , today's Iran . It came to Europe with the Arabs in the Middle Ages , through Spain, where it actually only became popular. The "Mazapán de Toledo" is still one of the most famous in the world today. In Venice it was mentioned as Marzapane in the 13th century. In the 14th century, marzipan was very popular as a confectionery among the European nobility . It was initially made by pharmacists, like other confectionery. During this time, the sweet dough made from almonds, sugar and rose water was sold as a medicine against constipation, flatulence and as a sexual enhancer.

At the time of Baroque discovered confectioner marzipan as modeling for artistic showpieces. In 1514 the city of Venice banned the gilding of marzipan as an exaggerated luxury. According to Merck's product lexicon from 1920, the name marzipan can be found in Lübeck guild rolls around 1530. “When beet sugar production provided the corresponding raw material basis in the first half of the 19th century, marzipan began to become bourgeois. The almonds were delivered from overseas, they were processed fresh, and so the Lübeck and Königsberg marzipan were famous as early as 1820 because the confectioners used the convenient location in the port cities. "

Marzipan pigs are given away as a lucky charm

In 1806 two confectioners independently founded the first marzipan factories in German-speaking countries. In Reval (Estonian Tallinn / Estonia) the Swiss confectioner Lorenz Caviezel and in Lübeck Johann Georg Niederegger . Today there is disagreement between Lübeck and Tallinn as to who exactly the invention of marzipan goes back to. Since both cities were members of the Hanseatic League and there was a regular exchange of craftsmen and merchants, the ultimate origin will probably no longer be exactly clear.

In Franconian cities like Nuremberg in the 17th and 18th centuries, marzipan was given for Christmas in models made of wood, tin or clay in order to obtain shapes and figures. Often there were biblical motifs, but also coats of arms, later farmers, craftsmen, hearts or diamonds. The Nuremberg patricians had their family coats of arms made from marzipan, which they gave away to friends.

The production of ready-to-sell marzipan from marzipan raw mass is carried out according to German food law by kneading with powdered sugar in a ratio of maximum 1: 1 (quality level 50/50). The lower the sugar content, the higher the quality of marzipan. The enzyme invertase is often incorporated here. This improves the freshness by breaking down the beet sugar to invert sugar .

In addition to German marzipan, French marzipan (le massepain), which is produced a little differently, also plays an important role internationally. In France, sugar syrup is used for production , which is heated together with crushed almonds until a viscous mass is formed. The result is a finer marzipan mixture, lighter in color and less flavorful.

Marzipan is offered in many forms and as an ingredient in many products, such as marzipan fruits, marzipan bread, Mozart balls and dominoes . In the bakery and pastry shop you will find a wide variety of items such as almond croissants, marzipan rolls or pralines with different fillings. Decorated cakes are very popular on special occasions and are covered with thin marzipan and decorated with marzipan fruits, flowers or figures.

The aroma of marzipan results for the most part from the aromas of the almonds used or their roast aromas. Benzaldehyde is an important component of the aroma 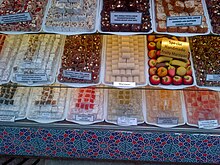 Turkish marzipan in the shop window of Caferzade , Istanbul

Marzipan raw mass consists of two parts of ground almonds and one part of sugar, which are heated while stirring (technically: "roasted") in order to reduce the water content.

The (optional) addition of invert sugar syrup before roasting causes a slight caramelization . Rose water can be added to round off the taste. The exact composition, the proportion of sweet and bitter almonds , the sugar content and the additives vary from manufacturer to manufacturer and are usually a trade secret.

The "Guiding principles for oil seeds and masses and confectionery made from them" of the German Food Book reflect the general public opinion of the composition of marzipan raw mass . Accordingly, marzipan is made from blanched / peeled almonds and meets the following requirements.

There are the following commercial types for marzipan paste: 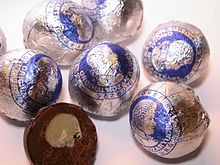