The title of this article is ambiguous. Further meanings are listed under sorbitol (disambiguation) .

Sorbitol [ zɔrbiːt ] ( of sorbitol, and the sorbitol , glucitol or hexanehexol ) is one of the alditols (sugar alcohols), and found in many industrially produced foods ( food additive E420) as a sugar substitute , carrier and humectant use. Sorbitol is the reduced polyol form of the hexoses glucose , fructose and sorbose and can be produced from these by catalytic or electrochemical hydrogenation . 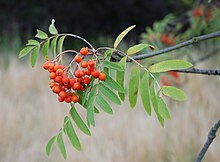 Originally, sorbitol was extracted from the fruits of the mountain ash (rowan, Sorbus aucuparia ), which contain up to 12% sorbitol. But it also occurs in many other fruits and especially in pome fruit varieties . Pears , plums , apples , apricots and peaches are worth mentioning with regard to their high proportion of sorbitol . In contrast, berry and citrus fruits as well as pineapples and grapes contain very little or no sorbitol.

The industrial production takes place from glucose (grape sugar), which is obtained from corn and wheat starch; the glucose is then converted to glucitol by catalytic hydrogenation . As with all products that are produced via starch saccharification in Europe, there are no genetically engineered products on the market for sorbitol, although genetically modified organisms could be used to manufacture sorbitol .

Sorbitol provides 10 kJ / g (2.4 kcal / g) less energy ( physiological calorific value ) than household sugar ( sucrose ) with 17 kJ / g (4.1 kcal / g). Its sweetness corresponds to about 40-60% compared to sucrose. In order to achieve the same sweetness in the food, accordingly more sorbitol is required so that the lower calorific value of the sorbitol is more than compensated. No insulin is required for metabolism in the body . Therefore, sorbitol is suitable for sweetening diabetic foods and is used in these dietetic foods in Germany and Austria.

Sorbitol is also used as a humectant in food production because it has hygroscopic properties and thus protects food (e.g. chewing gum, gingerbread, biscuits, chocolate and praline fillings), cosmetics and toothpastes from drying out.

Since sorbitol is only slightly broken down in the mouth, it is only slightly cariogenic . Sorbitol is a component of most of the toothpastes on the market. It is approved in the EU as a food additive with the number E 420, with the exception of beverages, as an additive for almost all foods in any high amount, although ingested amounts of more than 50 g / day can lead to diarrhea , gas and abdominal pain . Every food that contains more than 10% sorbitol or other polyols must therefore also have the wording: "... can have a laxative effect if consumed in excess".

Some water-based lubricants and massage gels contain sorbitol instead of glycerin.

The esterification of sorbitol with nitrating acid produces nitrosorbitol , a commercial explosive similar to glycerol trinitrate .

Furthermore, sorbitol serves as an intermediate product in the synthesis of ascorbic acid (vitamin C) from D- glucose (grape sugar) according to Reichstein , for which it is oxidized to the corresponding ketose , L - sorbose , as the next intermediate product.

Symptoms of intolerance may include a. Diarrhea , meteorism , nausea, or stomach pain. Intolerance is determined by an H 2 exhalation test, which is used to diagnose carbohydrate malassimilation (this also includes lactose and fructose intolerance). If a sorbitol intolerance is diagnosed, products that contain sorbitol as a sugar substitute should be avoided. Particular caution is required with diabetic foods and diet / light products. It is also important to ensure that almost all conventional chewing gum and lozenges contain sorbitol. Also found in many native types of fruit, e.g. B. peach (0.9 g / 100 g), apricot (0.82 g / 100 g) or plum (1.4 g / 100 g) a not inconsiderable amount of sorbitol. In dried fruit, the concentration is even higher due to the loss of water; for example, the concentration in dried apricots is a good five times as high (4.6 g / 100 g) than in fresh fruits.

From about 5 grams of sorbitol intake per day, gas and abdominal pain can occur. Larger amounts of around 20 grams per day may cause diarrhea.

People with the rare hereditary (inherited) fructose intolerance are also not allowed to consume sorbitol, as it is metabolized to fructose .

In the organism, sorbitol is an intermediate stage of the polyol pathway that occurs outside the liver and can be converted to both glucose and fructose . In addition to the breakdown of sorbitol supplied with food, this route is followed in order to synthesize fructose from glucose, especially in the vesicle gland to nourish the sperm. The enzyme aldose reductase converts glucose into sorbitol using an NADPH / H + , the enzyme sorbitol dehydrogenase oxidizes sorbitol to fructose, this time gaining one NADH / H + .

The metabolism of sorbitol plays a role in the development of some late effects of diabetes mellitus . If the supply of glucose is unphysiologically high, the polyol route is used, the balance of which is on the side of sorbitol and fructose. Since fructose is practically only broken down in the liver and sorbitol and fructose cannot leave the cells, they accumulate and shift the osmotic balance of the cell, which ultimately leads to cell swelling. In particular, the emergence of cataract is attributed to this mechanism, but he also plays in diabetic microangiopathy and neuropathy a role.

In high doses, sorbitol also acts as an osmotic diuretic due to its water attraction . The same mechanism of action requires its use as an enema .