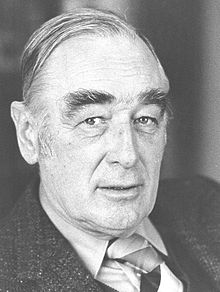 After graduating from high school in Chur (where the dialectologist Manfred Szadrowsky was one of his teachers), Paul Zinsli studied German , art history and Germanic antiquity at the University of Zurich from 1926 to 1934 , especially with Albert Bachmann (or after his death with Wilhelm Wiget ), Emil Ermatinger , Konrad Escher , Hans Lehmann and Heinrich Wölfflin . He received his doctorate in 1934 with the dissertation Grund und Grat. The structure of the mountain world in the linguistic terms of the Swiss German Alpine mouth species with Otto Gröger .

Paul Zinsli in his second form of expression: painting

From 1936 to 1946 he was a teacher at the municipal high school in Biel . In 1938 he married Elisabeth Färber; a son and a daughter were born to them. From 1943 he worked in the Cantonal Nomenclature Commission in Bern. In 1944 he succeeded Heinrich Baumgartner as a lecturer at the teaching college of the University of Bern . In 1946 he was appointed associate professor there, and in 1951 - also as successor to Baumgartner and Walter Henzen , who changed the chair after only one year - to professor of language, literature and folklore in German-speaking Switzerland. He retired in 1971.

The main focus of his research activities was name research - especially the lexicographical recording of place and field names in the canton of Bern and Upper Valais - and research into the Walsers . Zinsli founded the place name book of the canton of Bern (developed and published by the Research Center for onomastics at the University of Bern) and worked on the language atlas of German-speaking Switzerland . He has also reissued the works and letters of the Swiss reformer Niklaus Manuel .