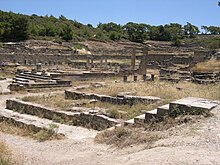 Kamiros (or Kameiros ) was, along with Ialysos (or Ialissos ) and Lindos, one of the three cities of ancient Rhodes . An extensive excavation field on the west coast of the island has remained of the city, which is a vivid example of an ancient (Hellenistic) city complex.

Around 1000 BC In the course of the "Ionian migration", Kamiros was founded by Doric Greeks. In the city lived in the 6th century BC. The epic poet Peisander . After a severe earthquake, the city, which lost much of its importance after the founding of Rhodes City , was rebuilt completely and according to plan in the Hellenistic period. In 139 AD, Kamiros was destroyed again by an earthquake and apparently not rebuilt; Ceramic finds and remains of an early Christian church show, however, that the place was only finally abandoned in the 4th century.

The city was not fortified. There is a Doric double-sided temple , a courtyard with a fountain, residential houses with a peristyle , at the highest point a Hellenistic stoa with originally a double row of columns and remains of a Doric ring hall temple of Athena . Below the stoa there is a cistern with a volume of about 600 m³ (17.4 m × 10.2 m and 3.2 m deep), which was probably built in the 6th century BC. Was built. Clay pipes for the water supply are still visible in the residential area.