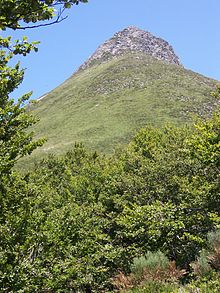 Phonolite ( Greek φωνή ‚sound ' , λίθος ‚ stone' , in English Klingstein due to the bright sound when struck) is a volcanic rock of greenish to gray color, which mainly contains alkali feldspar and feldspar representatives as light constituents ( felsic minerals ) , while quartz completely absent and plagioclase makes up a maximum of 10% of the existing feldspars. In the route iron diagram , phonolite is found on the left edge of the lower triangle. With an increasing proportion of plagioclase (between 10% and 50% of the existing feldspars) the rock is called tephritic phonolite . The structure is often porphyry , with alkali feldspar and foid minerals appearing as sprinkles in a dense, fine-grained matrix. A variety that contains a lot of rock glass in its base mass is called kenyite . Phonolite belongs to the group of alkaline stones .

The color of these rocks is greenish to gray. They are fine to coarse-grained and in the uniformly colored base there are cracks. They have a porphyry structure. In the quarry, the rock is mostly separated in flat form.

The main components are high-temperature alkali feldspar ( sanidine ), one or more minerals from the group of foids and, in small proportions (0 to 10 percent by volume ), plagioclase . The most common foid mineral is nepheline (Phonolith sensu stricto), but leucite , sodalite , Haüyn and other rarer foids can also occur in considerable quantities. Aegirine , aegirine-augite , alkali amphibole , olivine ( fayalite ), melanite and biotite occur as mafic minerals . Titanite and apatite are common side effects and accessory minerals, while zirconium , magnetite and perovskite are somewhat rarer . Phonolites with abundant wollastonite are also known . Phonolite often contains secondary minerals from the group of zeolites , for example natrolite or chabazite . In the classification chart of Streckeisen Phonolith is in the field 11. With increasing Plagioklasgehalt he goes into the phonolite tephrite , with increasing Foidgehalt in the phonolite foidite over. The deep rock equivalent is the foidsyenite .

The Hohentwiel im Hegau, a volcanic vent made of phonolite exposed by erosion

Phonolite mining near Bötzingen in the Kaiserstuhl

Sculpture from Ettringer Tuff from the Eifel

Lithophone made from phonolite in the Schellerhau Botanical Garden

Phonolite is a common volcanic rock and occurs worldwide, associated with other alkaline rocks such as tephrite, foidite, melilithite and also carbonatite . Like this, phonolite is a typical product of intraplate volcanism . Phonolithic magma is often brought to the surface of the earth by explosive volcanism and forms pyroclastic deposits, lava flows , domes and near-surface solidified dikes and intrusions .

Occurrences in Europe are, for example, in the Zittau Mountains ( Lausche ), ( Breiteberg ), in the Ore Mountains ( Maar von Hammerunterwiesenthal ), in the Eifel ( Laacher-See-Vulkan , Schellkopf bei Brenk ) in the Rhön ( Heiliger Hauk ), in the Kaiserstuhl ( e.g. near Bötzingen), in Hegau and in the volcanic central massif in France. Other well-known occurrences are the Devils Tower in Wyoming, USA, in the area of ​​the East African Rift Valley , Mount Erebus in Antarctica and on the Canary Islands .

The phonolites often have local names, for example Viterbite in Umbria , Selbergite in the Eifel, Sommait on Vesuvius near Naples in Italy and Katzenbuckelite in the Odenwald .

Phonolite is widely used as gravel material and natural brick, and also as facade panels. The phonolite tuff , which is formed from pyroclastic deposits, is used like lightweight building blocks due to its porous structure. It can be easily shaped and sawed and is therefore also used for sculpture work. Zeolithized phonolites with pozzolana properties are mined worldwide as an aggregate for cement and concrete production. In Germany, trass is made from Römertuff in the Eifel , which is mixed with special mortars with hydraulic properties. The phonolite from Bötzingen is also processed into fango .