Bötzingen is located on the southeast side of the Kaiserstuhl, about 15 km west of Freiburg im Breisgau . Neighboring communities of Bötzingens are from the north clockwise Eichstetten am Kaiserstuhl , March , Gottenheim , Ihringen , Vogtsburg im Kaiserstuhl (all districts of Breisgau-Hochschwarzwald).

Bötzingen was first mentioned in a document in 769 on the occasion of a donation to the Lorsch Monastery in the Lorsch Codex . An Odilrat donated agricultural facilities including vineyards "in Betzinger marca" (in the district of Bötzingen).

Oberschaffhausen first appeared in the 12th century when Pope Eugene III. confirmed its possessions to the St. Ulrich monastery in the Black Forest in 1143.

In 1838 the independent villages of Bötzingen and Oberschaffhausen merged to form the municipality of Bötzingen.

The community is part of the Kaiserstuhl-Tuniberg administrative community based in Bötzingen.

In July 2011 Dieter Schneckenburger was re-elected for a second term. 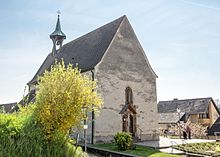 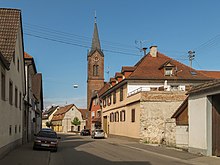 Bötzinger village and wine festival (every two years on the 2nd weekend in September in even years).

Currently, around 305 hectares of land are used for wine-growing in the municipality, with grapes for white wines being mainly grown.

Bötzingen is close to the federal motorway 5 (Karlsruhe – Basel). There is also a good S-Bahn connection with the Kaiserstuhlbahn , which serves the two stops Bötzingen and Bötzingen Mühle every half hour on weekdays and the city center of Freiburg can be reached in around 15 minutes. The Kaiserstuhlbahn will be fully electrified by 2018 as part of the cooperation agreement of March 11, 2009 between Regio-Verbund GmbH (RVG) and the Baden-Württemberg local transport company (NVBW).

Cities and municipalities in the Breisgau-Hochschwarzwald district