This article deals with the municipality of Merzhausen in Baden-Württemberg . For further meanings, see Merzhausen (disambiguation) .

Merzhausen is the smallest municipality in the district with the highest population density, which is also higher than that of Freiburg.

The community consists of the village of Merzhausen and the Jesuit Castle .

Merzhausen was first mentioned in 786 when the local landowner Heimo gave away goods to the St. Gallen Abbey. During the 14th century the place came under Habsburg-Austrian sovereignty. After various Freiburg noble families had owned the place as a manor, the Freiburg Jesuit monastery acquired it in 1635 . After the order was abolished in 1773, it passed to the Schnewlin Bernlapp von Bollschweil family and, after their expiry in 1838, to the Schauenburg family . After the Austrian sovereignty was transferred to the Habsburg branch line Austria-Este in 1803 , the place and the entire Breisgau fell to the newly established Grand Duchy of Baden in 1806 . 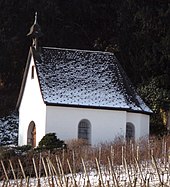 Merzhausen remained Roman Catholic even after the Reformation . The parish church is dedicated to Saint Gall . The parish belongs to the pastoral care unit Hexental in the dean's office in Freiburg .

In 1980/81 the Schoenstatt Chapel was built on the northern slope of Schönberg, below the Jesuit Palace . The foundation stone, a stone from the tower of the minster , was blessed during the Freiburg Catholic Day in 1978. In 1981 the chapel was consecrated by the then Archbishop Oskar Saier .

Christian Ante has been mayor of the Merzhausen community since July 1, 2009.

The Merzhauser coat of arms shows on a silver (white) background a red armored black bear turned to the right, symbol for belonging to the St. Gallen monastery, holding the coat of arms of the Schnewlin family, horizontally divided in gold and green, in front of him.

Merzhausen has had a partnership with Dardilly in the Rhône ( France ) department since 1982.

In 2005, the unrestricted purchasing power per inhabitant was € 20,871; There are only forty municipalities in Baden-Württemberg that have a higher purchasing power. In addition to a grocery discounter in the north and a full-range supplier in the south, the community has a few smaller retail stores on Hexentalstrasse and in the center of the village. Every Saturday there is a weekly market on the market square in front of Forum Merzhausen from 8 a.m. to 1 p.m.

In 2020, there will still be two of the four wineries that were formerly four, which cultivate the Müller-Thurgau, Gutedel, Spät-, Grau- and Weißburgunder as well as Riesling grapes on approx. One of them has been offering solidarity viticulture since 2020 . Seven catering establishments, two of which have guest rooms, offer their services. There is even a brewery on site.

In addition to the Moser construction company, there are predominantly small and medium-sized businesses in the trade, craft and service sectors as well as free professions in Merzhausen.

The Hexental administrative community publishes the Hexentäler Official Journal every fortnight , which is distributed free of charge to all households. In addition, a free information brochure about the Verbandsgemeinden Hexental is published every two years by A + K Verlag.

In addition to various kindergartens and crèches, Merzhausen has a primary school (Hexentalschule) and various private schools. There is a Catholic public library and two senior residences.

The school building, which until 2011 also contained a secondary school, was on private land. In recognition of his donation, the municipality named the building after Alois Rapp in 2011. The rooms of the secondary school that became vacant were occupied by local associations.

There is also a post office and a recycling center in town.

Merzhausen is one of the few communities without its own fire brigade . Instead, the Freiburg fire brigade takes on the relevant tasks. Merzhauser citizens can work as volunteer firefighters in the Lower City Department of the Freiburg Fire Brigade. 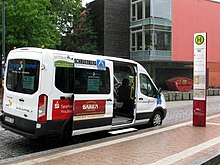 The citizen bus in Freiburg-Vauban

The headquarters for teaching media on the Internet is located in Merzhausen .

The L122 connects Merzhausen with the city of Freiburg and the communities in Hexental.

The bus line 7208 of the Südbadenbus GmbH between Bad Krozingen and Freiburg Hauptbahnhof travels through Hexental and connects Merzhausen in Freiburg-Vauban to the Freiburg light rail network. It is supplemented by a citizens' bus on Sunday afternoons . Merzhausen belongs to the Freiburg tariff zone of the Freiburg Regional Transport Association . Since August 2020 there has been a charging station for electric vehicles opposite the town hall with two charging points with an output of 22 kilowatts.

The Forum Merzhausen at night

The former Jesuit castle from 1666 was given its present shape in 1727 and houses a restaurant next to the Freiburg foundation winery. The old Merzhausen Castle is in the center of the village .

The Forum Merzhausen (official spelling FORUM | Merzhausen) in the center of the village is a culture and community center and was completed in November 2012. The glass walkway encloses a small hall with approx. 120 and a separate large hall with 457 seats. The building, created by hotz + architekten in collaboration with becker + haindl, Stuttgart, Freiburg, was awarded the Hugo Häring award in 2014.

The community pool, which is run by citizens (non-profit), has an indoor pool with a sauna, a sunbathing area and an outdoor pool for small children, as well as a café.

In the center of the village there is a sports hall with a beach volleyball facility, as well as a water treading area on the renatured village stream. In the south on the border to Au are the sports grounds of VfR Merzhausen , with over 3500 members (as of 2020) one of the largest sports clubs in southern Baden, the courts of the Hexental tennis club and the club for family dogs and dog sports in DVG eV Merzhausen .

Merzhausen is the starting point of the historic beggar's path , an old route connection from Freiburg via Staufen im Breisgau and Sulzburg to Badenweiler , which is now designated as a hiking trail .

The fact that long- eared owls successfully brooding were observed and documented in a garden on Schlossweg in 2015 also speaks for the village's closeness to nature .

In the forum Merzhausen u. a. Concerts and exhibitions like Merzhausen take place in December . In summer there is a Dorfhock and on the Saturday before the 1st Advent there is a Christmas market on the market square.

Cities and municipalities in the Breisgau-Hochschwarzwald district