Viljandi (German: Fellin ) is a Hanseatic city in Estonia and the capital of Viljandi County in the south of the country. With almost 18,000 inhabitants, it is the sixth largest city in Estonia.

The oldest settlement finds on Lake Viljandi go back to the fifth millennium BC. A castle was built by the Estonians in the Viking Age at the latest . The first written mention was made in 1154 by the geographer Al-Idrisi .

In the 12th century, the first permanent settlement around the fortress Viljandi began, which also became the economic center of the later Sakala district .

After the struggle for freedom in the early 13th century, Viljandi was conquered by the German Brotherhood of the Sword . In 1224, instead of the wooden fortifications, construction began on a mighty order castle , which was at times the largest in the Baltic region . It was continuously expanded and modernized in the following 200 years.

During the Livonian War in 1560 , the town and the castle were partially destroyed. During the Polish-Russian War at the beginning of the 17th century, the facility was largely destroyed. Today only the castle mountains with partially intact walls are evidence of the splendor of that time.

During the Swedish rule in the 17th century, Fellin's town charter was revoked. This situation lasted until 1783, when a reform made Catherine the Second Fellin the capital of Fellin County in Livonia . With the growing economic and political influence, the population of Viljandi increased again. To this day, Viljandi is a district capital and an important center in southern Estonia with various cultural events.

After the elections on October 15, 2017, the Viljandis City Council consists of 27 members. They are distributed among the individual parties and groups as follows (column +/−: difference to the previous election in October 2013): 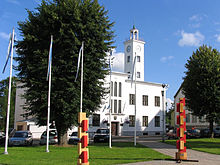 Pro Patria and Res Publica Union, the Estonian Reform Party and the Center Party will form a coalition for the period 2017–2021.

Alongside Pärnu and Tartu, Viljandi is an important business location in the region . The following companies are based in Viljandi:

Viljandi is the venue of the internationally known, annual “ Viljandi Folk Music Festival ”.

The Ugala Theater in Viljandi has existed since 1920. There is also a puppet theater for children, a cinema, a bowling alley, a sports school with a rowing club, a music school and a hobby school for leisure activities.

The Tulevik Viljandi club plays in the second highest league, the highest Estonian football league. The club plays its home games at the Viljandi Linnastaadion .

There is a train connection from Viljandi to Tallinn . Otherwise you can reach all cities and towns in Estonia from the bus station (Viljandi Bussijaam) . From there, around 50 bus routes leave several times a day. There is also a bus network with 8 lines within the city of Viljandi and its suburbs.