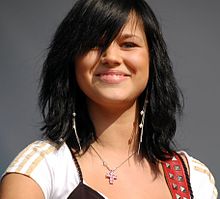 Kivilaan studied bass, piano and saxophone for four years and took part in singing competitions. She worked as a model, but replaced Vanilla Ninja on August 7, 2004, Maarja Kivi , who had left the band. With Vanilla Ninja Kivilaan took part in the Eurovision Song Contest 2005, where they took eighth place, competing for Switzerland. The final saw 150 million people.

In January 2006 she left the band again. The production team Fabian König and Ollie Stan (03 | Studio) then wrote several songs for Kivilaan. In addition, the manager Rainer Moslener ( No Angels and Christina Stürmer ) has been at her side since May 2008 .

The debut single Home , which appeared in March 2008, missed the hit parades. The title Fallen , which entered the German single charts in summer 2008, was more successful . It was the pre-release from their first solo album, Now and Forever , which was released in late August.

After her debut album could not be placed in the charts, she withdrew from the public until further notice. Today she lives in Pratteln and works for a telecommunications company. In 2011 she ended her career as a musician. Kivilaan has no contact with the former band members.

She has two siblings.

Often times, August 4, 1987 was given as the date of birth so that she could bypass child labor protection. However, it was not prosecuted under criminal law, as there were only rumors among the fans until Switzerland participated in the ESC. In Estonia, however, their true year of birth, 1989, was always given.