The cascaded chain or Cascades ( English Cascade Range or Cascades ) is a mountain range of volcanic origin, is parallel to the west coast of North America runs. He belongs to the Pacific Ring of Fire .

The Cascade Range is a 1130-kilometer mountain range that stretches from British Columbia in the north to California in the south. In 1933, the US Geographic Board defined the valley south of Lassen Peak as the southern end of the cascades, which delimits it from the Sierra Nevada . The northern limit is controversial because the geographical name of the mountain range differs from the geological definition of the cascade volcanoes .

The Geographic Names Information System of the United States Geological Survey names Mount Meager as the northern limit, with which the cascade chain would extend around 150 km to Canada and include almost all of the cascade volcanoes. A demarcation on the Fraser River or the transition to the Thompson Plateau is widespread among mountaineers and in travel guides . In some sources, parts of the Coast Mountains north of the Fraser River with the Mount Garibaldi volcano are still counted as part of the Cascade Mountains. In Canadian maps, the part of the Cascade Range in British Columbia is also known as the Cascade Mountains .

In the US state of Washington the cascade chain is divided into three mountain ranges: the heavily glaciated North Cascades with Mount Baker and the North Cascades National Park , the Central Cascades and the South Cascades with Mount Adams , Mount Rainier and Mount St. Helens . However, this classification is not generally used, in many cases individual prominent peaks such as Mount Baker, smaller mountain ranges or individual passes or rivers are used to name a region. The North Cascades are less volcanic than the South Cascades or the High Cascades in Oregon and the landscape is more like the Coast Mountains in British Columbia.

South of the Columbia River , the Cascade Range runs parallel to the Oregon Coast Range . The Cascade Mountains in Oregon itself consists of two mountain ranges running in a north-south direction, the wider, older, more eroded and almost 1,800-meter-high Western Cascades and the dominant, snow-capped peaks of the younger, more eastern peaks of the High Cascades, which include Mount Hood , Mount Jefferson, and the Three Sisters .

The cascade chain continues as far as Northern California and ends south of Lassen Peak on California's long valley .

The highest cascade peak is Mount Rainier near Seattle at 4,392 meters. Hundreds of streams and rivers have their source in the rainy cascade range, including the Skagit River and the Willamette River on the west side and the Yakima River and the Deschutes River on the east side . The Columbia River is the only river to break the mountain range, dividing it into the Washington Cascade Range and the Oregon Cascade Range. Numerous streams and rivers are dammed to generate electricity, to supply drinking water or for artificial irrigation. The largest natural lake in the Cascade Range is Lake Chelan . 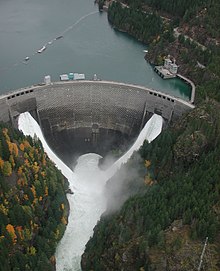 Ross Dam , a dam on the Skagit River

The most important volcanoes in the Cascade Mountains

Much of the Cascade Range in the United States is owned by national forests such as Mount Hood National Forest . The following national parks and national monuments are in the cascade chain (from north to south):

Volcanism and plate tectonics in the Cascade Range

The Cascade Range was formed when the North American plate collided with the Pacific plate 70 million years ago . In the subduction zone , several high mountains rose in a north-south direction, including the cascade chain.

The last volcanic activity resulted from the subduction of the Juan de Fuca Plate against the North American Plate. This subduction also leads to the formation of the Eastern High Cascades, which run from British Columbia to Northern California, in three phases:

The volcanoes were eroded by glaciation while they were growing. The oldest volcanoes in the High Cascades are most eroded by glaciers. Some like Three Fingered Jack and Mount Washington were largely eroded by erosion except for the hard chimneys and lava plugs. The more active volcanoes, such as Mount Rainier , Mount Adams , Mount Hood , Mount Jefferson and South Sister , retained their volcanic shape despite being glaciated by multiple eruptions. Ironically, one of the oldest volcanoes in the High Cascades , the 1.4 million year old Black Butte west of Sisters , is little eroded by glaciers because it lies in the rain and snow shadow of the Cascade Range and so little snow and ice is deposited and accumulated on it could.

Many of the volcanoes are not yet extinct and, like Mount Hood or Mount Rainier, can erupt again. The volcanoes mainly produce gas-rich, acidic and therefore tough lavas ( andesite , rhyolite or dacite ), which leads to explosive eruptions and pyroclastic flows . The last and best known volcanic eruption was the eruption of Mount St. Helens in 1980 .

The maritime climate of the Pacific Northwest also determines the climate in the Cascade Range. From the Pacific, humid and cool air comes into the interior of the country through westerly winds, which has to rise up the mountains and rains down as incline rain. On the west side of the cascade chain, the annual precipitation ranges from 1500 to 2500 mm, in some valleys running from east to west up to 3500 mm precipitation is reached. On the western side of the Oregon Cascade Range, nearly half of the rainfall falls in winter, around a quarter each in spring and fall, and very little during the summer months. In winter, the precipitation falls as snow, at lower altitudes around one to two meters of fresh snow falls annually, in locations between 1200 and 1600 m around 10 to 15 m annually. Mount Baker and Mount Rainier are among the regions with the highest snowfall in the United States; the record snowfall on Mount Rainier was over 28 m of fresh snow in the winter of 1971/72. More than 22 m of fresh snow has also been measured at Crater Lake. Due to this amount of snow, the mountains above 2400 m are covered with snow and ice all year round. At this height, fresh snow falls in September, from the end of October the snow line drops to 900 m and in winter to 450 to 600 m. Although the snowfall lasts into late spring, the highest snow depths are reached in early March. At the end of June or beginning of July, regions over 1500 m can still be covered with snow. In the rain shadow of the mountains, the annual rainfall on the east side of the cascade chain drops from 2330 mm at the 1206 m high Stampede Pass to 550 mm in the 585 m high Cle Elum. The seasonal differences in precipitation are not as pronounced as on the west side. The annual snowfall ranges from around 10 m on the peaks to around 2 meters at 600 m altitude.

The average temperatures in January are 4 ° C at lower altitudes to −1 ° C at an altitude of 1600 m. The lowest values ​​in valleys are as low as −34 ° C. In July, the average temperatures are between 21 ° C and 29 ° C, in the lower elevations in Oregon, values ​​of 32 ° C and maximum values ​​of up to 40 ° C are reached on up to 20 days in summer. Cooler mountain winds from the afternoon onwards lead to a rapid drop in temperature after sunset.

Yellow pine forest on the east side of the Cascade Range

The western side of the cascade chain, which is rich in precipitation, is covered with a dense coniferous forest, which can be divided into three successive vegetation zones:

On the east side of the cascade range, which has less precipitation, a light forest of yellow pine and coastal pine dominates . Douglas firs, West American hemlocks and rock mountain firs are added to higher, more humid locations, and West American junipers are added to lower, dry locations . In southwest Oregon and northern California there are also Colorado firs and silver firs , which are already transitioning to other eco-zones .

Above the tree line is the Alpine vegetation zone with mat and cushion plants.

The animal world consists of the species community that is common in coniferous forests in West America. Mammalian species include chipmunks , gold-coated ground squirrels , and Douglas squirrels . Larger mammals are elk , mule deer , bobcat , puma , black or grizzly bears . In the alpine area, ice-gray marmots and mountain goats live in the northern cascades and yellow-bellied marmots in the more southern cascades . More than 200 different bird species live in the Cascade Mountains. 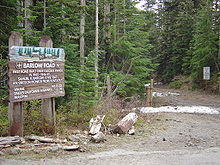 Indians lived in the Cascade area for thousands of years and developed myths and legends about the mountains. According to some of these stories, Mount Baker, Mount Jefferson, and Mount Shasta were used as refuge during a great flood. Other stories, like that of the Bridge of Gods, turned the high cascades into godlike leaders who waged war by throwing fire and stones at each other. Mount St. Helens, graceful in appearance before the 1980 eruption, was considered the young beauty that Mount Hood and Mount Adams fought for. The first name of the cascade chain comes from the Spanish navigator Manuel Quimper , who mentioned the mountains in 1790 as Sierra Nevada de San Antonio in his records. In the spring of 1792 sailed George Vancouver to Puget Sound down and gave the mountains their present English name. However, he only referred to the mountain range itself as the "eastern snow chain". In 1805, the Lewis and Clark Expedition crossed the cascades on the Columbia River, the expedition and its subsequent settlers encountered the Cascades Rapids in the Columbia River Gorge , an area of ​​waterfalls that is now under the reservoir , as the last obstacle of the Bonneville Dam . Within a short time, the peaks that rose above the falls were referred to as mountains by the cascades , which later became the short form of the Cascades (the first recorded use of this name can be found in 1826 in the Notes of the botanist David Douglas ). The Wilkes expedition named the mountains Cascade Range in 1841 , and military reports referred to the mountains as the Cascade Mountains . In 1845, the Barlow Road south of Mount Hood was the first land route through the cascades.

Volcanoes of the Cascade Range