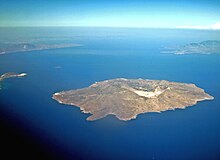 The Dodecanese island of Nisyros is located in the southeastern Aegean Sea about 17.5 km west of the Datça Peninsula in Asia Minor . The distance to the next larger island of Kos is about 16.5 km to the north, Tilos is about 17 km to the southeast. In the vicinity are some smaller uninhabited islands, counterclockwise from north to southwest Strongyli , Agios Andonios, Gyali, Pergousa, Pachia and Kandelioussa.

The approximately round island has a diameter of eight kilometers. The terrain on the west and south coast is relatively steep. Small bays and steep banks alternate in the south. The north and east coasts are interspersed with several small, flat sandy bays.

The center of the island is dominated by a caldera with a diameter of 3.8 km. The edge of the caldera reaches heights of over 250 m, the highest point is 588 m. The west and northwest of the caldera are occupied by five lava domes , of which the Profitis Ilias (Προφήτης Ηλίας) is the highest point on the island at 698 m. In the southeastern caldera, the Stefanos crater with a diameter of 300 m characterizes a 0.9 km² geothermal area with mud craters and fumaroles .

Outside the caldera, the Karaviotis lava dome (Καραβιώτης) with 539 m is the highest point in the southwest . 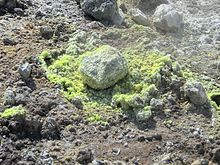 Nisyros is a purely volcanic island that is much younger than the neighboring Kos. Besides Santorin (1950), Milos (approx. 200 AD) and Methana (270 BC and 1700 AD), Nisyros is one of the active volcanic islands of the Cycladic Arc in Greece . The oldest lavas can be found in the northwest of the island, near Mandraki. They are under the sea formed basalt - pillow lava that have so far raised by tectonic activity that they lie on the ocean now. The submarine base of Nisyros consists of rocks from the Middle Ages (limestone). These rocks occur on the surface as the product of eruptions; partly they are metamorphically changed by contact with the magma ( skarn ). The overseas rocks of Nisyros are andesite to dacite lava flows alternating with pyroclastic ashes and slag of similar composition. Relatively late in the island's history, two massive Plinian eruptions of pumice occurred , as a result of which the central caldera that now dominates the center of Nisyros collapsed. Deposits of ashes and pumice from Nisyros are also found on the island of Tilos, southeast of Nisyros. The most recent magmatic surface activity was the penetration of the highly viscous Dacit domes in the western half of the caldera, which now form the highest peaks on the island. The exact age of these domes is unknown, but is believed to be in the tens of thousands of years. The current volcanic activity is limited to hot, sulfur-rich vapors in the Stefanos crater at the southern end of the caldera. The Polyvotis crater goes back to a historically transmitted steam explosion in the late Middle Ages. The last hydrothermal explosions were in 1871–1873 and 1887.

Nisyros has been intensely explored since 1980 and geophysically monitored since 1995 after significant changes in the temperature and composition of the exhaled gases occurred. At the same time, the island began to bulge in 1995, up to 14 cm, and increased microseismic activity was recorded, which peaked in 1998 and ended in early 1999. Between 1998 and 2000 the bottom sank again by 7 cm and afterwards (2000/2001) crevasses opened in the northwestern caldera floor. The observed bottom bulge was probably caused by increasing pore pressure in a near-surface hydrothermal system as a result of increased gas releases from a magma chamber at greater depths. In the further course the high seismic activity led to a higher permeability of tectonic faults and thus to a degassing and pressure reduction in the subsurface and the associated subsidence of the ground. The subsequent formation of crevices shows that near-surface tensions in the subsurface had not yet been completely relieved after 2000. Between 2003 and 2008, annual gravimetric measurement campaigns were carried out on Nisyros. The collected data showed a periodic signal which was traced back to mass fluctuations caused by the circulation of hydrothermal solutions in the subsurface. The recorded signal has steadily decreased in amplitude and frequency since 2003 until it fell back to background activity in 2008. The field studies have shown that gravimetric measurements in calderas make underground activity visible that can no longer be resolved with other measurement methods.

In the 19th and 20th centuries, sulfur was mined in the area of ​​the mud craters in the southwest of the caldera and shipped via a small port (near Agia Irini) on the south coast; In the 20th century, pumice was mined in the north of the island and shipped as building material via a charging station near Pali. Towards the end of the 20th century, efforts were made to use a geothermal borehole to generate energy, but this turned out to be impractical.

On June 21, 2008, the first volcanological museum in Greece was opened in the village of Nikia.

Due to volcanic activity and in particular phreatic eruptions, rare skarn rocks were brought to the surface together with pumice in some places (Avlaki, Lies-Strand) . These are limestones from the non-volcanic, sedimentary base on which Nisyros rises. These limestone rocks were chemically and structurally changed by contact metamorphosis at temperatures of approx. 600 to 800 ° C. In and on these granular, sandstone-like chunks are red-brown garnet ( grossular ), deep green pyroxene , white wollastonite , diopside and extremely rare are light bluish to green spinel crystals.

The municipality of Nisyros was left unchanged during the administrative reform of 2010. The three municipal districts were renamed local communities (Ez. Gr. Topiki kinotita ). The population figures come from the 2001 and 2011 censuses.

The main town Mandraki is on the north coast of the island. Above Mandraki is the Johanniterkastell with the cave monastery Panagia Spiliani, which was built in the 14th century on the site of an ancient predecessor . To the south-west lies the ancient acropolis Paliokastro with its basalt walls, one of the best preserved fortresses from the 4th century BC. The complex was reconstructed between 2003 and 2008 and is freely accessible to visitors. In the center of Mandraki, the Archaeological Museum shows finds that cover the period from the Neolithic to the post-Byzantine period.

About two kilometers east of Mandraki is the fishing village of Pali with about 239 inhabitants.

On the eastern edge of the crater at a height of around 250 m is the small village of Emborios, which has been renovated with EU support in recent years. The volcano observatory, inaugurated on June 22, 2008, is located there with a view of the crater basin.

The village of Nikia, which is about 400 m above sea level, is also built on the crater rim. The Nisyros Volcano Museum has been located there since 2008, with vivid material on volcanism (not only) on the island.

The main town of Mandraki has had a twinning relationship with the northern Cypriot village of Lapithos since 1996 .

The port of Mandraki

Nisyros can only be reached by ferries via Rhodes or Kos . Connections with Piraeus exist twice a week in the summer months and once a week in the winter months. Excursion boats from Kardamena on the south coast of Kos Island run daily during the summer months. Particularly in the winter months, the transport of people and goods is not guaranteed if the weather conditions are unfavorable.

Despite its rough topography with rapidly rising heights, the island has an adequately developed road network, almost every part of the island is easily accessible. The total length of the street and road network is almost 100 km, half is accounted for by rural roads . The island's main road, including the branches to the villages of Pali and Emborios, has a total length of 20 km, of which the distance from the port of Mandraki to the almost 400 m high village of Nikia is about 15 km. Initially, the road runs along the north coast and, shortly before Pali, turns south with many curves up to a saddle on the caldera. Only slightly uphill it continues on the outside of the caldera to Nikia. The proportion of side roads is 28 km, including to the abandoned fishing settlement Avlaki on the south coast.

The municipal bus runs several times a day and is initially geared towards the needs of school children and the local population, and is used as public transport in the summer months.

The connection to national and international air traffic takes place via the airports in Kos and Rhodes . There is a helicopter landing pad south above Mandraki for emergencies .

Nisyros is an arid island due to a lack of groundwater and low rainfall. The annual water requirement is around 100,000 m³. The pouring of the only source of drinking water in the east of the island at the Kyra Panagia monastery is insignificant. In the past, the problem was solved with cisterns for storing precipitation, and many households now have cisterns. Water transport by tankers from mainland Greece or from Rhodes causes high costs over the long term. In 1991, a plant for seawater desalination was built . The commissioning of a reverse osmosis system for seawater desalination with a daily capacity of 340 m³ led to an improvement in the situation .

Although the island of Nisyros has the potential of renewable energies to meet its own energy needs and those of the surrounding islands, electricity is generated from fossil fuels. The use of solar energy in the Southeast Aegean, one of the sunniest areas in Europe with more than 3000 hours of sunshine per year, does not matter. The development of the second largest geothermal deposit in Greece has so far failed due to reservations and resistance from the population. The first exploratory drilling from 1982 to 1983 by the Institute for Geological and Mining Research (IGME ΙΓΜΕ) took place under the leadership of the Greek state energy supplier DEI ( ΔΕΗ ) in the southern Lakki plain . The geothermal potential of the area is around 50  MW and would be sufficient to power neighboring islands such as Kos, Tilos, Kalymnos and Leros for ten years. In a referendum on May 11, 1997, the population decided against the use of geothermal energy. After new negotiations between the electricity supplier DEI and the municipality, a 5 MW geothermal power plant will be built and operated by the subsidiary PPC Renewables S.A. On the other hand, the reservations of the population could not be dispelled. Nisyros is currently powered by an underwater cable from the oil power station on Kos .

In Greek mythology, it is said that the sea god Poseidon defeated the giant Polybotes by throwing the island of Nisyros on him in the Gigantomachy , the great battle of the gods with the giants .