Mars Global Surveyor before the start

The launch of Mars Global Surveyor 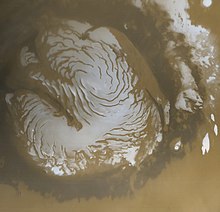 MGS image of the North Pole Cap of Mars

Mars Global Surveyor ( MGS ) was a spacecraft of NASA for exploration of the planet Mars from an orbit . It started on 7 November 1996 aboard a Delta II - launcher and started around March 1999 with the exploration of the Red Planet. On November 2, 2006, the probe was lost due to a mistake by ground staff.

The most important tasks of the mission lay in the acquisition of high-resolution photos for the measurement and mapping of the topography , in the investigation of the composition of the Martian rock , the role of water in the planetary history as well as in the investigation of the atmosphere or the climate and weather, the magnetic field and of the gravitational field . The orbiter was also used to relay the signals from some countries from the Martian surface to the earth .

The Mars Global Surveyor project was born with the goal of quickly developing an inexpensive Mars exploration mission to replace the failed Mars Observer . The end of the main mission was set for August 2001.

The alignment of the orbit through several maneuvers and the aerobraking process was then delayed by over a year due to a fault in the solar modules . MGS finally reached target orbit in March 1999.

Since reaching Mars' orbit, the probe has been taking photos of the entire surface in very high resolution. In some cases, details of less than two meters in size can be seen in the images. These recordings clearly exceeded the photos of the Viking Orbiters made in the 1970s . Only the images from the European Mars Express probe surpassed this. In total, MGS had sent over 240,000 images to Earth by October 2006.

The mission was particularly interesting for the scientific press because of the high-resolution photos of former river beds and lakes. They are interpreted as important indicators of the existence of liquid water on Mars. On December 6, 2006, NASA announced at a press conference that it had discovered clear evidence of running water on Mars, which had only formed there over the past seven years. The Mars Global Surveyor took a picture in September 2005 showing two gullies about one kilometer long. They have finger-like branches at the bottom that easily wind around small objects.

The probe also played an important role after the US Mars landers Spirit and Opportunity landed on January 4 and 25, 2004. Although both vehicles were also able to communicate directly with the Earth, the largest amounts of data were received from the surface via orbiters in the Mars orbit sent to save energy.

The probe had already exceeded its planned lifespan by far when the mission was extended by NASA in September 2006 for a further two years.

In addition, the face of Mars that was photographed from the orbiter of the Viking I spacecraft in 1976 was specifically observed . The new photos exposed it as a misshapen rock formation that resembled a face only because of the incidence of light and image errors. Mars Global Surveyor was the first space probe to specifically investigate the alleged traces of an extraterrestrial civilization.

On November 2, 2006 - shortly before the tenth anniversary of its launch - communication with Mars Global Surveyor (at that time the longest-serving Mars probe) was lost. Even their carrier signal was no longer received. After problems with one of the two solar cell arms, the probe was probably no longer correctly aligned to the sun and no longer received enough power to operate the on-board devices. According to NASA's mission control center, the Jet Propulsion Laboratory (JPL) in Pasadena, California, it had to be assumed that the probe was lost.

NASA and ESA then tried to locate the probe using the cameras on their Mars orbiters Mars Reconnaissance Orbiter and Mars Express . The attempts were terminated on January 28, 2007 without result.

On January 10, 2007, NASA set up an internal commission of inquiry to determine the reason for the sudden loss of contact.

On April 13, 2007, the Commission presented its preliminary report. According to this, a series of events already five months before the loss of contact (June 2006) led MGS to receive incorrect data for the probe alignment, which would later have fatal consequences: On November 2, 2006 the probe was routinely instructed to realign its solar panels. The probe gave several alarms, but then reported that it had stabilized. Then the ground station lost contact. The probe had rotated so that one of the two batteries was directly exposed to sunlight. This led to warming, which was interpreted by the on-board electronics as overcharging the batteries. Thereupon the charging by the solar cells was automatically switched off, which led to a complete discharge of both batteries within a few hours and thus at least had to damage them. In addition, since the radio antenna was misaligned, MGS could not report its condition to the ground station. The investigation report indicates that the routine procedures used by the ground crew were not effective in this case. In the future, more non-routine scenarios in the satellites' flight software should offer protection against overheating.

Missions in italics are active.