A solar flare is a structure of increased radiation within the Chromosphere the sun obtained by, magnetic energy is supplied.

Depending on the author and the age of the publications, the delimitations of the names vary. 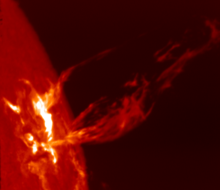 Course of a solar flare

The duration of the flares is proportional to the extent of the eruption area. The average service life is 10 to 90 minutes, with a slow decrease after a rapid increase in brightness . Flares occur in areas of the sun that also show sunspots and sun flares . With normal solar activity, 5 to 10 flares can be observed per day .

Larger flares can occupy up to 1 ‰ of the sun's surface , which is ten times the surface of the earth. They are observed in spectroheliograms of hydrogen and at the edge of the solar disk as a bulge of the chromosphere into the corona , mostly in connection with mass ejections.

Flares are logarithmically divided into classes A, B, C, M and X according to their X-ray energy. Within a class, the intensity is set with a value between 1 and 10 (including 1). If the value reaches 10, it is assigned to the next class; In class X, values ​​greater than 10 are also possible. The classification results from the flow of X-rays emanating from the sun, in the range from 0.1 to 0.8 nm (corresponds to 1.55 to 12.4 keV).

The largest solar flare observed to date occurred on November 4, 2003 with a classification of X45. That corresponds to 4500 µW / m².

An absorption spectrum of a flare area typically shows not only hydrogen but also helium and calcium . The areas emit more short-wave radiation in the ultraviolet and X-ray range as well as protons , electrons and ions . On earth, this causes disruption of the ionosphere with corresponding impairment of radio traffic .

The particles lead to magnetic storms when they enter the earth's atmosphere . From Ionosphärenstürmen is when slowly into the auroral zones penetrating particles which at night visible auroras cause and by strongly fluctuating electrical currents occur geomagnetic disturbances. In proton storms, the fast solar protons penetrate the polar caps , sometimes in mid-latitudes up to heights of 30 km, and increase the electron density and adsorption of short waves . 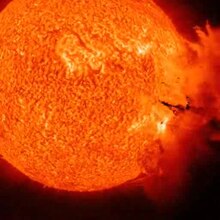 The formation of the flares can be traced back to electromagnetic processes within the sun. The sun consists of a plasma of negative electrons and positive ions, which in its outer zone is kept in constant motion by convection currents . Because of their lower mass, the electrons have a higher speed than the ions; an electric current flows which induces a magnetic field . In some cases, magnetic field hoses bulge outwards. If these loops touch while twisting, the magnetic field lines short-circuit and reconnection occurs . This is a physical phenomenon in which the structure of a magnetic field changes abruptly and large amounts of energy are released. It is believed to be responsible for the solar flare. Due to the opposite orientation of the magnetic field, the loop with the enclosed material is catapulted away.