The title of this article is ambiguous. Further meanings are listed under pulsar (disambiguation) . 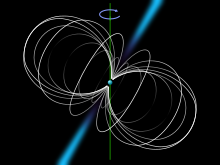 Schematic representation of a pulsar. The ball in the middle represents a neutron star, the curves the magnetic field lines and the laterally protruding light cones the direction of the outgoing radiation.

A pulsar (portmanteau of English. Pulsa ting source of r adio emission , "pulsating radio source") is a rapidly rotating neutron star . The axis of symmetry of its magnetic field deviates from the axis of rotation, which is why it emits synchrotron radiation along the dipole axis . If the earth lies in the radiation field, it receives regularly recurring signals like from a lighthouse. Pulsars emit mainly in the radio frequency range, sometimes up to or only in the X-ray range. Of the more than 1700 known sources, fluctuations in intensity could only be observed in a few in the visible range. 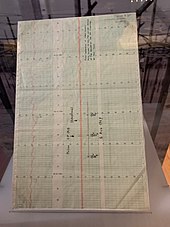 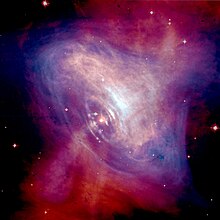 Image of the pulsar in the Crab Nebula ( M 1 ) combined from images in the areas of visible light (red) and X-rays (blue ). It shows fog gases in the environment, which are carried along by the magnetic field of the rotating pulsar and thus "stirred" and stimulated to radiation .

Jocelyn Bell and her PhD supervisor Antony Hewish discovered the first pulsar while searching for radio sources on November 28, 1967 at the Mullard Radio Astronomy Observatory near Cambridge. For this investigation, all sources were recorded in a broad field, which showed strong fluctuations in their radiation intensity within a short time. The signals from the pulsar, later referred to as PSR B1919 + 21 , were characterized by the unusual regularity of the waves emitted, so that Bell and Hewish initially mistook them for an artificial signal - possibly an extraterrestrial civilization ( Little Green Man 1 ). Antony Hewish was awarded the Nobel Prize in Physics in 1974 for the discovery of pulsars .

The first physicist to suspect rotating neutron stars behind pulsars immediately after their discovery was Thomas Gold in 1968/69. However, a specialist conference initially rejected his corresponding lecture as too absurd and did not even consider it worth discussing. But his opinion was later confirmed.

Russell Hulse and Joseph H. Taylor Jr. discovered the pulsar PSR 1913 + 16 in 1974 , a system of two neutron stars orbiting each other in less than 8 hours, one of which is a pulsar. Their orbital period is constantly shortened in a way that can only be explained by the radiation of gravitational waves according to the general theory of relativity . In 1993, Hulse and Taylor also received the Nobel Prize in Physics for this. By May 2006, approximately 1700 pulsars were known, including one double pulsar (the PSR J0737-3039 system discovered in 2003 ).

A pulsar that is special in its formation is the PSR J1903 + 0327 , which moves in a strongly elliptical orbit around a sun-sized star , which rotates at 465 revolutions per second.

In 1982 the first millisecond pulsar with the designation PSR B1937 + 21 was discovered. The stability of its rotation period of 1.5578 milliseconds - after taking into account a linear increase - is better than 10 −14 , the precision of atomic clocks of that time . This accuracy can be used for a precise determination of the earth's position in order to provide further evidence for gravitational waves.

The most important catalog for pulsars is the " Catalog of Pulsars. " By JH Taylor, RN Manchester and AG Lyne. In it, pulsars are designated with the letter combination PSR and their celestial coordinates , for example PSR B0525 + 21 . The number combination 0525 indicates the right ascension in the equatorial system ( 05 hours and 25 minutes ), +21 the declination in degrees. The letter B means that the coordinates refer to the Bessel epoch B1950.0 . Today we use the Julian epoch J2000.0 , indicated by the letter J . Since the celestial coordinates are different depending on the standard epoch, the same pulsar has different names. For the pulsar mentioned above, the result is PSR J0528 + 2200 (right ascension 05 hours 28 minutes, declination 22 degrees, 00 minutes) . Both names are still in use.

Formation of a pulsar 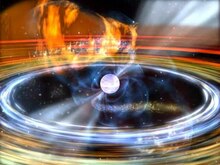 Play media file
Artistic interpretation of the creation of a pulsar 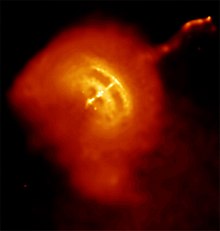 The Vela Pulsar , a neutron star left over from a supernova explosion, flies through space on one of its hot plasma jets. Photo: NASA .

A pulsar draws its radiant energy

Due to the preservation of the angular momentum and the sharp reduction in spatial expansion, the rotation of the neutron star accelerates so much that the rotation time is only seconds or fractions of a second instead of several days. The result is a very compact celestial body with a strong magnetic field (typical flux densities of 10 8 Tesla ) that rotates rapidly within the ionized gas nebula . 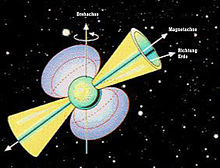 A pulsar emits electromagnetic waves over a wide range of waves, the predominant components can be in the frequency range of radio waves (radio pulsar ) , visible light or in the range of X-rays ( X-ray pulsar ). Younger pulsars tend to give off higher energy radiation.

The rotation speed and rotation energy of a pulsar can be estimated using simplified assumptions. The initial body is similar to the sun and has a constant density, just like the contracted neutron star.

The moment of inertia Θ (Θ = 2/5 · M · R²) decreases quadratically, when the radius R decreases, at constant mass M . Since the angular momentum L ( L  = Θ · ω) is retained, the speed of rotation ω must increase by the ratio of the moments of inertia of the sun and neutron star. The rotational energy E increases by the same factor ( E rot = 1/2 · ω ·  L ).

This results in the following values:

In the simple estimate, the orbital speed at the equator of the surface would be a multiple of the speed of light . Since this is impossible, a star can only contract if it repels mass and reduces its angular momentum. The rotational energy is in the range of 10 40  J.

A pulsar is a rapidly rotating neutron star. The axis of symmetry of its magnetic field deviates from the axis of rotation, which is why it emits synchrotron radiation along the dipole axis.

Pulsars with a rotation time of less than 20 milliseconds are called millisecond pulsars. The record holder is PSR J1748-2446ad in the globular cluster Terzan 5 with a rotation frequency of 716 Hertz (1.4 milliseconds rotation duration) . In addition to their faster rotation, millisecond pulsars also differ from normal pulsars in their weak magnetic field of less than 10 4 Tesla , their slow decrease in rotation, their high characteristic age and, at 75 percent, their preferred occurrence in binary star systems compared to other pulsars with less than 1 percent. The maximum rotation frequency for neutron stars is likely to be around 1500 Hertz, since at higher rotation speeds a strong radiation of gravitational waves sets in.

Two scenarios are known for the development of millisecond pulsars:

A large number of millisecond pulsars have been found in recent years through intensive radio observations of globular clusters . The high abundance is associated with the high star density in these stellar aggregates, whereby neutron stars can capture a companion and accrete matter from it. In this phase as an X-ray double star of low mass (LMXB), the rotation of the neutron star is accelerated to the values ​​typical for millisecond pulsars. Surprisingly, in addition to a large number of millisecond pulsars, normal young pulsars with a rotation duration of a few hundred milliseconds and magnetic fields around 10 7 Tesla were discovered in the globular star cluster . This was unexpected, as there are no more massive stars in the old globular clusters that could lead to the birth of a normal pulsar via a supernova . One hypothesis is that the globular clusters gravitationally captured and bound these pulsars. Pulsars usually have a high intrinsic motion , which was caused by asymmetrical supernova explosions or by the destruction of a binary star system in the supernova phase. The idea of ​​capturing a companion and the subsequent recycling of the pulsar through the accretion of the companion's matter is confirmed by the large orbital eccentricity of pulsars in globular clusters, which has been observed in some cases . The orbits in close binary star systems should be circularized after a few 10 million years due to tidal effects and therefore these pulsars must have been revived a short time ago.

Young pulsars show an average self-movement of typically around 400 km / s with peak values ​​of more than 1000 km / s. These speeds are too fast to be interpreted as a result of a binary star breaking up during a supernova explosion. The following hypotheses have been set up for the high proper motions, all of which are attributed to an asymmetry in the supernova:

In addition to a continuous increase in the duration of rotation, pulsars also show period jumps (glitch), in which the rotation of the neutron star accelerates within a very short period of time. The rotation time then increases faster than before until the original value is reached before the jump . The discontinuous change in the period of rotation occurs in almost all pulsars except for millisecond pulsars and young neutron stars with an age of less than 500 years. The period jumps are interpreted as a transfer of angular momentum from the superfluid interior of the neutron star to the slower rotating crust. However, this model can hardly explain anti-glitches, in which the rotation period of the neutron stars increases by leaps and bounds. The period jumps have also been demonstrated in unusual X-ray pulsars . The jump activity, the cumulative change in period per year, continuously decreases with the age of the pulsars. It offers an opportunity to study the interior of the neutron star.

Nulling is the temporary complete disappearance of pulses in some pulsars. The transition from a normal pulse to the off state can take place within a period of two pulses, and switching on can take place just as quickly. Most pulsars affected by nulling take a 5 percent time-out, which appear randomly. The record holder is likely to be J1502-5653 , in which no pulse can be detected in 93 percent of the observation time. The cause of the nulling and the rapid switching between the two states is the subject of scientific discussions. During an off phase, the slowing down of the rotation of the pulsar decreases. Therefore, the emission mechanism should really be switched off and the nulling should therefore not be the result of radiation in a different spatial direction.

Rotating radio transients could represent an extreme form of nulling . With these pulsars, with rotation times of 0.4 to 7 seconds, only individual pulses at intervals of 10 1 to 10 4 seconds can be detected. These are pulsars, as individual neutron stars change transiently between the two forms pulsar and rotating radio . The low probability of detecting rotating radio transient suggests that there are five to six times more neutron stars in the Milky Way than previously thought. Therefore, the core collapse supernovae should occur correspondingly more frequently or alternative sources of origin should exist.

In the area of ​​radio waves, individual pulses with high intensity occur. A small number of pulsars, including the pulsar in the Crab Nebula, show particularly high pulse peaks. The pulse durations are a few nanoseconds to microseconds. The phenomenon of giant pulses only seems to occur in very young and therefore rapidly rotating pulsars. Compared to radio radiation, the intensity of the gamma and X-rays remains unchanged during the giant pulses. It is believed that the giant pulses have the same cause as the nulling.