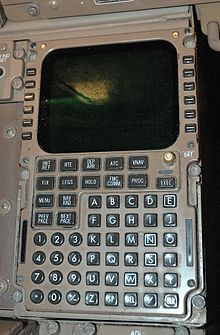 The first FMS were developed in the late 1970s. The first use took place in 1981 in the Boeing 767 . These FMS were based on the combination of the inertial navigation system INS and the Performance Data Computer .

FMS simplify lateral navigation, offer the possibility of programming vertical profiles and increase the pilots' overview through map displays on the multifunction displays (MFDs) of the electronic flight information system EFIS . The pilots can use it to carry out planning and optimization during the flight. With the introduction of "Area Navigation" ( RNAV ), shortened, direct flight routes and airways became possible, as well as new types of approach (e.g. RNAV approaches).

Modern flight management systems combine the navigation with the flight control and the autopilot , as in the "Flight Management and Guidance System" (FMGS) from Airbus. Depending on the model, take-off and approach calculations, vertical flight profile management (altitude, climb and descent) and fuel management are also carried out. The ACARS data link and communication system , which can also be operated with the MCDU, can supply the FMS with flight plan, wind or other data.