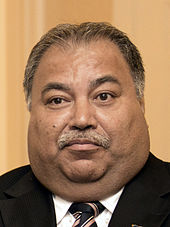 Waqa obtained a Teachers Training Certificate from Nasinu Teachers College in Suva in the Pacific island state of Fiji in 1981 and graduated from the University of the South Pacific with a Bachelor of Education degree in 1986 . He then studied in Australia at Monash University in Melbourne , where he obtained a Master of Educational Policy & Administration degree in 1993 .

In the parliamentary elections in May 2003, Waqa was elected to the Nauruan parliament for the Boe constituency. During the presidency of Ludwig Scotty Waqa was Minister of the Interior and Education, but had to give up this post again when Scotty defeated René Harris in a vote of no confidence . Waqa, however, remained as a member of parliament.

On April 23, 2004, Waqa and his parliamentary colleagues Kieren Keke , David Adeang and Fabian Ribauw took part in violent protests at Yaren International Airport . It was demonstrated against the government's policy regarding the Afghan asylum seekers in the Australian internment camp on Nauru and against the “deadlock” of parliament. All four politicians face up to 14 years imprisonment for participating. However, the sentences were lifted when Ludwig Scotty regained the presidency on June 22, 2004. Waqa was reappointed Minister of Education by Scotty.

On June 11, 2013 Waqa was elected as Sprent Dabwido's successor to President Naurus and then formed his government . He was confirmed in this office in the regular parliamentary elections in July 2016.

In the 2019 parliamentary election , Waqa in the Boe constituency only achieved the third highest value in the vote count and thus missed re-entry into parliament.

Waqa is also one of the few composers in Nauru, but composing music is his hobby. His works are repeatedly performed on Aiue Boulevard in Orro , but are hardly known outside of Naurus.

President of the Republic of Nauru