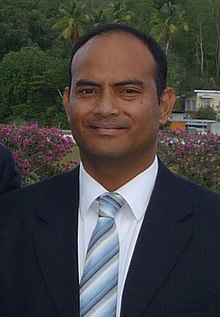 David Adeang (born November 24, 1969 ) is a Nauruan politician . He is one of the founding members of the Naoero Amo party , currently the only successful political party in Nauru.

David Adeang is the son of former President Kennan Adeang . He began his political career as a lawyer . In the last general election on May 3, 2003, during political and economic turmoil, the Naoero Amo won 3 of the 18 seats in parliament; one of them went to Adeang. The Naoero Amo went into a coalition with Ludwig Scotty and his supporters. Scotty was elected president, and shortly thereafter he appointed Adeang as treasury secretary. He kept that post until three months later in August 2003, Scotty's government fell by a vote of no confidence and Kinza Clodumar was appointed Treasury Secretary by René Harris .

On June 22, 2004, Clodumar and the Naoero Amo united to support Ludwig Scotty in the successful vote of no confidence against Harris. Clodumar remained Minister of Finance while Adeang became Minister of Foreign Affairs and Justice. His appointment as foreign minister is interesting because he is the first foreign minister who is not also president. Since independence in 1968, every president was also foreign minister.

In August 2007 Adeang was re-elected and even nominated as a presidential candidate by the opposition; However, Adeang declined on the grounds that it was not a game, after which he himself nominated Scotty. Scotty then clearly won the presidential election against Marcus Stephen . After the successful vote of no confidence in Scotty's government in December 2007, Adeang was forced to resign as Secretary of State. The reasons for the no-confidence vote were a. Accusations of corruption and lack of transparency against Adeang in connection with relationships with Asian business people; the investigation is currently ongoing.

On March 18, 2008, the deposed opposition around Scotty and Adeang tried to force another vote of no confidence. However, since the incumbent Speaker of Parliament, Riddell Akua , who chaired such a vote without participating in the vote, resigned immediately and none of the opposition agreed to take up this post, no vote was taken. On March 20, 2008, after numerous nomination attempts, Adeang surprisingly accepted the office of speaker of parliament. After the new elections on April 26th, Adeang resigned as speaker of parliament.

Members of the Nauruan Parliament