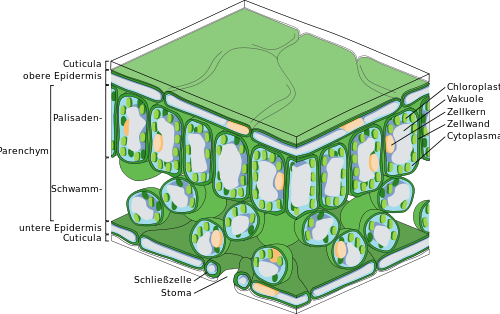 Anatomy of a leaf. The cuticle can be seen as the top layer.

The cuticle of plants is a waxy coating that is only formed by epidermal cells in leaves , young shoots and other tissues exposed to the air without a periderm . Due to its hydrophobic properties, it reduces water loss; for plants in dry areas to 0.01% of what a free water surface of the same size would give off. In places where replacement is necessary, however, the cuticle can also be porous or cracked. The rhizodermis has no cuticle at all in order not to hinder the absorption of water and nutrients.

The cuticle consists of an insoluble, cuticular membrane impregnated with and covered by soluble waxes. Cutin is the best known structural component of the cuticular membrane. The cuticle may also contain a non-saponifiable hydrocarbon called cutane . The epicuticular waxes that cover the cuticle consist of a mixture of hydrophobic, aliphatic compounds, hydrocarbons with a chain length of 16 to 36. The cutin is synthesized as a monomer in the epidermis and then cross-linked in the cuticle. The same applies to the wax deposits and deposits, which however simply diffuse into and through the cuticle . To do this, they are presumably dissolved in short-chain hydrocarbons that evaporate at their destination . But lipid transfer proteins are also involved.

The plant cuticle can follow growth, in contrast to that of insects , which have to molt. This is due to the fact that cross-links in the cutin matrix can be broken up by cutinases and further monomers can then be incorporated. If the cuticle grows faster than the epidermis, cuticular folds occur. This leads to a poorer wettability, due to the surface tension, water droplets can only touch the tips of the cuticular folds and are therefore more difficult to hold. The cuticle also serves as a defense, as virus particles, bacterial cells and spores or growing fungal filaments are washed off when it rains. Very thick cuticulae can also be found in plants in very dry locations. These are chemically and mechanically difficult to attack and also withstand the chewing tools of smaller animals.

Epicuticular waxes can also be deposited on the cuticle. These crystalloids can take on numerous shapes, as needles, plates or packets, seemingly arranged in a confused or systematic manner, etc. Thick wax deposits can already be seen with the naked eye; they have a ripe effect, as in the case of plums or cabbage leaves. The wax coatings further reduce transpiration , reflect or scatter incident light, increase air turbulence above the surface, so that the heat exchange is increased and the wettability, as well as the cuticular folds, is reduced. The latter is particularly pronounced in the lotus flower ( Nelumbo nucifera ), so that the effect is named after it as the lotus effect (described by Barthlott and Neinhuis, 1997). Thick layers of wax, like a thick cuticle, can protect against being eaten by sticking together the mandibles and tarsi of the animals.

While with the cuticle a Akkrustierung is (Bearing), it can also lead to encrustations (retention) of suberin or cutin. In this way, the cell walls can become impermeable not only to water but, in the case of cork, also to air (impressively demonstrated on the champagne cork). Inorganic substances can also be stored in the cell wall, such as calcium carbonate and calcium oxalate in the umbrella algae Acetabularia. Silicic acid can be found in grasses and diatoms . The storage makes the cell wall harder, but also more brittle (more inelastic).

The cuticle was formed more than 450 million years ago during the transition of plants from water to land together with stomata , xylem , phloem and intercellular cells in the mesophyll tissue, first in the trunk, later also in the leaf. A combination of these innovations made it possible for the plants to reduce water loss by shifting the gas exchange to the interior. Enclosed by a waterproof membrane and limited by openings of variable width, the stomal cells can regulate perspiration and CO exchange.