In botany , rhizodermis is the term used to describe a mostly single-row closure tissue of a plant root . Alternative names are root skin , epiblema or root epidermis . In addition to the absorption of water and dissolved minerals, the formation of root hairs and thus the significant enlargement of the absorbent root surface is an important task of the rhizodermis.

Root hairs consist of a single cell that extends from the rhizodermis in a hair-like manner into the ground. The attachment takes place in a zone of high division activity, with a root hair usually emerging from a small protuberance (a papilla ) at the apical end of the rhizodermis cells. The apical end is understood here as the end closest to the tip of the root . In many plant species the root hairs can form from all rhizodermis cells, in others the hair formation is limited to certain specialized cells ( trichoblasts ), which are distributed in a regular pattern on the rhizodermis surface. The application and growth (extension growth) of the root hairs run synchronously in the individual root sections. The oldest hairs are the longest, those closest to the root tip are the youngest.

Root hairs can only be found on young, growing roots. They are usually only viable for a few days (three to nine days). They have a diameter of 5 to 17 micrometers and a length of 80 micrometers to 1.5 millimeters. Due to the mass of root hairs formed, for example around 10 billion root hairs with a total length of 10,000 km in a rye plant , there is a significant increase in the resorbable root surface. Since root hairs have a tip growth, they help the roots to better penetrate the soil. Increased water absorption is possible through the root hairs. The surface for the absorption of water in the soil is therefore larger in most plants than the surface of the above-ground shoot, where the water is released through the leaves and evaporates.

Root hairs are in close contact with their environment and are often grown directly with the earth particles. When moving plants, the root hairs are usually broken off or damaged. The result is a lack of water for the plant in the next few days until new root hairs develop. 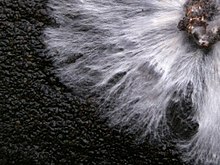 Mycelium of the oyster mushroom , here grown on coffee grounds

Not all plants have root hairs, for example all naked-seed plants have to do without these water-absorbing surfaces. Most of these plants, however, have developed protective mechanisms against excessive water evaporation, such as conifers (Pinophyta), or about mycorrhizae from the mycelium braid of symbiotic living fungi supplied with water and nutrients.

The root hairs are surrounded by a carbohydrate-containing mucus, which they release through the cell wall and which enables a biofilm of microorganisms. The contact with its environment (the rhizosphere ) is intensified through the mucus , the nutrient salts can already be prepared in this environment and then absorbed for forwarding, exudates are released and the carbohydrates serve as exchange nutrients for mycorrhiza .

In contrast to the root hairs, lateral roots are not formed from the root skin, but from the pericycle of the central cylinder . In addition, side roots do not grow positively geotropically (in the direction of gravity), but often at right angles to the main root.