The title of this article is ambiguous. Further meanings are listed under cog (disambiguation) . 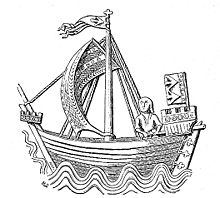 The cog was a type of sailing ship from the Hanseatic League , which was primarily used for trade , but could also be used as a warship in times of military conflicts between the Hanseatic cities with pirates. She has a mast and a square sail . A lookout called a crow's nest was sometimes placed just below the top of the mast . Aft (rear) cogs owned the aft fort and in the course of the 14th century a bow fort was often added to the bow (ship's tip).

Model of a cog ( Bremer Kogge ) 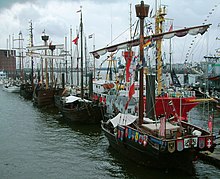 Four cog replicas at the Hamburg harbor birthday in 2007

The early cog type of ship is a product of the merging of two different early medieval shipbuilding traditions. One branch of development can be traced back to the Frisian region via the cog-typical cauliflower clips, also called Sinteln. As part of the caulking , in which the gaps between the wooden components of the ship, especially the planks, were closed with pitch and tow , they were used to seal the ship. The oldest finds of Sinteln date from around 900 AD in the Lower Rhine region . The first historical sources about a ship type "cog" can also be found on the Lower Rhine from this period. This is likely to mean flat-bottomed and keelless, i.e. wadden sea-compatible merchant ships with which goods were transported to Hollingstedt and Stade on the Lower Elbe , for example . Numerous Sinteln from the Viking Age were also found there during excavations .

This Frisian shipbuilding tradition came from Hollingstedt at the latest by the beginning of the 12th century, following the most important trade route in Northern Europe via Schleswig, which is only 16 km to the east, to the Baltic Sea region. Here at the end of the Schlei , once the hub of Northern European trade, ocean-going ships have been built according to the Scandinavian building tradition for centuries . The resulting overexploitation of the surrounding forests and the steadily increasing volume of goods demanded a type of ship that had much more mercantile features than the traditional Scandinavian merchant ships, which had excellent sailing properties even on the high seas, but an enormous one with their planks split radially from oak logs Needed wood and, due to the bit system (transverse struts, see Viking shipbuilding ) of the hull, initially had a comparatively severely restricted cargo space.

The early cogs of the 12th century, such as the find near Kollerup on Jammerbucht in Denmark, already had planks that were tangentially split from the trunk. The hull was very bulbous with a large hold throughout. The planks of the side walls were geklinkert ( clinker ) that of the ground on impact ( Kraweelbauweise set). The plank connections were created with double-folded nails, the so-called spike, as is typical for a cog. The caulking seam is closed with the help of sintels . Otherwise the ship with just towering carries Steven and a mast with square sail other typical features of a cog. The shorter construction times and costs compared to the Scandinavian cargo ship, as well as the payload of this new type of ship, were completely adapted to the growing economic needs.

According to leading naval archaeologists, this early cog shows for the first time the developmental step from a coastal ship suitable for the Wadden Sea to an ocean-going merchant ship. It also has clear Scandinavian features. This makes it clear that this new type of ship must have been developed in a contact zone of the Frisian and Scandinavian shipbuilding tradition, as was well documented in Schleswig. According to the dendrochronological investigations , the wood was felled in southern Jutland, for example in the area between Schleswig and Hadersleben (DK). Since the oldest finds of Sinteln in the entire Baltic Sea area are available from Schleswig, among others, there are increasing indications that the development step towards the seaworthy “Proto” cog may have been completed in Schleswig. This laid the foundation stone for the most important type of ship of the late Middle Ages , which, as the Hanseatic packhorse, made a significant contribution to the success of the trading power.

The length of the late medieval cogs was about 20–30 m, the width 5–8 m. The sail area was around 200 m². According to tests with replica cogs, the speed was around 3.5 knots with wind force 3 and 6 knots with wind force 6. Cogs could therefore travel faster than wagons on land even in moderate winds. However, there were problems with headwinds. Cruising was probably only possible in weak winds, as the ships were relatively wide for their length. In return, a cog with a comparatively small crew could transport large quantities of cargo.

The load capacity - depending on the size - was 40 to 100 loads , corresponding to 80 to 200 tons of weight. Until the end of the 14th century , cogs were the most important larger type of ship in the Hanseatic League. Their merchant fleet at that time had a total carrying capacity of around 100,000 tons. In comparison, the carrying capacity of only a modern container ship is up to 200,000 tons.

At the end of the 14th century, the cogs were more and more replaced by the similar Holk , then by the Kraweel .

In 1962 the Bremer Kogge was found in the Weser near Bremen . Based on this find, the crack in a cog, especially the longitudinal section of Kiel and Steven, could be authentically documented for the first time.

Remains of a cog in Kolding - Fjord on the east coast of Jutland (DK) were first discovered 1,943th Individual parts were recovered, measured and returned to the site in the same year. The knowledge of the position of the wreck site and the parts was lost. In 1999/2000 the place could be rediscovered. In 2001 the ship was salvaged. The planks were dendrodated to the winter of 1188/89. The ship should have been about 16 m long. Preservation is currently taking place in the Koldinghus Museum .

In 1978, the well-preserved remains of an early cog were discovered in the dunes near Kollerup in Denmark on Jammer Bay in northwestern Jutland. The oak wood used was felled according to dendrochronological studies around 1150 in South Jutland, for example in the area between Schleswig and Hadersleben. This ship find is the oldest of the cog type to date. Obviously one of the early voyages around Cape Skagen had been dared and failed (length: approx. 20.9 m; width: approx. 4.92 m; draft: approx. 1.35 m). 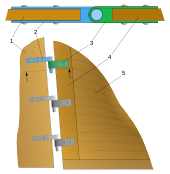 Stern rudder of the cog

In 1983 the remains of a cog from 1336 were uncovered in the polder near the Dutch town of Nijkerk . The soil in which the wood had been preserved was the previous bottom of the Zuiderzee, which was drained at this point . The find served as a template for the cog replica Kamper Kogge made in 1997 and now located in Kampen , the Netherlands . In 2004 the ship demonstrated its seaworthiness on a trip to the Baltic Sea.

In 1990 the remains of a small cog about 8.5 m long and 3.5 m wide were recovered from Pärnu in Estonia. Using the C14 method , the wreck was dated between 1250 and 1330 AD. Shards of imported pottery from the Rhineland as part of the cargo date from the 14th century.

In 1991/92 a cog-like ship was found and partially recovered at a depth of 14 meters under the Schlachte , the old port area of Bremen , which was built on the basis of a shallowly hollowed oak trunk with many half- frames and a stern rudder . This “Proto-Cog” is the world's first ship of this type. The dendrochronological investigation revealed the year 1100 as the construction time, which confirmed the results of the C14 dating .

In 1997 the wreck of a ship was discovered off the island of Poel in Mecklenburg , which was initially dated to the year 1354 ( Poeler Kogge ). According to a more recent investigation, this ship, which was probably built in Finland, is said to be much younger and from the year 1773, so it is very likely not a cog. An attempt at reconstruction based on the interpretation of the cog has now been completed in Wismar and was baptized in the name of Wissemara .

A large and well-preserved cog was found in Doel, a district of the Belgian municipality of Beveren , in 2000 : about 20 meters long and 7 meters wide. The oak wood used to build the ship was felled in Westphalia in the winter of 1325/26 according to dendrochronological studies . The hull of this early cog is made of clinker construction. For unknown reasons, the Doeler Kogge sank into an arm of the Scheldt around 1404 . The wreck came to light during construction work on the Deurganck container terminal in the port of Antwerp . After the conservation work has been completed, it will be exhibited in the Maritime Museum in Baasrode, a district of the Belgian city of Dendermonde .

In 2015 the wreck of an approx. 20 meter long cog was recovered from the bottom of the IJssel near Kampen .

Meaning of the word cog

Research does not yet agree on the origin (or meaning) of the word cog (formerly also the cog ). Some linguists attribute it to Latin - French cocca ('shell'), others because of its compact shape in the High Middle Ages to the root of the word for ball or round, vaulted vessel (Kog, Kuggon). Noteworthy here is that kaggi is in Old Norwegian and Old Icelandic for barrel (Swedish: kagge ) while KAG / kaag in the low German and Dutch watercraft means (see also Engl. Keg ).

Another explanation is sought in the derivation of a word for a stake or cone (Kag, Kaak), which would lead back to the dugout canoe as the origin.

A whole series of other ship names can be derived from words that denote something split. This split designates either the lengthwise split dugout canoe, which was widened with planks or planks, or the planks themselves, which were also used to raise the ship's side. In this regard, the derivation of the Latin cōdicāria 'split wood' seems plausible.

In the club emblem of the Hansa Rostock football club, a cog is shown as a central element, from which the club's nickname Hansa-Kogge is derived.

Finds and replicas of cogs