A ship fort refers to a structure on a ship, which was mainly on historical sailing warships and served military purposes. 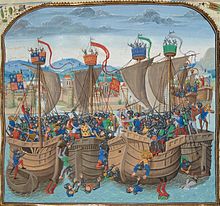 Example of stern, bow and top fort on ships; Illumination in the Chroniques of the French historian Jean Froissart (around 1337 - around 1405)

There were up to three types of fort on such a historic sailing warship:

Originally the different forts (except mast fort) were developed on a ship as a raised platform (e.g. in the form of towers) for archers to be able to fight enemy ships from an elevated position. In the course of time these platforms were fortified more and more, so that finally a fortification-like structure, similar to that of a fort, resulted. Apart from the mast fort, which was mainly designed as an attack facility, a ship fort thus served as a defensive fortification and defense system on a ship in order to be able to defend against attackers who wanted to board your own ship.

The ship's fort went through various stages of development. At the latest when cannons, archers and gunfire replaced the ramming maneuver followed by a boarding battle, the bow fort was no longer needed to the extent it was at that time and was finally reduced considerably during the 16th century. Later ships such as galleons no longer needed a massive bow fort, so that this was usually reduced to a one-story deck integrated into the hull. 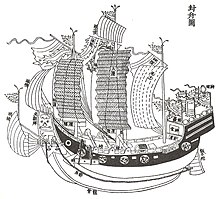 Drawing of a junk with "attached" stern fort

According to today's knowledge, the first known forts on ships were on rowing ships of the Roman Empire equipped with ram rams, although these looked more like wooden towers than a fortress. Partly equipped with two towers, archers could fight the enemy from an elevated position. At the time of Gaius Iulius Caesar , a bowsprit was also installed on which, in addition to an additional sail, additional rows of blades could be installed so that at least the enemy ship could be untackled and thus immobilized in the event of a failed ramming maneuver. In addition, the towers were equipped with catapults and ballistae , so that Caesar managed to land successfully with these powerful ships, for example in England.

The Vikings also fitted their ships with bow fortifications as early as the 8th century. On the Bayeux tapestry , the longships with which the Normans invaded England in 1066 are depicted with attached platforms for archers at both ends of the ship.

The first top fort was built in the 13th century on the masts of warships at the time, while the first combined bow and stern fort was established at the beginning of the 14th century. In some cases, detachable forts were installed on requisitioned merchant ships to provide space for archers and slingshots - at the end of certain phases of the war these forts were dismantled again and trade continued. Over time, these forts were integrated more and more into the ship's hull.

In the 15th century the officers were traditionally accommodated on galleons in the stern fort, while the seamen who had been recruited had their accommodation in the bow fort.

In the same century, the bow fort disappeared almost completely from the warships, as it had a strong negative influence on the seaworthiness of a sailing ship. For example, if a carrack comprised several floors, the wind had a large area of ​​attack, so that maneuverability in strong winds was severely restricted. The large area of ​​attack for the wind had the effect that the fore ship always tended to leeward and thus sailing close to the wind was hardly possible. In 1570 a move was made to put considerably flatter bow fortifications on the ships. Experiments by English shipbuilders at the time also showed that ships with a low bow and a high stern were much faster and more agile. This was followed and the new English ships made flatter at the front, which finally turned out to be an advantage for the British in the battle against the Spanish Armada in 1588, along with several other favorable factors . From then on, this method of shipbuilding determined the seas and was retained until the late 18th century.

In today's parlance, the English term forecastle , which stands for Bugkastell or "front castle" and is derived from the described development history, the bow , although except for historical replicas located on ships of the presence of no more fort.