The title of this article is ambiguous. For the TV series, see Luv and Lee (TV series) . 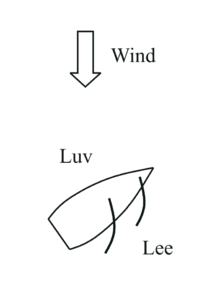 Windward and leeward sides of a sailing boat

Luv [ lu: f ] and Lee [ le: ] name the sides of an object in relation to the wind . Windward is the side facing the wind and leeward the side facing away from the wind. The terms come from the seaman's language .

The terms windward and leeward became established in other areas from the 17th century onwards, such as meteorology or geography .

For the tactical command of sailing warships, the term windward or leeward position was of particular importance, i.e. the relative position of a ship or a fleet to the opposing one:

As a rule, a fleet always tried to reach the windward position in relation to the enemy fleet in order to be able to maneuver more freely itself. An inferior fleet trying to evade combat usually had to prevent just that.

In addition, the windward or leeward position plays a role in the rules of evasion between sailing vessels .

In shipping, the fact that the sea is noticeably calmer on the leeward side of the hull than on windward is used, for example when a pilot has to be transferred or a boat has to be launched or taken on board. The maneuver in which the ship is turned to wind and sea in such a way that it calms the sea as well as possible is called leewarding . In the case of a life raft that is lowered into the water in an emergency (i.e. when a ship sinks), a so-called sea anchor opens automatically , preventing the boat from drifting leeward and holding the boat in the sea.

Ships that have seaplanes on board that have to land in the water ( aircraft mother ships ) also facilitate their landing by first going against the wind and then steering a 90 ° turn. This allows the seaplane to land upwind and take advantage of the ship's calm, sickle-shaped wake .

Windward and downwind in aviation

In aviation, the terms windward and leeward are used for the side of an obstacle or aircraft facing or facing away from the wind.

Windward and leeward in geography

In topography and landscape ecology , windward and leeward refer to the side of a ridge, a mountain range or a weather divide facing or away from the main wind direction . On the windward side, the windward side of such a topographical obstacle, the air masses are forced to rise, which cool down in the process, so that uphill rain falls. Lee refers to the leeward side of the obstacle, where the air masses drop again and become a foehn as downdrafts , which is why significantly less precipitation falls on the leeward side.

For example, on dunes on the windward side, the wind removes them , while on the leeward side, due to the reduction in the horizontal moment of movement of the air masses falling down, the particles transported by the wind fall down and are deposited as aeolian sediments . This explains not only the shifting of shifting dunes , but also the sedimentation of the loess deposits , which are mainly to be found in basins and on slopes exposed to the east .

The fluid dynamics is the science of physical behavior of fluids ( gases and liquids ). In the lee of bodies in flows arising vertebrae (often 'Leewirbel' called). They play an important role in meteorology and aerodynamics . A distinction is made between bodies with a flow around both sides (e.g. high-rise buildings and wings , see also Kármán's vortex street ) and bodies with flow around one side (e.g. a railway embankment).