The Bremer Straßenbahn , abbreviated BSAG , is a municipal transport company based in Bremen . The corporation operates a large part of the local public transport in the city, including the Bremen tram , which has existed since the end of the 19th century, and the city ​​bus service in the Hanseatic city. The company was also responsible for the trolleybus that ran from 1949 to 1961 . It is also a public railway infrastructure company and in this function operates the Bremen industrial main track "Richard-Dunkel-Straße". The municipality of Bremen indirectly owns 99.03% of the shares in Bremer Straßenbahn AG through the city's own Bremer Verkehrsgesellschaft mbH .

With the exception of the Bremen-Nord area, the urban area is served by tram lines along the Weser, as well as in some settlement areas north and south of the city center . Since the late 1990s, steps have been taken to connect settlements and suburbs further outside the urban area. The bus routes complement the remaining areas and connect the tram routes with each other. Central hubs are the main train station , Am Brill and Domsheide .

→ The route overviews can be found under local transport in Bremen .
→ For the route network, see also the Bremen tram under route network and history.

99.03% (according to other information 99.11%) of the shares belong to the Bremer Verkehrsgesellschaft mbH, which in turn belongs entirely to the municipality of Bremen. The remaining shares are in free float. There is a control and profit transfer agreement with the Bremer Verkehrsgesellschaft. The shares (ISIN: DE0008222001) were included in the regulated market of the Hamburg Stock Exchange.

Bremer Straßenbahn AG has a direct or indirect stake in several transport companies in north-west Germany through its subsidiary Weserbahn GmbH . These include Delmenhorst's local transport company Delbus (51%) and the regional bus and railway company Verkehrsbetriebe Grafschaft Hoya (25.1%). In addition to its involvement in passenger transport, BSAG also has a 10% stake in the freight transport companies Bremen-Thedinghauser Eisenbahn and Jade-Weser-Bahn.

With sales increasing from 80 to 104 million euros in the years 2009 to 2016, BSAG generated a loss of around 50 million euros each time. To promote local public transport, the losses are borne by the city of Bremen. A total of 9.45 million euros was spent on 30 buses that went into operation on March 31, 2012. 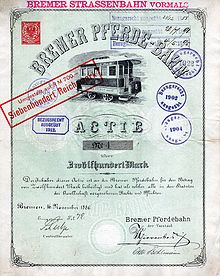 Bremer civil engineer Carl West Field, who lived for years in the United States and experience with horse tracks in Chicago, had requested on April 12, 1875 with the Senate , the concession for a horse ride from Bremen stove Thor after Oberneuland.

On March 28, 1876, Julius Brabant and others founded the Bremer Pferdebahn company. Westenfeld transferred the concession, which was granted to him on April 7, 1876 for a period of 20 years, to the new company, and on June 4, 1876 the first line went into operation.

The rival company Große Bremer Pferdebahn opened its first own line from Hastedt to Walle with British capital on November 3, 1879 .

In the following years, both companies expanded their grids and prepared for electrification. In this context, the Bremer Pferdebahn was renamed the Bremer Straßenbahn in 1891, and in 1892 the first regular electric line went into operation. The Great Bremen Horse Railway , on the other hand, continued to run on horses and was taken over by the Bremen tram in 1899 .

For the bus operation , the Bremer Straßenbahn founded the subsidiary Bremer Vorortbahn Gesellschaft (BVG), which carried out the bus operation on the outer lines from 1924, first to Oberneuland and later to Blumenthal.

Since December 2018, payment methods such as Google Pay , Apple Pay and the Sparkassen mobile payment app have been gradually approved for ticket machines until mid-2019. E-tickets are available via the in-house FahrPlaner app .

With the timetable change in May 2020, lines 51 and 53 were replaced by lines 26 and 27. In addition, there is now a superimposed 10-minute cycle between the main train station and Huckelriede on Sundays.